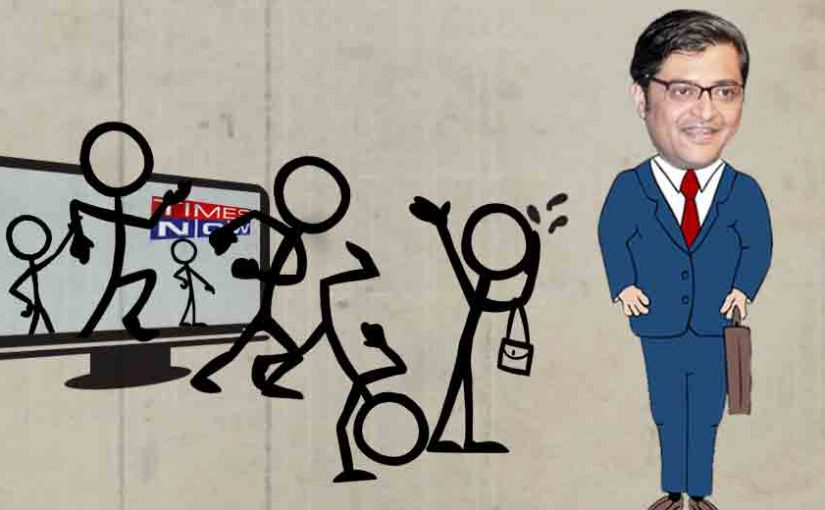 UPA UNITY: In his very first news hour, Arnab tried to discredit Mulayam Singh Yadav and Nitish Kumar the Bihar chief minister who has been projected as the prime minister of the combined opposition for the 2019 election

Former editor-in-chief of Times Now Arnab Roy’s news channel, Republic, is clearly catering to the extreme right-wing with the blessing of the Sangh Parivar

I AM working really hard, you know. I have no time,’ Arnab Goswami’s voice crackled over the phone. Still, our chat lasted close to half an hour. While I tried to get him to give me at least a few lines for this story on ‘Republic’ – his proposed media project – Goswami cleverly ducked all of them. Instead, his focus was on our years together as colleagues at NDTV. You are seen as right wing, what do you say to that? How will you make Republic global? Will you have bureaus abroad? No reply. Instead, all my questions were answered by short bursts of laughter, signature Arnab, followed by small talk – an obvious attempt to divert the conversation. The only thing he admitted on record was that this project will have its footprint across media platforms.

It seems there are gag orders for his prospective employees as well. “Five former Times Now reporters from the Delhi bureau will be joining Republic,” said a former Times Now colleague of Arnab’s unwilling to go on record. “Also a number of desk hands from Mumbai will be joining him, including Arnab confidante and chief producer Charu Thakur,” he added. Only one of the five admitted to quitting Times Now around the same time as Arnab, but refused to reveal his future plans. ‘I am going abroad for now. I have offers from CNN and BBC. I will take a call,’ he told me, again, not willing to come on record. He also told me that “every single Times Now employee has been issued a precautionary notice by management apprising them of the ‘no compete clause’ in their contracts.”

But truth be told, while there is a buzz about Goswami, the cult anchor in the national media, few reporters and journalists I spoke to – especially the senior lot – appear keen to work with him given his whimsical ways and reputation for the harsh handling of subordinate staff.

Much of the broad contours of Goswami’s project are already in the public domain. In a speech last month at IIT Mumbai, he outlined at least four defining features of Republic. For one it will be India’s first ‘independent media’. “India is on the brink of an independent media revolution,” Goswami had thundered earlier at a CII function in October just days before he quit Times Now. Secondly, the news will be ‘democratised’ riding on the ‘power of technology.’ Thirdly, Republic will be a global media project. After all, “For how long should we allow BBC and CNN to define the global media narrative?” And lastly, it will be ‘biased for the country’. “A media that is embarrassed to take a stand between India and Pakistan and pretends to be a bridge maker does not defend the interests of this country is not my kind of media”, he angrily remarked.

Is Goswami guilty of the trademark extravagance we are used to from his studio-pulpit? Or are his claims typical of media ‘untruths’ in the age of ‘post-truth’?

PERHAPS the most problematic aspect of the venture is his assurance that Republic will be an independent media platform. Will Arnab’s claim of editorial ‘independence’ hold out in the face of  his own biases, and the political and business interests of his largest investor, Rajya Sabha MP Rajeev Chadrashekhar?

Chandrashekhar was elected for a second term to the Rajya Sabha in 2012 with help from both the Bharatiya Janata Party (BJP) and HD Deve Gowda’s Janata Dal (S). In the run up to the 2014 elections, he supported and even provided funds to the Aam Aadmi Party (AAP), though he backed out when offered a ticket. The Independent MP now appears to have settled down in the National Democratic Alliance (NDA) and perhaps even BJP’s corner for the time being. He had shared a dais with top BJP leaders at a ‘Friends of BJP’ event in Bangalore in the run up to the 2009 general elections. The then BJP president Nitin Gadkari had appointed him as head of a study group that would outline BJP’s vision of ‘national development’. His proximity to the BJP’s B.M. Yedyurappa when he was Karnataka chief minister resulted in a recommendation for the Padma Bhushan honour. Currently, Chandrashekhar is the vice chairman of NDA in Kerala, a state the BJP desperately wants to win.

In November last year, Chandrashekhar introduced a bill in parliament that aimed at declaring Pakistan a ‘state sponsor of terrorism’, and called for snapping trade and economic ties – a demand that was welcomed by the Hindu right. He has been at the forefront of the One Rank One Pension (OROP) issue. He also runs a non-profit foundation called Flags of Honour dedicated to the cause of the armed forces. In addition he has raised a large number of questions relating to the army in the Rajya Sabha.

Critics allege that his new found love for the military is rooted in his business interests. Jupiter Entertainment Ventures Private Limited, through which Chadrashekhar has made his media investments, is part of Jupiter Capital, that is the holding company of Axiscades Engineering Technology Limited – a company that “provides technology solutions to aerospace, defence, heavy engineering, automotive and industrial production sectors”.

As NewsLaundry notes, its annual report (2015-16) recounts with satisfaction some of the contracts the company has bagged with the government including the supply of 88 Aircraft Recognition Training Systems (ARTS) and sundry other contracts. Chandrashekhar is also a member of the parliamentary standing committee on defence.

The Wire had questions on both his media and defence interests, and on the potential conflicts of interest involved, but Rajeev Chandrashekhar was not available for comment.

APART from Chandrashekhar’s business interests, his track record as a media owner – especially his guidelines for editorial recruitment – do not inspire confidence about the ‘independence’ of Republic.

Last year, Amit Gupta, the COO of his media arm Jupiter emailed a directive on ‘editorial hiring’ in which he said only journalists who had a ‘right-of-centre editorial tonality’, ‘pro-India and pro-military’ leanings, and were aligned to ‘Chairman’s (Rajeev Chandrashekhar’s) ideology’ should be hired by Asianet and the company’s other media properties. Gupta ‘withdrew’ the mail the very next day – though many proprietors make editorial hires on the basis of political alignment, the COO’s display of candour was presumably seen by Chandrashekhar as unwise and counter-productive. But the genie, once let out, is hard to put back in the bottle, especially when the anchor who will front Jupiter’s latest venture, Republic, makes no bones about his own orientation.

More than half of the staff in any news network are production hands with no editorial functions, while the real critical component of news gathering operations – the reporters – tend to be ideologically agnostic, and in television, no more than foot-sloggers for agenda driven editorial priorities. Republic, by this reckoning, will be no different.

The ‘ideological alignment’ sought by the Jupiter group’s chairman presumably has more to do with aligning the start-up news network to the BJP’s political objectives. These are wide ranging but its key elements include sharp anti-Pakistan rhetoric, essentially a metaphor for Indian Muslims; putting non-BJP ruled states under constant camera glare; a muscular state; and endless air time and no journalistic scrutiny for Modi, Arun Jaitley and Amit Shah. And on all these issues, Chandrashekhar has an editor/anchor who is perfectly aligned.

MUCH before he became the prime minister, Modi’s pet peeve has been the English language media based out of Delhi. He alleged that the national media deeply aligned with the Congress party and he derisively called them ‘news traders’ or ‘Lutyens journalists’. This is a critique Goswami shares with Modi. As he recently told an audience in Bangalore in the course of promoting Republic, ‘You and me together will save Indian journalism from the influence of Lutyens’ Delhi’.

But Lutyens today means Modi, and Goswami also shares his ‘vision’ of media as an expression of national identity and even global self-assertion. On October 25, 2016, less than a week before he resigned as the editor-in-chief of Times Now, Arnab Goswami announced at a CII event in Delhi, “In the next three to four years we are going to launch a big challenge to global media… I don’t find BBC or CNN to be the sacred cows of journalism. I don’t believe we have anything to learn from them.” Barely a week later, Modi virtually echoed Goswami while speaking at the Ramnath Goenka awards for excellence in journalism: “We should have an Indian (media institution) of world class quality because we are a major player in the world. Our concerns should get reflected effectively in the world.”

BOMBAST and cobbling together a right-wing network under a BJP-led dispensation may be easy to do. The tougher part is to survive in the English language news market where viewership at all times is under one per cent of total TV viewership. The dependence on advertisements as opposed to subscription revenue continues to be high; only around 10-15 per cent of the estimated `20,000 crore cable subscription revenues reach broadcasters, according to an estimate in 2015. In addition, getting a frequency on cable/DTH networks costs roughly `18-21 crore annually, and this is not counting the carriage fees that broadcasters pay for prime cable/DTH band. Media pioneers like Raghav Bahl of TV 18 were priced out by Mukesh Ambani in the wake of the financial meltdown that sent ad-spends crashing.

Deep pockets and the wherewithal to survive initial losses for several years as was the case with Goswami’s previous employers, Times Now, is critical if Republic has to compete in an already overcrowded English language television market.

Goswami’s Republic indicates the mainstreaming of right-wing opinion as a business enterprise. Already, Swarajya and Open magazine – along with sundry portals like OpIndia and PGurus (not to speak of social media trolls) – are trying to carve a space for right-wing opinion-makers in the public sphere. Goswami at the head of a well-funded television network will undoubtedly lead the pack. In the United States, this has already happened and across media platforms – television, print, radio and digital. Fox News, like the Arnab-led Times Now earlier in India, leads CNN in ratings and has done so for a very long time.

A right-wing bias may be good business for Republic and, increasingly, for others in the media too, but what’s good for business may not be best for the actual republic.

Around the time Arnab was promoting Republic in sundry metros, a two judge bench of the Supreme Court earlier this month ruled out ordering regulation of media content. The bench also appeared to endorse self-regulation, a stand that was favoured by both the government and the News Broadcaster Association (NBA).

Whatever private broadcasters may say in public, the news watching public, especially in English, is minuscule and every means, both fair and foul, is deployed to stay ahead in the race. When a political slant is thrown into the mix, the results can be quite toxic. Given the emerging ecosystem, there is an urgent need for the Indian media to come up with effective self-regulation. The arrival of Arnab’s new avatar, which seems all set to be as potent as the old one, provides us with a peg to at least begin debating the issue anew.