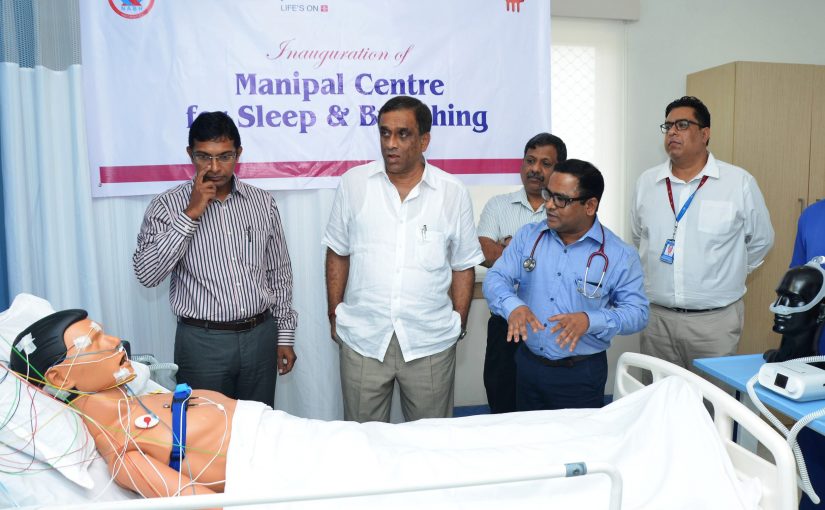 HOW SWEET IS YOUR SLEEP? Sleep disorders are many in our stress-filled times and you may want to do a polysomnogram at the new first-of-its–kind Sleep & Breathing Centre at Manipal Hospital! Sleep quality defines what we suffer from, be it morbid conditions like COPD, asthma, heart failure and more. Pic shows inauguration of the Sleep Centre by Minister for Transport Ramkrishna Sudin Dhavalikar, with him are consulting pulmonologist Dr Prabhu Prasad, oncologist Dr Shekhar Salkar, unit head Girish Babu Bommakanti and others

NOTED scientists from NIO, Dr Antonio Mascarenhas (former GCZMA and environmentalist), and Dr Baban Ingole, have revealed that the work of building  a bridge at the crossing at Campal which has been demolished is in violation of the CRZ rules and the nearby area in St Inez is widely infested with mosquito larvae. This is a severe health hazard for the residents in the vicinity and Panaji.

Before commencing the work, the concerned authorities should have treated the surface of the St Inez Creek and removed all the floating debris — plastic water bottles, plastic bags, etc — strewn in the creek. Even workmen involved in the project work are subject to the health hazards of dengue, malaria and other water borne diseases. The work was undertaken without care and regard during the peak of the summer heat. It is a very unprofessional attitude on the part of government institutions and shows lack of diligence.

For years the concerned authorities have neglected and deliberately sidelined the maintenance of the creek and failed to stop encroachments or stop residents from turning it into a garbage gutter. It would not be wrong to say that the people of Panaji can sue the government for endangering their lives as possible victims of dengue and malaria and other mosquito-borne diseases which take a toll on life.

OUR colonial time engineers knew the value of open gutters running along the grain of the land to drain monsoon rain and even in their engineering road works they knew the importance of drainage gutters on either  side of the road/street….roads were built in such a way that they were raised at the center and sloped very gently to the gutters and pavements alongside. There were proper kerb sides and pavements for pedestrians and not hawkers to set up shop, or for ambitious citizens to encroach on to make their garden grounds larger.

Also, if you see any of the colonial time towns of South East Asia, you will notice that gutters were never covered up with gigantic slabs of concrete or iron like they are doing in Panjim! Gutters are always meant to be open and for water to drain away, PWD and health authorities made sure nobody dared to throw their litter and garbage in gutters. The penalties were heavy for covering up a gutter for private convenience. The law made it clear that nobody poor or rich could seal a gutter in front of their homes, and if anyone wanted to do anything to access entries and exits they had to do it with all due respect to the continuing existence of the gutter system.

Well-maintained gutters are a boon to any civilized living in tropical towns or even cities. Of course, if the rain stops falling altogether, we won’t need gutters at all, unless the government takes to washing streets with water tankers and hosepipes. Unfortunately, post-Liberation in Goa, all respect for the values of old have flown with the wind and that is why we are suffering and paying the price.

Our governments, civic corporations and other associated corporations who live off the fat of the public exchequer, waste and squander funds without the application of primary common sense. No town/city like Panjim is going to be ‘smart’ without restoring and maintaining a good gutter system for drainage, good roads with zebra crossings, gentle speed breakers (not the hillocks we have to break someone’s spine) and decent pavements/footpaths for those who have to, or prefer to, walk for various reasons — not least of all because the doctor’s ordered it!

IT IS strongly recommended that Chief Minister Manohar Parrikar along with his entire cabinet, and possibly accompanied by Laxmikant Parsekar, should watch Francis de Tuem’s latest spectacular tiatr “Savdhaan Goa.”

It’s a three-hour, extremely vivid narration of the very sordid political jugglery that Goa has witnessed with deep anguish over the last two months. The people of Goa will never forget nor forgive Manohar Parrikar and his very dubious band wagon of political bandits.

WHEN unlimited calls and data are available only in `350 then why are MLAs collecting `15,000 by way of  telephone allowance? Is anyone going to ask any questions to our newly arrived 550 members of Parliament… about their collection multiplied by `15,000! Are they here only to waste our tax money? Make this viral please!

THE Curchorem footbridge tragedy is not ‘sad’ as the chief minister says, but tragic and avoidable if our priorities are right — which they are not. It is not an accident, but negligence and dereliction of duty. Why was the foot bridge not dismantled? We spend more time in political games like preventing people eating their staple diet than in providing safety to citizens and toot ‘Acche din’! We are more hell bent on taking short cuts like converting internal roads to highways not caring for people, than tackling dilapidated life threatening foot bridges. Citizens’ rights are their last priority. Citizens’ valuables are regularly being stolen and the BJP feels that they deserve it if you go by their record.

MLAs rushed to change sides to become ministers — for what? They put up huge hoardings of themselves thinking they were superheroes! This is a humbling tragedy for them and they should all resign now.

Goa’s BJP has no debating skills. The chief minister was humbled by national media ‘n’ number of times. The local BJP are easily turned by karyasevaks from UP settled in Goa. They say that China is building several power plants and that India needs to keep pace; that coal needs to come to Goa to feed these power plants. That is why rivers need to be nationalised: to stop opposition. True, but why through Goa when Mangalore too has a port? MPT shelved the Betul port idea: why? Because the thermal power plant which was to be set up in Karwar, close to Goa’s border, had to shift after protests from local environmentalists. Just today the BJP is crying that all rivers in India are highly polluted: but they alone think nothing of polluting the so far clean rivers of Goa — excluding the Mandovi which is already polluted again thanks to BJP’s casinos — yes the new ones are owned by BJP members.

It is now or never: for the sake of the country it is imperative that Parrikar is defeated at the Panaji elections.