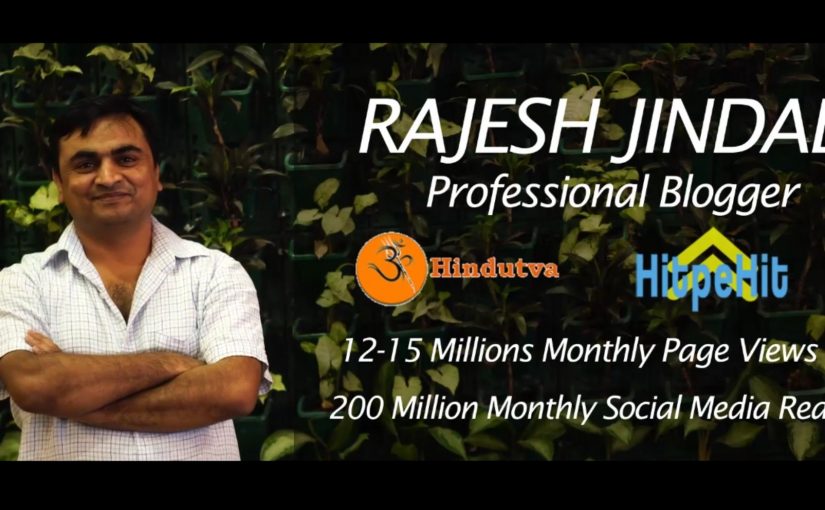 FAKE NEWS, REAL PROFITS: Rajesh Jindal seems to have found an easy source of income — publishing fake hyped up stories that cause unrest and get more page views. India is the loser as such elements get rich on breeding hatred and fostering enimity between communities that are often ready to believe the worst

HINDUTVA.info is the mother hen of all fake websites. The reach they have is phenomenal. At the time of writing, Hindutva.info’s traffic rankings according to Alexa is 1,229 in India. As compared to that, thewire.in has a ranking of 1,885 in India. Alexa, an Amazon.com subsidiary, is a commercial web traffic data and analytics company.

While there are other suspect websites like postcard.news which are more popular than Hindutva.info in terms of actual volume of traffic, I personally consider Hindutva.info the most dangerous because the content that they serve is in Hindi which reaches the masses in villages and small towns. As is often the case with such websites, the identity of who owns the website is hidden. Hindutva.info’s ‘About Us‘ page reveals nothing about who runs the website.

WHO IS BEHIND IT

AT ALT NEWS, we recently did a detailed investigation of DainikBharat.org which is yet another popular fake news site. In case of DainikBharat.org, the WHOIS information which can potentially reveal name, address, phone number etc of the domain owner was public when we investigated the site. It helped us find the initial clue which was their phone number. However, in case of Hindutva.info, the WHOIS information (https://www.whois.com/whois/hindutva.info) is also well hidden using a paid service called ‘Domains By Proxy‘. The name, address, phone number etc, is that of the company ‘Domains by Proxy’, and not Hindutva.info. The only thing we know is that the domain itself was registered on 18th August, 2015.

Typically, with such websites, in their initial days of existence, they tend to reveal much more personal information than they do once they become popular. A service called Wayback Machine helps us see what the websites looked like at various points of time in the past. They take regular, automated screenshots of almost all websites on the internet. We looked at a September 11, 2015, snapshot of Hindutva.info on Wayback Machine taken just a month after the registration of the domain name.

The ‘site:‘ operator used to find Jindal is a feature offered by Google Search. If you wish to search only a specific site, lets say hindutva.info, then you can add “site:hindutva.info” to your search query. However, if you wish to filter out all the results coming from one particular site then you preface the ‘site:‘ operator with a minus sign => ‘-site:‘. In the search query above, I wanted to filter out all the content from hindutva.info website as it is much more likely that I would find personally identifiable information of Mr Jindal on websites other than hindutva.info. Hence, the search operator ‘-site:hindutva.info‘ was employed.

There’s a Rajesh Jindal who claims to be the founder of Hindutva.info on Quora and LinkedIn. But, who is Rajesh Jindal? We turned yet again to Google. And…success! We now had Rajesh Jindal on video boasting about his success as a blogger and how he makes tons of money. The video was found on a website called Blogscreed which Mr Jindal co-foundered.

A Facebook event by Blogscreed stated that Rajesh Jindal makes more than 10 lakhs per month. What is the secret of his success? How did he make the business of fake news such a successful venture? To find that out, we needed some more personal information about Rajesh Jindal, like a phone number or an email address, so that we could run some more searches. Jindal’s Quora profile, mentioned another website which he foundered – hitpehit.com. We looked up the WHOIS information of hitepehit.com => https://www.whois.com/whois/hitpehit.com and found that unlike hindutva.info, the WHOIS information of hitpehit.com was not masked by a paid service.

Search results showed the ‘About’ sections of two Facebook pages namely JaiHindustanKiSena, with a following of 2.8 million and JanDHanYojnaModi. with a following of 4,60,000. It was clear that both pages were operated by Mr Rajesh Jindal. Both pages displayed Mr  Jindal’s email address as the contact email address. Additionally, the website on the ‘About Section’ was hindutva.info and both pages shared identical links, all of which were from Hindutva.info. These links were shared at the exact same time on both the pages showing that both pages were being handled by a single entity –.i.e. Mr Rajesh Jindal or his team.

All the Facebook pages we found together have a direct reach of about 4.5 to 5 million. Each one of them share links from only two websites that is “hindutva.info” and “hitpehit.com”, both of which are owned by Mr Rajesh Jindal. Each one of them has either “hindutva.info” or “hitepehit.com” as the website in the About section of the page. The central idea seems to be to pick certain famous individuals and make Facebook pages in their names.

The only exception is the last Facebook page “Mandir Mata Vaishno Devi Ji Fans”. Here, religious posts are interspersed with links from hindtuva.ifo and hitpehit.com. The page has a following of close to 400k. A clever use of how to use religion to forward one’s blogging career based on fake news.

We also found that Rajesh Jindal uses his Facebook account (https://www.facebook.com/Rajesh.Jindal007) to cross post across multiple Facebook groups that have huge membership. He himself is the founder of a group called “Rohit Sardana and Sudhir Chaudhary Fan Club” which has close to 600k Members.

This whole social media infrastructure that he’s created is used to drive huge amounts of traffic to his websites. He’s monetised his website using advertisements from three companies namely Revcontent, MGID and Google Adsense. At the top, middle and bottom of every post, you’ll find advertisements which help him mint money.