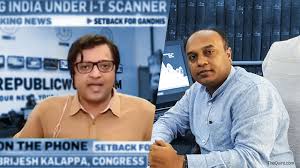 FRIENDS TURNED FOES: Arnab and Kalappa had a mutually respectful relationship until a telephonic interview being shown live went awry and ended in a vicious diatribe by Arnab

It was not just the viciousness of the attack being unleashed upon me, but also the person it was coming from, that astounded me…

WHEN I received that much-talked about phone call on Friday, 12 May, around lunch time, I initially told the person on the Republic TV assignment desk that since the Congress does not speak to the Republic, I would rather be excused. However, their assignment desk misled me by stating that other Congress leaders were also speaking to them. I, therefore, accepted the call.

What transpired over the next six-odd minutes is something that most people have now watched – usually in horror – as I was called a variety of names by Arnab: from novice to worm, from lapdog to lunatic, all the while being told to shut up repeatedly.

My initial shock would have been apparent even to those watching. It was not just the viciousness of the attack being unleashed upon me, but also the person it was coming from, that astounded me. In fact, as soon as Arnab came online all guns blazing, I realised his barbarous intent and ended my conversation by stating “you can speak in your authoritarian voice to anybody else you like, but not me” and hung up. Arnab carried on his diatribe to a dead phone line for a full three minutes thereafter.

THE first time I met Arnab was in 2004, when he was a reporter-anchor with NDTV.  He was shooting a feature on Kapil Sibal, who was contesting elections from Chandni Chowk. I happened to be around as I was Sibal’s junior colleague at the time. We spent a whole day together, Arnab and I, eating, chatting and taking in the sights and sounds of Chandni Chowk. Back in 2004, I saw Arnab as a friendly, amiable and decent human being.

I met him on several occasions thereafter, more so after I was appointed media panellist for the Congress in 2013. Our interactions were always rather warm and I’ve always had positive feelings for him, irrespective of his open political stance over the recent years. I wished him all the best for his new venture, Republic TV, and I meant every word of it. This is what I wrote: “Arnab, my heartfelt best wishes are with you in all you do. Unfortunately, I am an atheist, I would have otherwise prayed for your success and well being. Do drop me a line if you’re either in Bengaluru or New Delhi sometime.

THEREFORE, when he began his now-infamous telephonic call with “Shut up and listen to me Brijesh Kalappa,” I was more than surprised. It was not the first time I had called him out for his political leanings.

On one occasion, I spoke openly of his visceral hatred for the Congress and mentioned the fact that his father had contested and lost an election in 1998 on a BJP ticket.

Why did a person who remained unruffled despite hearing such things earlier, suddenly come down upon me like a ton of bricks? That too, for stating the obvious. All the major funders of Republic TV, including Rajeev Chandrasekhar and Mohandas Pai, are people who publicly speak out for the BJP and lash out at the Congress. Rajeev Chandrasekhar’s affiliation to the BJP is well known. Their partisanship has never been in question. But a fact is a fact; if the stakeholders of the channel are BJP affiliates and supporters then it is only natural that fingers will be pointed.

ARNAB comes from a middle-class family and he wears that as a badge of honour, as he should. His father was an army officer. Rajeev Chandrasekhar’s background is also similar and Mohandas Pai also belongs to a humble family. All three are investors in the Republic TV channel.

A BJP leader once told me, “The reason you have extraordinary support pouring in from all sections of society, including BJP/RSS supporters, is because even the right-wing knows Arnab to be an opportunist, who can switch sides for personal profit. But the main reason why people support anyone is because he represents humility and Arnab represents arrogance. As for Chandrasekhar, he is clearly eyeing the Thiruvananthapuram parliamentary seat and is thus after Shashi Tharoor.”

It is the arrogance that is so stark and sticks out like a sore thumb.

As is bound to happen when one has a clear conscience, my response was simple and straightforward: “Arnab, please go ahead and expose me in public. Don’t miss this golden opportunity to expose me completely.”

Doesn’t common sense tell Arnab that a person does not give up a ministerial position to return to legal practice, unless he needs to earn a living?

If I was into underhand dealings and had amassed money to enrich myself, would I have given up the position of legal advisor (with the rank of minister) to the state of Karnataka? I resigned from that post in January 2017 to represent Karnataka in the Cauvery river water dispute.

My record is absolutely clean. I have nothing to fear. I only wish to tell my former friend that the mighty Roman empire crumbled just a few years after a poor carpenter was nailed to the cross on trumped-up charges of blasphemy. Nearer home, the powerful Pandyan empire of Madurai was destroyed by Kannagi’s curse for losing her husband to a false charge of theft.

History is replete with instances where the mighty are trounced by the virtuous. Humility will always trounce arrogance.

THE verbal duel between Arnab and Brijesh Kalappa became sensational following the posting of the video on You Tube under the misleading banner, “Arnab’s befitting reply to Cong leader Brijesh Kalappa who was misbehaving with female anchor!”

It all started with Republic TV’s Sheetal Rajput (yes, she has a name, and it isn’t “female anchor”) trying to get a quote from Kalappa over Delhi High Court directions on Young India issue. A couple seconds in, Kalappa refers to Republic as a “BJP channel” (BJP MP Rajeev Chandrashekar, the vice-chairman of the BJP-led NDA-coalition in Kerala, has invested $4.7 million in the channel), causing Rajput to heatedly demand an apology. Kalappa then goes on to say that he does not know whether she is a member of the RSS or BJP and refers to her aggressive tone. That was the extent of the misbehaviour. At this point, Goswami swaggered onto the screen, demanded that Rajput hand over the mic, and started yelling at Kalappa.