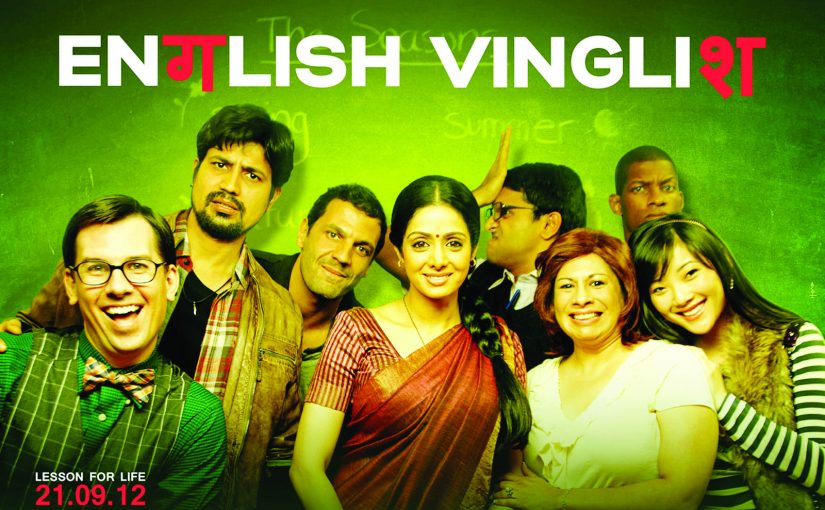 CONFUSING: For those who do not know the English language it can be very confusing as dramatised by the film ‘English Vinglish’

English is a nightmare not only for many Goans students but for rural students everywhere in the country. The worst affected is Punjab where over 75 per cent of the students fail because they do not know English

HASSAN’S Attendance Problem by Sudha Murthy, The Echoing Green by William Blake, a letter to the editor of a newspaper, The Gold Frame by R K Laxman. Preeti Sharma doesn’t miss much of what happens in class. In her notebook, in a neat, error-free handwriting, she has scribbled down carefully all the

chapters she has studied, with notes on them. Her mother Baljinder calls it “the most beautiful handwriting in the family”. Only, Preeti, 17, a student of Government High School of Jassowal Kular village in Ludhiana, cannot read or explain what she has written. She just took down what her teacher wrote on the blackboard, she says.

Preeti is among the 77,021 Class 12 students of the Punjab School Education Board (PSEB) who failed

With the PSEB doing away with grace marks this year, the failure rates have shot up in the state. In Class 10 too, more than 70,000 students failed English, with Maths the only other subject with higher failures.

marks are for internal assessment, added only if this exam is cleared). Baljinder says they are shocked. “She writes beautifully. She has never failed before in any subject. This time too, we were expecting at least 40 marks in English. I had even arranged an English tutor for her for the past seven months, paying `500 a month. Now I have got her a new one for the re-test,” says the 35-year-old.

“Educating four granddaughters, with no grandson, is not an easy task,” sighs her grandmother Kamlesh Rani. “My son is a small dairy worker. Still we never refused tuition to improve Preeti’s English. For us `500 per month is not a small thing. We never asked Preeti to do even chores at home,” she says.

Father Jatinder Pal, 37, says he is “no more interested” in seeing Preeti graduate. “If she fails to clear the English compartment exam too, we may enrol her in some computer course before thinking of her marriage,” he says. However, Baljinder, who studied up to Class 10, also wonders if it is all Preeti’s fault, adding she is afraid what the teenager might do if they come down too hard. “In Class 12, my daughter cannot speak a word of English and has no confidence to converse with anyone in the language. Whom should I blame? Was it our fault to send her to a government school? We cannot afford private school fees given that we have four daughters.”

Baljinder can already see what lies ahead for her younger daughter Charanjot, a Class 3 student. Charanjot can’t write basic ‘A, B, C’ as yet, she says, even as her books have reached the stage of words and sentence formation. She shows Charanjot’s English book, where her daughter has noted down Punjabi translations against each word.

“She goes to school just for fun,” Baljinder bursts out. “There is no one who is failing her or scolding her for not studying. Without the Punjabi translation, she does not understand any English word. I have already hired a tutor for her for `200 a month.”

Preeti, sitting nearby, gives a faint smile as Baljinder talks about Charanjot. “Pehlan kadi kisi subject vich fail nahin hoi. Ai nai socheya si kadi (I have never failed earlier. I never imagined this),” Preeti says. However, she admits, it was coming. “English aukhi lagdi hai (I find English difficult). Somehow I scored 53/75 in Class 10, but in Class 12, it just got too tough. I have found it difficult since Class 1. There is no one in our village or school who would speak to me in English or encourage me to do so. Teachers in school never speak in English.”

The only people Preeti knows who speak the language are those “in private schools”. “They have a different aura. They speak differently. I cannot explain how, but they do.”

Taking out her notebook again, the 17-year-old turns to the letter to the editor she has written. “I mugged up whatever the teacher said but I do not know who an editor is or what the word means,” she says. “It feels odd even when madam says ‘Pin Drop Silence’. Once I even wrote ‘Pin Drop Silence’ in the notebook thinking it’s something related to notes.”

A team from the District Education Office has been to the school to question Kaur about the poor English results and Headmistress Manjit Kaur about the overall high failure in classes 10 and 12. Kaur earlier worked at a private institute as an English teacher and has been at this school since 2005. She is the only English lecturer for classes 11 and 12 at the school and earns `8,000 a month, her salary on the lower side as she is a “panchayat appointee”.

“What do you expect if you have to teach basic nouns and verbs to Class 12 students before starting the actual syllabus?” she says. “Some students cannot even spell words like ‘thankfully’, ‘obediently’. If I say ‘ugly’, they correct me and say its ‘yugly’ (with the sound ‘you’). If I say ‘receipt’, they can’t understand why ‘p’ is silent. What can you do if the basics of a student are so weak?” she says, blaming the no-detention policy till Class 8 for this.

Her seven Class 12 students who cleared English scored only between 20 and 40 marks out of 75. Says another teacher, “If you ask students to pick a verb from the sentence ‘I saw a tractor’, they say tractor. If things like the difference between a verb and noun have to be taught in Class 12, it is unfair to blame teachers alone for the poor results.” Headmistress Manjit Kaur says she can’t explain the massive failures. “Our teachers had put in everything, that is all I can say.”

In 2015, the then education minister in the Akali Dal-BJP government, Daljeet Singh Cheema, had decided to himself take a ‘class’ of English teachers after more than 80,000 students failed the subject in Class 10, inviting the media to attend. Only one among the more than 200 teachers present was able to speak in English with Cheema. Among the words the teachers failed to spell were vacant (vacent), should (shuld), lake (lack) and eight (eaght). Asked to explain why their results were poor, a teacher from Fatehgarh Sahib wrote, “It class was very weak class from 6 by chance (He meant to say he had got very poor students).” Others blamed it on schools being located in villages, students getting nervous while writing, and even that they had forgotten their spectacles at home.

After this, the government held training classes for English teachers with experts from the British Council. In 2016, the number of students failing in Class 10 English fell dramatically to 56,628, later revealed to be the result of 26-30 grace marks being awarded, especially in English and Mathematics. Cheema again held a ‘class’ with English teachers, this time with more than 500 attending, but saw no better results.

Preeti, in fact, is among the luckier students, to have had a dedicated English teacher. It was in 1999-2000 that the then Akali Dal government introduced English from Class 1 in the state. Earlier, English as a subject was taught from Class 6 in government schools. In almost all the government primary schools, a single teacher teaches all the subjects and often handles more than one class.

Even after introducing English, Punjab never treated the subject as a specialised one, and Social Science teachers still continue to be assigned to teach the language in schools with no English teacher. Teachers of Punjabi, General Science and even Physical Education sometimes pitch in. The first time that posts for specialised English teachers in the ‘master cadre’ (classes 6 to 10) were advertised was in 2007, with the qualification specified as graduate with B.A elective and English as teaching subject in B.Ed. But of the thousand posts that were advertised, only 800 were filled. The state government is yet to frame even a policy and service rules for recruitment and promotion of English teachers, unlike in all other subjects.

Apart from board exams, most students in Punjab feel the pain of English acutely when they seek to immigrate to countries such as the United Kingdom and Canada, which require them to clear the IELTS (International English Language Testing System) first.

This also means many run up prohibitive amounts seeking to immigrate. Each attempt to clear IELTS costs `11,800, and many end up spending up to `70,000-80,000 in several bids

Punjab Education Minister Aruna Chaudhary is convinced the setback is temporary. Talking about the end of the grace mark practice, she says, “I am the one who ended this. Why should we keep a child in illusion about his/her performance? For English, a series of meetings are being held with Chief Minister Amarinder Singh, and he is very keen on introducing special teachers for English right from Class 1. We are also planning to introduce spoken English from Class 1. Also, nursery classes will be started in government schools.”

Meanwhile, it is already too late for Vikesh, 18, the son of a vegetable vendor and domestic help. He failed not only in English but also Political Science and History in Class 12. Sister Rabita Kumari, who helps out her mother Sunita Kumari at the houses she works in, only failed English in Class 12, and their parents have decided to take a chance on her but take him out of school. The re-exam fee for one subject alone, that they have to raise for Rabita, is `1,350.

Rabita, who barely passed English in Class 10 with 23 out of 75 marks, and scored 18 out of 65 in 12th, says she “cried a lot” after the results. “I thought of committing suicide, but it would have hurt them more.” After a pause, she adds, “I scored 56 marks in History, which means I am not completely stupid. I can study.”