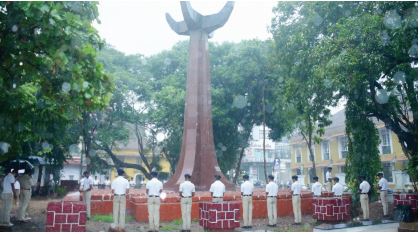 ANOTHER GOA REVOLUTION DAY!: Goa Police armed contingent along with Police Band rehearsing at Azad Maidan Martyrs Memorial on the eve of Goa Revolution Day which falls on Sunday, June 18, 2017. The government has been observing this day from 1980 onwards in memory of Goa’s freedom struggle against colonial Portuguese rule; the movement gathered strength after a call by Dr Ram Manohar Lohia as every Goan remembers today

COME June 14, the crafty and wily Vijai Sardesai was  reportedly not going to hold his annual birthday bash. Instead he planned to go a pilgrimage to Shirdi. But the now badly-battered and bruised Vijai Sardesai should  realize that no God will ever forgive his treacherous and very unholy act in having, for lust of power and money,  embraced the BJP which he had himself dubbed as being communal, corrupt and casteist.

For their very deceitful act of cheating the people of Goa Vijay Sardesai, Vinod Paliencar, Jayesh Salgaonkar and Rohan Khaunte will never be pardoned. They have committed political adultery and chicanery of the highest order!

I READ that money is drawn from the Centre for the Smart City of Panjim. May I request Siddharth Kuncalienker to kindly give us a break-down of where this money will be spent? I suggest this amount and State funds must be utilised for cleaning up gutters, setting up a garbage-treatment plant and cleaning the St Inez Creek, to ensure that Panjim is in a position to become smart.

The Miramar – Dona Paulo road was flooded during the pre-monsoon showers. People made a hue and cry but it must have fallen on deaf ears. This week once again the road is flooded.

I repeat — please see that Panjim is ready for a gigantic plan for smart city. The government will have to answer to the public for wastage of funds if not. And please stop Panjim from flooding first if you can otherwise you’ll have to market Panjim as an underwater city!

PANJIM has never been so badly off in past monsoons. It is still a green town of gardens and therefore there is lots of green waste, and people pile up their swept up green garbage everywhere. These days because of the rain they can’t burn the green garbage. Green garbage is not dangerous and will return to earth no matter where you put it, but if one piles up some leaves somewhere, there are many who add on their plastic bags full of garbage there — and the moment it becomes mixed garbage CCP workers refuse to lift the garbage.

Also, new so called gutters are built by various do-gooders here and there and with such remarkable lack of common sense, that instead of water draining away they become gutters for garbage dumping! Soon both rain water and garbage go helter skelter, forming fresh water pools on uneven roads – perfect paradise pockets for dengue mosquitoes to breed.

Until we understand the importance of an open gutter system built along the grain of the land, and they are kept free from garbage, Panjim will continue to flood over everywhere with rotting filth and water. Wish the Portuguese government would come back to take care of Panjim’s gutter system and St Inez Creek! Can we do an arrangement with the Portuguese government seeing how they’ve got a prime minister of Goan origin now?

I don’t think Panjim can ever be smart without the restoration of the old open gutter system and the St Inez Creek, with all encroachment on its banks removed.

POLITICIANS divide us, terrorists unite us. Everyone is in a hurry but no one reaches in time. Priyanka Chopra earned more money playing Mary Kom then Mary Kom earned in her entire career. It’s dangerous to talk to strangers but it’s perfectly ok to marry one. Most people who fight over Gita and Quran have probably never read any of them. We rather spend more on our daughter’s wedding than on her education. The shoes we wear are sold in air-conditioned showrooms, the vegetables we eat are sold on the footpath.

And some more ironies: Most of the boys who are  ignored by girls in young life are actually the nicest and better husband material! We live in a country where seeing a policeman makes us nervous rather than feeling safe. In an IAS exam a person writes a brilliant 1,500 words essay about how dowry is a social evil, impresses everyone and cracks the exam. One year later the same person demands a dowry of 1 crore because he is an IAS officer!

And the best irony of them all:  we are living in a world where we consume artificial  lemon flavoured drinks and use real lemons in finger-bowls!

THE open letter of 65 former bureaucrats that included Julio Ribeiro seems to have jolted us from our ‘ache din’ brain-washed slumber. Panjim needs to take heed and not go to sleep again. The letter by itself will not change matters unless right-thinking citizens carry it forward.

The Panjim bye election is a good platform to convey the essence of the letter to the Centre and revert to Democracy. The election is not just about Panjim and Goa: voters must send a strong message that democracy is being slowly but surely chipped away and that they will not stand for it.

A major stumbling block will be the cash for votes. In 2016 the CEC made recommendations to the Centre to make the sale of votes a cognisable offence: why are they not following up on the same? Simple: the Govt. is supressing all democratic rights.

This does not absolve the CEC. In the recent assembly elections, the former Defence Minister alluded to the same cash for votes — and did not get clipped by the CEC — meaning there is a significant number of votes going for cash. Did the CEC care to monitor/observe the recent Panchayat elections to keep in touch with reality? The report of an assault on a family for ’not voting for their candidate’ suggests cash for votes. There will be only one or two bye elections on the same day: the CEC has no excuse to not monitor and quell any such attempts.

All the ‘pink booth’ gimmicks and bar closing measures cannot fool the people into believing they are working so that — as their slogan says — the people can vote for the Govt. they want. This did not happen in the just concluded election in Goa. It is sad that Citizens are quite comfortable with the same. The CEC is today another pillar of Democracy: they have to be strong and uphold the trust democratic citizens hold in them