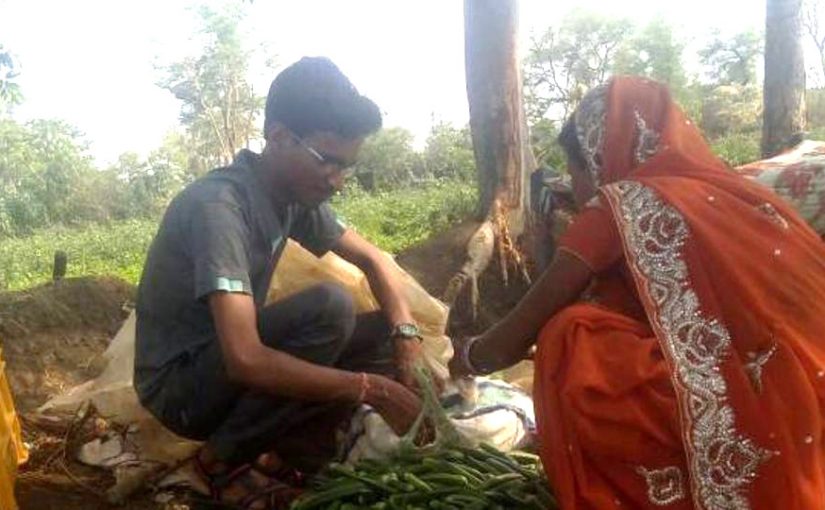 TOPPER: Dhavendra Kumar scored 98.6 per cent in his XII board exams but had to return to selling vegetables on the roadside as he could not see a way forward because of lack of financial support. However the widespread publicity he received brought him aid from both well-wishers and the government.

Increasingly elite institutions like the Indian Institute of Technology and the all India Institute of Medical sciences will see the entry of children from under-privileged backgrounds, including the sons and daughters of landless farmers and even small shop keepers, bringing social equality one step closer. Here are some inspiring stories of X and XII standard students who are making their mark despite incredible obstacles

RESULTS of Classes X and XII across all boards were declared recently. While many reports carried statistics of how many students were successful and how many faltered, how state governments were awarding the toppers, what the toppers aimed to do in their lives, some reports talked about the sheer resilience and perseverance of a few youngsters.

Stories of students overcoming hurdles — economic, emotional or physical — to ace the board exams are still surfacing. If you are looking for a little inspiration, here are some stories:

Dhrashti Dhruv has been struggling with cerebral palsy since her birth and is unable to hold a pen or write straight. That never became a deterrent for her, mentions a report in the Hindustan Times. She would record her lessons and would listen to them later on. Dhruv was confident that she would score above 80 per cent but confesses that 88 per cent was more than she expected. She scored 98 in Math and 90 in Social Science.

Tushar Rishi was detected with cancer in his left knee in 2014 and is required to visit AIIMS in New Delhi every three months. Even in this condition, he scored 100 out of 100 marks in Fine Arts, 95 in English and Physics, and 93 in Mathematics, according to a report in the Hindustan Times. Rishi is also an author. His book titled The Patient Patient, talks about his struggle with cancer.

Amit Kumar, whose father is a labourer in Bharatpur, could not pay his school fees and considered dropping out. The director of a private school came to his aid, funded his education, and also put him up in a hostel for free, mentions a report in the Hindustan Times. Kumar did not let any of the efforts go in vain and scored 100 in Chemistry and Mathematics and 97 in Physics. Kumar aspires to be an IAS officer.

After his father’s death, Nitish Kumar Mahato’s had to face a lot of hardship as a child. To help his family financially, Mahato worked as a security guard and watched over a residential apartment in Ranchi, the Hindustan Times reported. He would attend classes during the day and would keep his books with him at night, studying during his duty. Mahato, who scored 87.60 per cent in the state Class X exams, is now being helped by some residents of the apartment, the All Jharkhand Students Union party, a couple of NGOs and even a surgeon living in the UK, another report mentions.

Nurul Hoque Ali’s father is a truck driver and is mostly on the road, transporting goods. His youngest son, Nurul, who studies in a government school, scored 98 per cent to become the second-place holder in the state exams. Nurul, who scored 588 marks out of a grand total of 600, missed out the top spot by one mark, a report in the Hindustan Times said.

Supriya has been battling with blood cancer for the past three years. A report in Outlook mentions that her parents have used up all their savings in her treatment. Although her parents had dreamed of seeing her as a topper, Supriya did not let her disease stop her from scoring 81 per cent.

Meenakshi Sharma’s father was a rickshaw puller who passed away because he could not afford treatment for an illness. It left the family financially crippled and Meenakshi had to use her home’s walls and doors where she would write with stones. She would also go and study under street lights as they could not afford electricity. However, having secured 90.8 per cent, Meenakshi hopes to eventually become a Chemistry professor, mentions a report in Outlook.

Dhavendra Kumar sells vegetables with his mother at a local market in Chattisgarh. Kumar had scored 90 per cent in his Class X boards, and maintained his winning streak. With a score of 98.6 per cent, Kumar is the state’s topper. Kumar’s father is a meagre wage-earner and his brother was forced to discontinue his studies due to financial hurdles.

(Editors Note: Dhavendra Kumar could not afford the fees of a coaching centre in Kota (to pursue his dream of getting into an IIT) and also did not get admission in BITS Pilani as he could not afford the fees.  However after his story became public people from across the world wrote in to offer help and the Chhattisgarh government offered to fund his coaching and education.)