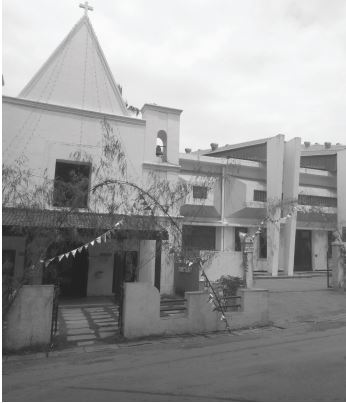 CARANZALEM CHURCH: The Our Lady of the Rosary Church at Caranzalem is at the heart of the storm ever since the treasurer brought several irregularities to light

The foot soldiers of the Church a n y w h e r e in the world including Goa are the parish priests who are in charge of individuals churches. Priests are appointed to look after various churches depending on their seniority and the number of parishioners attached to the church. The money for the maintenance of the church and for the charitable works undertaken is contributed by the people attached to the parish. Just as there are collection boxes in temples and mosques, there are similar collection boxes in churches. During the mass in a church various volunteers come with a box or cloth bag in which devotees can make their contribution. The church has systems in place to ensure that the parish priest does not steal the money that the faithful contribute for the welfare of the church. The parish priest is assisted and is accountable to a committee of ordinary lay Christians which is called the Fabrica in Goa.

There have been allegations that the parish priest of the church of Our Lady of Rosary at Caranzalem Goa has been cheating and putting the collections into his own pocket. Worse still it is alleged that he has been issuing self cheques to himself from the bank account of the Caranzalem church. The parish priest Fr Rosario Oliveira is alleged to have even opened a separate bank account in the Corporation Bank in his private name into which he has been depositing funds collected in the name of the church.

These charges have been made not by the Hindutva fanatic or an enemy of the priest but by the treasurer of the Fabrica of Taleigao, which is in charge of the Caranzalem church. In a letter addressed to Rev Fr Filip Neri Ferrao, Archbishop of Goa, the treasurer, Mrs Lydwin Sequeira, has alleged that Fr Oliveira has been opening the donation boxes from the church without taking into confidence the treasurer. The result is that the amount of money actually donated is not accounted for as there is no witness to the parish priest opening the collection boxes. It is the money from the collection boxes which are the main revenue of the particular church concerned.

The treasurer, Mrs Sequeira, has also alleged that she was forced to sign blank cheques on the claim by the parish priest that they were for the charitable work of the church. The treasurer, who like other Catholics is taught to believe that the priest is the representative of Jesus Christ who must be obeyed, countersigned the cheques in blind faith. All the cheques have to be signed both by the parish priest and the treasurer.

According to the treasurer, she was forced to sign a resolution to open a parallel account in Corporation Bank, Caranzalem branch, with Fr Rosario Oliveira being the sole signatory. The treasurer alleges that funds collected from the sale of souvenirs brought out for Christmas and advertisements appearing on them were diverted into his personal account. The treasurer has also alleged that receipt for donations to the church are being issued on the receipt book  of Our Lady of the Rosary instead of the Fabrica account.

According to the treasurer, the income from advertisements in the Christmas souvenirs, and the sale of family day coupons, for which a separate account was opened for the period between November 22, 2016 and February 8, 2017, was `7.83 lakhs. The treasurer has alleged that `4,61,000 of this income has been diverted into the personal account of the priest. The treasurer, Mrs Sequeira, has not received any reply from the Bishop’s office to her charges against the parish priest.

This is not an isolated example and there are many examples of parish priests pocketing the money collected in the name of the church. Many rogue parish priests start expanding or rebuilding the church when they are transferred to churches in the coastal belt which have lot of shippies and NRIs who contribute money generously. A lot of the development is linked to improving the living quarters of the parish priest. I have seen some of these living quarters which are more luxurious than that of politicians.

Many churches in urban areas and the coastal belt have been redeveloped without any consideration to their heritage value merely to enable the parish priest to make money. The unfortunate part is that the locals have blind faith in the parish priest. When on earlier occasions Goan Observer had written about large scale diversion of funds and cheating by a parish priest of Colva, two busloads of the supporters came to the Goan Observer office and threatened to beat up the staff and broke the computers and furniture. I was forced to call the police since the Secretary to the Bishop did not respond to our desperate calls.

The Bishop has no control over the parish priests as the chief shepherd of the flock himself has been selling the properties of the church. A large part of the land in Caranzalem and Taleigao, where Models Construction Pvt Ltd (Models) have put up several buildings, was donated to the church by Canon Souto Maior. These were sold to the builder by the Bishop’s palace. Indeed the church went to the extent of giving a power of attorney to Peter Vaz, the managing director of Models.

One of the reasons why the late Fr Bismarque was expelled from the church was his objection to the sale of the Vanxi island near Divar to a builder from Bangalore called Ozone to put up a 7-star hotel and beach resort. The land in the village included two chapels belong to the Santa Monica monastery which was used to train nuns during the Portuguese time. The monastery also is home to the Museum of Christian art from which very valuable art pieces were stolen some time ago.

Fr Bismarque had protested against the sale of Vanxi island to the builder from Bangalore. The is not the first property of Santa Monica to be sold by the Church to private parties. The CIBA plant at Corlim, which is now sold to a Indian company, was built on land owned by the convent and is still called the Santa Monica works of CIBA.

One thought on “JUDAS IN CARANZALEM!”