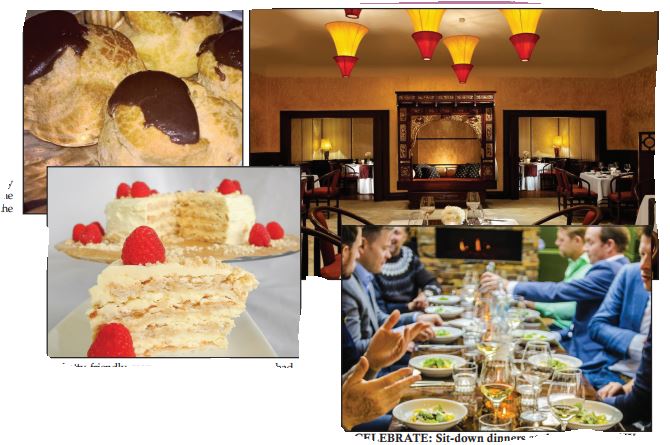 CELEBRATE: Sit-down dinners at the Marriott’s `Wan Hao’ can be fun! The famous crème eclairs/profiteroles of Ambora’s Jila Bakery (near Loutolim)…and the magnificent bol sans rival (cake without rivals) which few know how to make anymore!

LET’S say it was a rainy evening birthday dinner I attended and the invite said blah, blah…set dinner. Set dinner? What’s that? The friend explained that when you want to host a celebration meal comprising of close friends who keep in touch with you through ups and downs, then you invite them over for a set meal. It’s like you may take liberties with them with both informal and formal bonding!

That of course confused me  but then again I’ve seen members of families booking one of these alcoves attached to various 5-star properties for a celebration and it is tabled so that all sit for dinner and enjoy it served course by course (can be tiresome for the service boys but comfy for the diners). It’s very different from going à la carte or buffet style, and I must confess I’m quite charmed by the charms of a set dinner because here host and hostess sit down with their guests to enjoy the meal, instead of fluttering here and there to ensure everyone gets the desired attention.

Set dinners are easy to do if your guest list is about 10 to 20 friends. Women’s kitty groups do well with these set lunches/dinners and in this particular case my friend sold her husband the idea of a set dinner for his 70th birthday and before he could think she wrapped it all up. That’s how women are, never give husbands a chance to ask questions in entertainment matters!

Monsoon time Chinese set dinners tend to be more health conscious, seeing how the best of oriental cooking is light, lightly seasoned, spiced and flavourful, with natural fresh ingredients. Of course, Szechuan can be chili hot like some like it, but generally I like to think I can lose weight through the monsoon months eating Chinese! A weakness, I could eat Chinese every day, although badly cooked it comes over salted. Anyway, this is to say I attended this particular birthday Chinese set dinner at the Goa Marriott Resort’s Wan Hao restaurant which has a flair for doing these sit down affairs with menu selected and listed in advance.

FOR a while there the friend fretted about how a set dinner would work out in the Goan context — after all Goans like to eat late. What if the desired 7.30 pm turned to 10 pm…with various friends arriving late and then carrying on with the drinks…wouldn’t the set dinner get delayed with the rest in waiting mode? Putting the kitchen staff to some trouble? All her fears were put to rest because most of her friends turned up by 8.30 pm and the set dinner turned out to be quite a chatty, friendly, memorable affair with old friends catching up with each other’s life and times.

Scotch, feni and Portuguese wine flowed, and there was also a bottle of original Bailey’s Irish liqueur which I discovered has quite a fan following amongst women. Serve it neat or on crushed ice…soothingly and tantalizingly sweet with that je nais se quoi feeling of nostalgia if you’ve lived your life and it has fled by with its ups and downs or so to speak. The veggie/chicken dumplings or wontons were good, the basil chonak superlative, the corn soup (veg/chicken) too watery and too large in portion, I mean who wants to fill up on a soup and that too a nondescript one)?

But I relished the savoury crunchy raw papaya salad, asking for lemon wedges because a bit of fresh lemon squeeze always makes flavours more interesting….grumbled about plastic water bottles on the table destroying my view and got them removed! Really, I don’t know why 5-stars can’t be more discrete about placing a plethora of plastic water bottles like they’re some fine art work! Pouring water for guests is okay but keep the bottles out of sight! The second course had saucy mushrooms, chili chicken, stir-fried egg rice, ribbon noodles, with a selection of oriental condiments/soy sauce on the table to mix and match whatever one’s palate fancied.

The friend who had Marriott Club vouchers called in some favours and mercifully these were granted. My goodness, I fell of my chair to see that amongst the pile-up of birthday cakes — some courtesy friends — one included the hard-to-find heritage cake bol sans rival…“cake without rivals.” Few can make this divinely butter-laced Portuguese-time cake… originally made with almond crumble, but in Goa caju crumble is used if somebody from the old world makes it for you.

A perfect bol sans rival is hard to find but I learned that  Chef Santan of Pastelaria (Mandovi Hotel’s cake shop) makes it to order and the friend had ordered it. Although old-timer Clifford Rosario has long since retired, he taught Chef Santan how to make bol sans rival. And were those crème eclairs all the way from Jila Bakery out in Loutolim down south Goa? Someone confirmed they were, and of course they were a big hit with few guests paying any attention to the set menu’s date pancake with tender coconut ice-cream! Too bad, when it comes to desserts one may always be spoilt for choice.

Someone enlightened me that they are actually profiteroles, eclairs generally being long with creamy vanilla or chocolate custard/crème anglaise layered within…whatever, Jila Bakery eclairs/profiteroles are to die as well as live for, worth going all the way to Loutolim to pick them up (one most order in advance though). Well, this is to say I’ve fallen in love with the idea of a set meal in celebration of this, that or the other!

Small-time birthday celebrations are also more memorable to attend, we chatted, cracked jokes, listened to a few doctors’ memoirs, got high with joi de vivre, sang for the birthday boy…may he have many more and all that. Who was the birthday boy? That I won’t tell you for I’ve been warned strictly not to take his name in vain in this column! (Sigh) I no longer believe in sweating small stuff anyway, my dears. Some folk like to be written about, some don’t, and one must respect and accept all that in the business of journalism.

WHICH reminds me from my Mumbai days that I was once invited to this terribly upmarket crème de la crème  razzmatazz Gujju marriage. But the father of the bride was a good friend of mine and although he wanted me at the marriage he made me swear I would not write a word about it…and since I wanted to go, I swore a blue stream and nope, later never wrote anything about it, my lips are still sealed although it’s an old memory now. The marriage made even seasoned marriage goers’ eyes pop with the extravagant wealth on display…in real life sometimes what goes on behind and in between the scenes is far, far more interesting and instructive! Such things are better fictionalised in a novel (like the famous Shobha De does) and not wasted in foodie columns like this one!

SOMEONE called asking where to find the Mangalore bun I’d written about here. I think I’d mentioned Café Real in Panjim, check out the one at Café Tato, and the one at Café Bhosale is very good, in fact one may find it at many a common man’s eatery in town…good, bad, ugly. A good Mangalore bun would not be thick and lumpy, but a fairly slim golden disc of a bread with all oil drained and flavourful with cumin (even cardamom/pepper). Funny, I rarely get the taste of banana in it though banana is the original softener here — still, I prefer a freshly made Mangalore bun to horribly hard or leathery maida puri! No, you may not find a Mangalore bun in a 5-star buffet, okay.