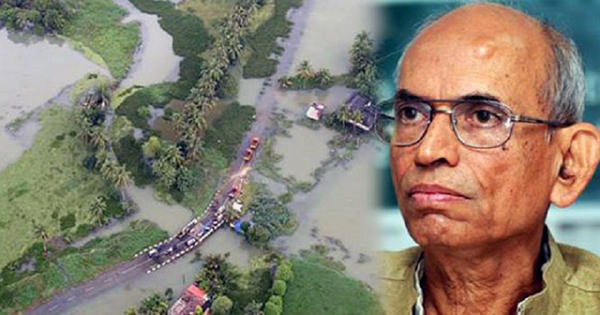 Noted ecologist Madhav Gadgil has warned Goa may face the same fate as flood-battered Kerala if it does not take precautions on the environmental front. Gadgil headed a committee that authored a widely debated study on the Western Ghats in 2011 and predicted the Kerala crisis

(Extracts from the WGEEP Report of 2011)

lthough the entire Western Ghats is to be declared as an Ecologically Sensitive Area, the entire area cannot be treated on the same scale either for development or for conservation. It is necessary to demarcate areas separately.

Since development and conservation have to go hand-in-hand, it was found prudent to follow a layered approach. The entire Western Ghats had to be divided based on the significance of the area. Three categories have been identified, namely

For the state of Goa, WGEEP recommends an indefinite moratorium on new environmental clearances for mining in ESZ 1 & 2, a phasing out of mining in ESZ 1 by 2016 and continuation of existing mining in ESZ 2 under strict regulation with an effective system of social audit. The moratorium on new clearances in ESZ 2 can be revisited as and when the situation improves and when a comprehensive study on the impact of mining on the ecology, environment, human health, and biodiversity by a competent multidisciplinary team, working along with people’s institutions, has been concluded.

Most of the mining in Goa is in the Western Ghats. The mining belt extends 65 km from southeast to northwest spanning some 700 sq km. Goa is the only state in India, as a result of a historical regulatory legacy, where iron ore mines are concentrated in lease areas of less than 100 hectares. There are a number of leases that have been dormant but are being reactivated given the rising demand for iron ore from China.

Most mining leases are located in and around Wildlife Sanctuaries (WLS) and forest areas. For eg., 31 leases are within 2 km of WLS, of which seven are working mines; 13 leases are within 1 km of WLS. Evidence of some mines operating illegally within WLS also exists. 2500 ha of forest area were lost to mining in the period between 1988–1997. (TERI, 1997) No studies to assess the loss in forest area in the Western Ghats have been done since then. Forests are practically nonexistent in some parts of the Bicholim taluka where mining has been in operation since the late 1940s. In parts of Sattari and Sanguem talukas, forests are affected in mining villages. Biodiversity loss associated with the land use and cover change resulting from mining operation in the region is very serious.

Loading jetties of barges are right on the river bank and these result in surface water pollution during loading and unloading operations. Sedimentation of river beds and estuaries (particularly the Mandovi-Zuari estuarine complex) and the resultant flooding of the rivers like Bicholim and Sanquelim have been attributed to this activity. Dumps are located close to water bodies which contributes to the silt runoff into the water especially during Goa’s heavy monsoons.

Opencast mining has induced significant changes in water quality and quantity besides causing topographical, morphological, and land use changes.

Mining activities involve the conjunctive production of groundwater as they require considerable pumping out of water. Many studies have highlighted the negative impact of Goa’s mining activities on local hydrology. As water tables drop due to the drainage of water into mining pits in zones of unconfined aquifers, local wells go dry and affect availability of water for domestic needs and agriculture and this impacts local lives.

Enormous amount of mining waste is piled up in steep and high dumps. Some of this overburden waste is being mined currently as it contains material of an iron content that has a market in China. Another important concern is how the mines will be backfilled once the ore is exhausted, if we export most of this excavated material out of the country.

There is massive movement of minerals by road as well as rail from Karnataka to Goa for the purpose of blending with local ore for its upgradation as well as export by miners through Mormugao Port Trust (MPT) and for five sponge iron plants located in Goa. An ongoing TERI study estimates that 39% of emission loads for PM10 in Goa are from the mining region and 25% from industry. It is observed that trucks have been using NH4A and transporting ore upto Usgao to access further shipment through barges to MPT. This has been creating enormous traffic problems as well as environmental hazards along its route due to ore spilling over the wayside by overloaded, and often uncovered, trucks. Many accidents are observed in the ore transport route. Studies have also estimated that exposure to air pollution (especially respirable suspended particulate matter) is high in the mining clusters and transport corridors in Goa, affecting the health of local communities.

Agriculture has also been severely affected in the area due to extraction of ground water, vast areas being covered by siltation and mining dust, thus destroying farms and livelihood. Agricultural fields at the foothills of dumps and mining areas have been severely impacted due to siltation from mining. This has led to serious conflicts between those involved in agriculture and mining in the area. A current case in point is Colomba village in Sanguem taluka, where 23 mining concessions granted during the Portuguese regime are located and which cover 75% of the village. A few of these mines have already commenced activities. In other words this agricultural village is under the shadow of being completely consumed by mines, leading to local agitation. Another village is that of Caurem. Kerkar (2010) in his paper to the WGEEP notes, ‘Very few villages in Goa are blessed with the ecological heritage of sacred groves, perennial springs and rich forests like that of Cavare of Quepem in south Goa. But today, (the) very existence of Cavare is threatened on account of increasing mining activities.‛ Agriculture and mining, people and mining companies, are pitted against each other. Current laws offer inadequate compensation for those whose land and livelihood is taken away by mining.

Many of these environmental and social impacts do not get reflected when one hears of the value that mining contributes to the gross state domestic product (GSDP). An exploratory study to value some of the impacts of mining in Goa using 1996/97 data, for example, suggested that even if this partial accounting of the environmental and social impacts is netted out of the value created by mining activity in terms of value added to GSDP, the ‘true income’ would be only 15% of reported income. More recent papers in response to the NCAER Report (2010) suggest that the benefit-cost ratios no longer favour mining in Goa.

The total failure to implement the community forest resources provisions of FRA in Goa has absolutely no justification. To take a specific case, the Devapon Dongar mine of Caurem village in Quepem taluka of Goa is located on a hill sacred to the Velips, a Scheduled Tribe group, and to sanction a mine on this hill against serious local opposition, and without completing the implementation of FRA is thoroughly inexcusable.

The Environmental Impact Assessment (EIA) process which is so central to protect the ecosystems in the Western Ghats was found to be defective at several points.

In the absence of any transparent, participatory monitoring process, the conditions imposed while according Environmental Clearance are often violated. The Environmental Clearance granted stipulates that if there are any water courses, they should not be disturbed and that dense natural vegetation be maintained for a distance of 50 mtrs on either side of the water courses. Field inspection revealed that these conditions were totally violated; that the streams are dammed, their flow diverted and stream bank vegetation destroyed. There is on-going serious social strife in this area due to this and other such violations of conditions. This state of affairs has led to enormous disaffection in the state regarding mining activity.

[a] No mining should be allowed in the Western Ghats in Goa in:

In regions of high sensitivity, ESZ1, as being demarcated by the WGEEP.

All Environmental Clearances for mines in these areas should have an additional conditionality requiring (i) 25% reduction in mining every year till 2016, when mining has to be stopped in ESZ1 (ii) environmental rehabilitation of the mined area post closure.

[b] In EZ2, current mining may be allowed but no new mining licenses should be granted until the conditions in the mining region improve.

[b] Introduce an iron ore content cut off for iron ore extraction that reflects environmental and social concerns.

[d] Mining leases in WL Sanctuaries to be permanently cancelled. While mines may be closed, the leases in Goa are still showing them as existing mines. Hence they must be terminated under section 4 of the MMDR Act. Any orders passed by the Collector and Revenue Officer excluding any of these mines from the Netravali Wildlife Sanctuary to be cancelled. This is also the recommendation of the Central Empowered Committee.

[e] Mining leases in the catchment area of dams used for drinking water to be terminated.

Sand mining to be audited; introduce sand mining holidays on stretches of rivers

Aggregate management should be considered separately from river management.

Separate legislations are required for the purpose

Examine and encourage alternatives to river sand for construction purposes

Necessary steps are to be taken to promote regeneration of natural riparian vegetation in areas hit by anthropogenic interferences along the river and tributary banks.

The developmental and infrastructural activities in the riparian areas should be carried out only after proper Environmental Impact Assessments by a competent authority.

For mining in Goa, cumulative EIAs must be made mandatory rather than entertaining EIAs for individual leases in the same areas.

Other recommendations regarding regulation of conjunctive productions of minerals and ground water, regeneration of agriculture, better practices in mining, etc are discussed in Part II of the WGEEP Report.