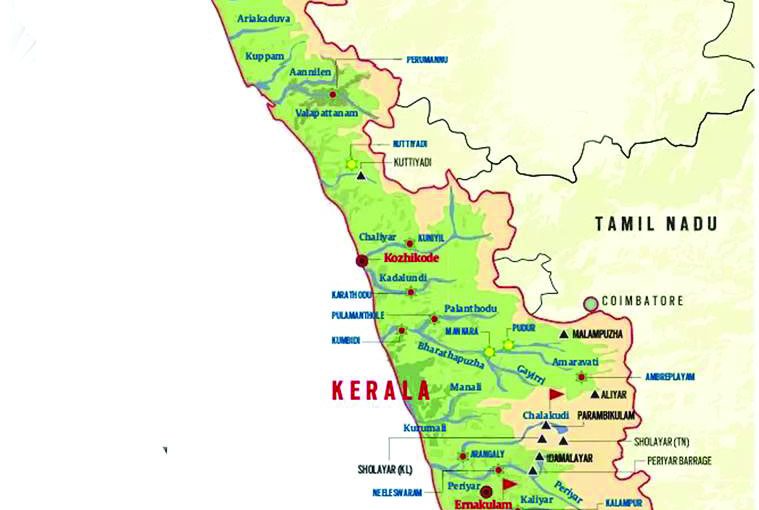 The map is taken from the River Basin Atlas of India, prepared by the Ministry of Water Resources, Government of India. The map shows the basins of west flowing rivers in the Western Ghats from Tadri to Kanyakumari

Veteran ecologist Madhav Gadgil had warned that massive deforestation and over-development in the ecologically fragile Western Ghats would be disasterous for coastal states like Kerala and Goa. Gadgil has warned that if there was a similar disaster in Goa the most vulnerable areas would be Miramar, Caranzalem and St Inez among others in Panjim

Rains, even heavy incessant rains, are hardly unusual in Kerala. The kind of flooding that the state is facing this year, however, certainly is. A few days of excessive rainfall, combined with some unwise reservoir management, lack of preparedness to deal with a situation like this and long-term demographic and land-use changes, have led to a crisis that is unprecedented in the last several decades.

The southwest monsoon this year has been exceptionally vigorous over Kerala, with nearly 65 days, out of the 78

days till August 17, recording above normal rainfall. On a few days in the second and third week of August, some places in the state received rainfall that was seven to nine times more than the normal for the day. Between August 13 and 16, many places in the state got about 15 days’ worth of rainfall in a span of 40-50 hours. On August 16, for example, the state received rainfall that was 915% of normal, making it one of the wettest days ever in recent decades. It was also one of the worst days when another 50 people were reported dead from various parts of the state, mostly due to landslides.

The situation has been particularly grim in Idukki, Ernakulam, Palakkad and Malappuram districts even as all 14 districts remained on red alert through the week. Rainfall has subsided a bit since August 17. Kerala had a 26% deficiency in rainfall in the opening of June. For the next ten weeks thereafter, till August 15, rains have been normal or above normal. Of these, five weeks reported excess rainfall ranging between 20% and 39% of normal. District-wise, Idukki topped the charts, with 80% more rains in the last three days, followed by Ernakulam at 47.52%.

Kerala has six large dams, two of which — Idamalayar and Idukki — have storage capacities in excess of a billion cubic metres of water. There are several smaller dams as well. At this time of the year, by the middle of August, these dams are filled to barely 50% of their capacities. This year, however, all the six large dams, and the smaller ones too, were filled almost to full capacity by the end of July. By August 2, Idamalayar dam was filled to 94% of its capacity while Idukki had 92% water. These are now almost 100% full.

Officials and experts now admit to some miscalculation here. Ideally, some amount of water should have been

progressively released from the reservoirs as the storage rose. Every dam has what is called a ‘rule curve’, which mandates the amount of water to be released when a certain level is reached. But dam operators in Kerala seem to have ignored that, possibly in their desire to keep the reservoir levels full even after the monsoon season. It used to happen in previous years as well. Only the water meant for irrigation canals and drinking used to flow out of the reservoirs and, as rains would subside, the water levels were never in danger of being breached. The gates of the Idukki dam, for example, had not been opened for the last 26 years.

This year, however, the water levels continued to rise in the reservoirs due to continuing rains, leaving the operators with no option but to open the sluice gates once the full capacity was reached. This led to massive amounts of water being released at a time when it was also raining heavily.

The situation was compounded further by the delay in releasing waters from the Mullaperiyar dam in Tamil Nadu. Here too, water was eventually released, causing further flooding in Idukki which is downstream.

Kerala is situated along the Western Ghats, with most of the towns and cities located on the foothills. Many new habitations have come up on the hill-slopes as well. The state has several small rivers, almost all of them flowing west towards the Arabian Sea. These rivers have small catchment areas. The lead time for the rain waters to reach the main river is very less. As such, these rivers swell up pretty quickly.

This is also cited as the reason for the lack of any flood-forecasting station in Kerala. Since the lead time is so less, no effective forecast can take place. In areas like UP or Bihar, the flood forecast stations run by the Central Water Commission (CWC) issue forecasts up to a day or two in advance. In a state like Kerala, say CWC officials, predictions of water levels cannot be given more than three to four hours in advance. CWC has 22 monitoring stations in the state but not a single forecast station, which prepares and sends forecasts to the state government to take precautionary measures.

The absence of any mechanism to issue flood warnings caught the state government off-guard and ill-prepared.

The unfolding of the current crisis is also being blamed on the rapid urbanisation, deforestation, and creation of new settlements in low-lying areas. Because very few, if any, reservoir waters were being released into the main channel of rivers for several years now, the carrying capacity of these rivers has also reduced. A large number of new habitations and business establishments have come up near or on the flood-plains. These were the first ones to be inundated when the rivers got flooded this year. Even the Kochi airport, which got flooded and has been closed for operation till August 26, is located very close to the flood plains of one of the rivers.

Thirty hours after a chunk of a hill came down on four houses at Kuranchery in Thrissur on Thursday, August 16, burying 23 people, hope waned. By 6 pm on Friday, four people were rescued alive, 12 bodies had been retrieved and the search was on to find the others.

With every passing minute, the wait for any signs of life under the mountain of slush, debris and uprooted trees gets achingly long. Six earth movers have been working relentlessly, shovelling slush and depositing it in tipper trucks waiting in queue.

“This is the single largest tragedy of this monsoon season in Kerala. Nowhere in the state have we lost so many lives in a single tragedy. We have rescued four people and are hoping to find the others, though we don’t expect them to be alive,’’ says deputy tehsildar E N Raju, who is overseeing the rescue work at the landslide spot.

It was at 6.30 am on August 16 that a portion of the hillock crashed down on the four houses. “We could find the debris of only three houses. We don’t even know where the fourth house was situated. Everything has been washed away,’’ says Aneesh, a local resident who is now volunteering with the rescue team.

“As the landslide happened near the Thrissur-Shornur highway, we could immediately move to start the rescue operation. That is why we would rescue four people and retrieve 12 bodies within the first three hours. Luckily, the communication network was not affected in the region. Besides, we have a wireless communication system to update authorities about the operations,’’ says Raju.

On Friday, the second day of the search, with hope of finding any more survivors dimming, three ambulances stand

waiting, with stretchers and shrouds in place. Just then, the operator of an earthmover notices a leg sticking out from the debris. He raises an alarm and flags down the operator of another truck. One of the ambulances drives up to the spot and the body is taken to the medical college hospital in Thrissur.

“The bodies can’t be identified immediately. Our concern is to take out all the bodies,’’ says local panchayat member C V Sunil Kumar, who is camping at the site. Kumar says the mishap was totally unexpected as the area was not landslide prone. “The landslide happened in a forest. There was no construction or any other human intervention, which is usually blamed for landslides,’’ says Kumar.