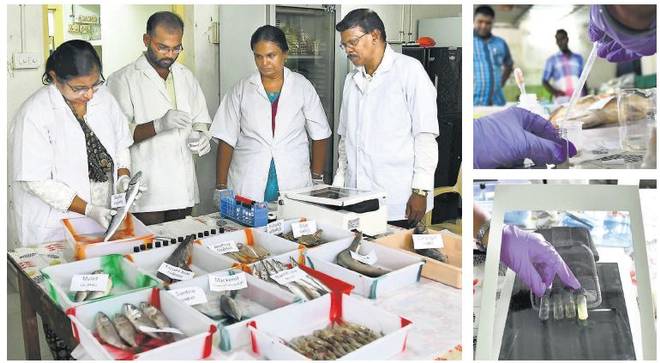 FAULTY: The Director of Transport has exposed the farce of testing fish for formalin and ammonia, pointing out that only very limited samples in the front containers were being tested. (above) Scientists of the Tamil Nadu Dr J Jayalalithaa Fisheries University conducting tests the way they should be done!

And a few stray thoughts on confirmation that the testing of formalin for fish being imported into Goa is a joke and farce. We previously revealed that under the Right of Information Act, the FDA admitted that all samples of fish imported into Goa during the ban period had tested positive for formalin.
During his first brief return to Goa from New York, Manohar Parrikar ordered testing of fish for formalin to be carried out at the two main check posts at the southern and northern entry points of Goa — namely Pollem and Patradevi. We reported on how the testing process is rigged in that samples are chosen not at random, but given to the inspectors by the truck drivers.
We had pointed out that the FDA has very few qualified staff to check formalin for fish. In fact, with the festive season starting, they are busy testing the quality of adulterated sweets. It has now been revealed that the FDA has been using employees of the Fisheries Department and even motor vehicle inspectors to test the imported fish for formalin and ammonia. Among those who were hired was an assistant electrician from the Fisheries Department. The Fisheries Department deputed six persons including the assistant electrician and his helper.
The FDA has also asked Transport Department officials to help them check the quality of the imported fish. The Transport Department has made it very clear that its motor vehicle instructors do not have the qualifications or the legal status to monitor the quality of imported fish. The transport director has also pointed out that the department is very short staffed and the diversion of Transport Department officials for checking formalin in fish will stress their remaining officials even more.
Meanwhile, the FDA has refused to respond to the RTI application of Sanjeev Raiturkar who has been consistently following up the formalin fish scam. No action has been taken against Ibrahim Shaikh, who is the president of the Fish Importers Association and a close buddy of Vijai Sardesai. It looks like the people of Goa will only get some relief when four PILs, filed against the FDA by Sanjeev Raiturkar among others, come up for hearing in the High Court!

And a few stray thoughts on Chief Minister Manohar Parrikar rushing back to Goa two days ahead of schedule on Thursday evening, belying rumours that he may have to extend his stay at Sloan Kettering in New York. His return was probably prompted by the on-going attempts to topple his government and replace it.
Ironically, the first of these attempts was made by the senior most BJP leader Shripad Naik, who is the minister for Ayush at the Centre. Shripad Naik, who was the favoured candidate of the BJP for the chief ministership right from the time the BJP staked its claim to form the government, has been sidelined by Manohar Parrikar. Every time there has been a vacuum Shripad Naik has attempted to replace Manohar Parrikar as chief minister.
When the news came that Manohar Parrikar has taken ill again 24 hours after his return from New York, and he will have to be rushed back, a core group of the BJP wanted a change in the leadership. The group, which included Shripad Naik and Goa BJP general secretary Sadanand Tanavade, was planning to go to Delhi to meet the BJP national president Amit Shah to make alternative arrangements.
They were not aware that Parrikar has his spies everywhere. Parrikar came to know of plot to replace him and summoned the members of the core committee and told them that he was irreplaceable. Parrikar pointed out to them that the MGP and the GF have extended support not to the BJP but to him personally and may withdraw support if any other BJP MLA was appointed as chief minister. Parrikar is so close to Prime Minister Narendra Modi, whom he has helped at every stage, that Modi also ruled out replacing Parrikar, particularly when he was not well.
There were reports that Parrikar suggested Speaker Promod Sawant’s name for the role of acting CM which was rejected by the alliance partners. Rumours have grown and multiplied at least on Facebook, with claims that Digamber Kamat, who was originally part of the BJP, was returning to the party. A Goa-based journalist even planted a story in the ABVP channel that Digambar Kamat had a meeting with BJP President Amit Shah.
There is a tu tu mai mai going on between the Congress and BJP. The BJP is claiming that three to four Congress MLAs have approached them and want to join the party. The Congress on the other hands claims that BJP MLAs, particularly all the Catholic MLAs, want to quit and join the Congress. Parrikar must have realized a headless Goa cannot survive long and even the BJP high command might lose its patience with him. It is to be seen whether Parrikar gracefully retires on medical grounds or continues to stick to the kodel as if he’s in a Fevicol ad.