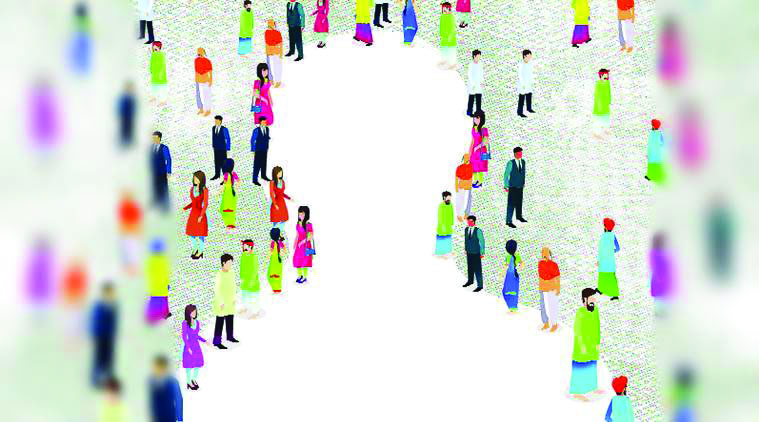 NARROWING BOUNDARIES: Historically India has been a melting point of race, castes, religions, and classes, which now seems to be narrowing down to just the Hindutva identity

A young Muslim woman married to a Tamil Brahmin laments that the Indian identity is being compromised by the ruling BJP. She points out the saffron brigade is trying to impose a Hindutva identity on Indians

Twenty-six years ago, while a masjid was being demolished in northern India, I was studying journalism in faraway Los Angeles. Perhaps, that’s why it took a few days to grasp that much more had been destroyed than a mere structure.
Realisation struck in the most unlikely of settings — a potluck party on campus. A room full of people had come together to eat chicken curry and cut a birthday cake — all post-graduate students on their way to becoming engineers, economists, computer scientists. All Indians. All my friends.
I remember walking down the university-housing corridor towards the music and chatter spilling from the half-open door. I remember stepping into the room. And I remember the scatter of remarks — as sharp and wounding as shrapnel:
“…the mosque was not even in use…”
“…these people have no loyalty towards India…”
“…are they even proper Indians?”
Then a silence — as sudden and shocking as a gunshot — followed by glances that held a peculiar mix of apology and accusation. An unsettling sense of a verdict being passed. Till yesterday, I had been That Short Bombay Girl in 209 — a notoriously bad cook, a teller of over-the-top tales. Today, I was a Muslim. A person of dubious loyalty, of uncertain worth.
In that painful moment, I realised two things. That, unlike anybody else in that room, I was expected to prove my Indianness. And that something invaluable and fragile was under threat. An intangible entity — not exactly tolerance or trust — but more that brave optimism expressed by our national pledge: “All Indians are my brothers and sisters”.
I had always imagined the Indian identity as a blanket that accommodated us all with casual generosity. Without debates about melting pots and mosaics. Without terms and conditions. It was capacious enough to encompass my Hindi-hating, MGR-loving Tamil fiancé; my south Mumbai friends who ate dosas with forks and knives and spoke the Queen’s Hindi; Marxist classmates who shunned all displays of patriotism; loud votaries of a Hindu rashtra; Catholic nuns who spoke Konkani and looked to Rome; Muslim relatives who prayed facing Mecca.
Who then was this “Proper Indian”? And why had I been deemed inadequate?
Perhaps, because my mother is a Bohra Muslim, I avoid pork and have an aunt in Pakistan? But then my father was a Parsi who shared a special relationship with a flotilla of saints, including Saint Anthony, Mother Mary and Sai Baba.
Moreover, I was probably the only person in that room whose official documents listed her religion as “Indian”. I was definitely the only person in that room who planned to live and work in India. But that, clearly, wasn’t enough to qualify as a Proper Indian.
My TamBrahm husband and I did come back. To this land that has absorbed so much over the centuries. Jalebi, biryani, our beloved cup of chai. The sari blouse; the great Indian railway bazaar. A country that embraced those who spoke Urdu, English, Telugu; those who danced Bharatanatyam and those who boogied at the disco; and even those who passed disgruntled remarks in the ilk of “What is left in this country, I say? Useless place.”
Of course, there were riots, stereotypes, suspicion. Even so, we believed that the Indian identity was elastic enough to deal with varied dialects, diets and opinions. That it rejoiced in the wonderful richness.
When our daughters were born, we named them Aaliya, Nisha and Naima Ramakrishnan. One acquired a Hebrew name made famous by an American pop star; another a Sanskrit name that I had long loved; the third an Egyptian name that my music-obsessed husband chose because Naima was John Coltrane’s wife.
At the hospital, we confronted the disapproving matron and made sure that the girls’ religion was listed as “Indian”. They were Hindu, Muslim, Parsi — with names borrowed from everywhere. You couldn’t get more Indian than that.
No longer, though. Sometime during their short lives, things have changed. Suddenly the Indian identity is a constricting straitjacket rather than a comforting blanket. Exclusion is hot. Inclusion is not.
The Proper Indian — that mythical being that I first encountered at a potluck party in Los Angeles — has acquired heft. To be a Proper Indian, you need to sing the national anthem in theatres and the national song in schools. You need to believe in the nuclear prowess of long-dead ancestors. To fulminate over the sacking of certain temples a thousand years ago. To justify the omission of figures like Akbar from our history books. You need to disallow alternative interpretations of the Ramayana. To swallow dubious statements and statistics without a murmur. To encourage different communities to behave like oil and water — incapable of sharing a building compound, a marriage or even a common dream.
New conditions pop up with alarming regularity. Some months ago, my husband became involved in a quintessential Mumbai drama. A car executed an illegal turn. A BEST bus banged into it. The man and woman in the car were unapologetic. They wanted the bus driver penalised.
Onlookers and traffic cops contributed their bit. My husband entered the fray and cited the laws of the land. This infuriated the woman in the car. “What kind of an Indian are you anyway?” she squawked. “You can’t even speak Hindi.” To which my husband launched into a lecture about the marvellous languages and cultural diversity of India — all in chaste Tamil, much to the delight of the onlookers.
Amusing though it was, the incident underlines the new reality. That you can get away with illegal turns, mob violence, rape and vigilante attacks — just as long as you brandish the nationalism card. Which is why we must keep asserting that while the Proper Indian has a place in this country, so does the Improper Indian.