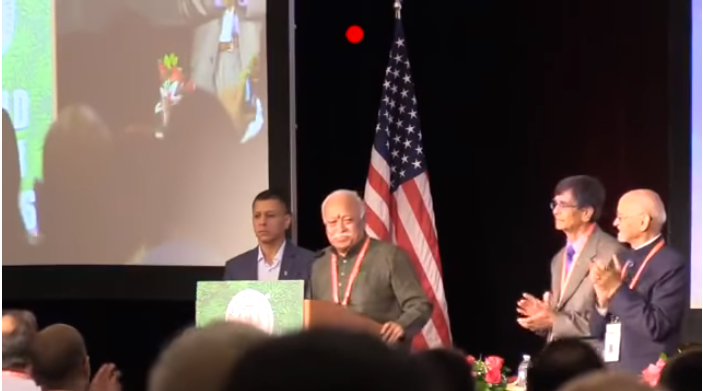 RSS Chief Mohan Bhagwat, speaking at the second World Hindu Congress (WHC) which coincides with the 125th anniversary of Swami Vivekananda’s speech at the Parliament of World Religions in 1893, in Chicago, implied that the minorities were wild dogs, threatening the survival of the Hindu lion!

A this speech at the second World Hindu Congress (WHC) coinciding with the 125th anniversary of Swami Vivekananda’s famous address to the Parliament of World Religions in 1893, in Chicago, Rashtriya Swayamsevak Sangh (RSS) Chief Mohan Bhagwat insulted the great Indian saint by calling Hindus ‘lions who were being hounded by wild dogs’. The implication is that only fanatic fundamentalist saffron chaddiwalas are real Hindus. Presumably Bhagwat implies that Muslims, Catholics and Dalits are wild dogs who are harassing the Hindutva lion.

Swami Vivekananda in his speech did not talk about Hindutva. He spoke about a Hindusim which welcomed everybody. An inclusive Hindusim which embraced Muslims, Catholics, upper caste lower caste Dalits, schedule castes, and every citizen of India or the world irrespective of caste, community or creed. You can judge this for yourself for turning to page seven where we have reproduced Swami Vivekananda’s original speech so that our readers can judge the difference between an inclusive and the exclusive Hindusism that Mohan Bhagwat is preaching.

To the RSS and Mohan Bhagwat, tribals are not Hindus — even though for political reasons they may try to convert tribals. There are stories of the RSS kidnapping tribal children from Nagaland to convert them into Hindus. The RSS has never hidden its animosity against the Muslim community which represents only 14% of the population. In more recent times the Christian community has also been the subject of atrocities by organisations like the Ram Sene, which are all linked to the RSS.

It is not a coincidence that a few day after Mohan Bhagwat gave his speech, the Sanatan Sanstha and the other fundamentalist Hindu organisations in Goa, who are been accused of the murder of Gauri Lankesh and Dr Narendra Dabholkar, held a rally in Ponda against the demand for a ban on the Sanatan Sanstha.

The agenda of the RSS which is the driver of the BJP Rath Yatra is very clear. Convert India into a exclusively Hindu country, where there will be no place for minorities and where the status of Catholics and Dalits and Muslims will be the same as the status of Hindus and Catholics in Pakistan.

The target of the RSS and the BJP is to convert India into another Iran or Iraq. A Hindutva version of the theocratic state where lynching of those who are even suspected to eat beef, leave alone kill bullocks, will be punishable by death. A state where all the mosques and the churches will be demolished, as the Babri Masjid was demolished over two decades ago.

WHO IS THE WILD DOG

The RSS Hindu is not a lion. A lion is a noble animal which attacks only when it’s hungry. The RSS is like a hyena which is the scavenger of the forest. It will attack anybody without any reason.

But Mohan Bhagwat’s reference to wild dogs was apt in another way. It is the wild dogs of the RSS that have been let loose on minorities and Dalits.

It may be recalled that in UP a Muslim was brutally killed merely on the suspicion of keeping beef in the house. The UP government has even proposed the death penalty for cow slaughter.

Similarly in Rajasthan gau rakshaks have the freedom to kill any Muslim or even Catholic merely on suspicion of having eaten beef or slaughtered cows. In Gujarat, Dalits who were skinning a bullock which is their traditional job, were brutally attacked by the gau rakshaks.

That the RSS tail is now controlling the BJP wild dog is clear from the statement of Narendra Modi in his address to the National Executive. BJP national party president Amit Shah strongly defended the arrest of the alleged ‘Urban Naxals’. In his address to the party executive Shah depicted the political debate over the arrest of Dalit and human rights activists as the battle between a nationalist BJP with a programme for making India and parties like Congress who want to break India. Apparently anyone who disagrees with the BJP, and more specifically Narendra Modi and Amit Shah, is anti-national.

More recently Modi proclaimed that the BJP will be in power for the next five decades or 50 years. Amit Shah declared “once BJP wins the 2019 Lok Sabha elections no one can throw us out in 50 years”, raising suspicions that if the BJP is elected to power again in 2019, like Adolf Hitler in Germany, they will abolish elections, ban all political parties and proclaim a dictatorship of Hindutva fanatics.

If this happens, Muslims, Catholics and Dalits will become refugees in the land of their birth. Secular India will be dead and the Constitutional guarantees of freedom of speech and freedom of worship and freedom of movement will be destroyed forever. The BJP under Amit Shah and Narendra Modi may even set up even camps like China has done to force the Muslims to give up Islam and become Chinese.

We are not talking about something hypothetical. It is already happened. The experiment is almost complete in Assam. The state where the National Citizens Register has been proclaimed under which all Muslim residents, or at least the majority of them, have been excluded from the citizen’s list in Assam on the grounds that they are all refugees from Bangladesh.

Unlike in the case of the US President Trump who has separated children born in the US (who automatically become citizens) from their parents who are illegal immigrants, the BJP government in Assam may even force children born in Assam out of the state and drive them to Bangladesh. This may happen in other states like UP, Gujarat and Rajasthan where minorities are been systematically harassed.

In the latest outrage, Pune police, controlled by the BJP, raided the residences of activists all over the country and arrested some of them. Even the residence of Dalit scholar Teltumbde, a GIM professor right here in Goa was raided. Even while the matter was being challeneged in various High Courts and the Supreme Court, the Pune police held a press conference claiming that they had proof that those arrested were involved in a plot to kill Narendra Modi.

The Supreme Court which is the only hope of the country refuse to give custody of the social activists and has kept them under house arrest. The Supreme Court also blasted the police for the media trial that they engaged in by holding a press conference when the matter was before them.

The threat is real. Both the RSS and the BJP have made their agenda clear. They are projecting a new India where there will be no place for minority. They are projecting new India where people will have no right to speak. Where the right to dissent will mean being put away in jail like they do in China. Indeed an Indian student who had returned from Canada for a holiday was arrested for raising a slogan against Modi on a flight from Chennia to Tuticoral on the complaint of the BJP chief of Tamil Nadu.

The mid night knock might come at any time for those who are critical of the Modi Government. But that does not mean we go quietly into the night like the many activists who are silent about the unjustified raids and arrests of other activists.