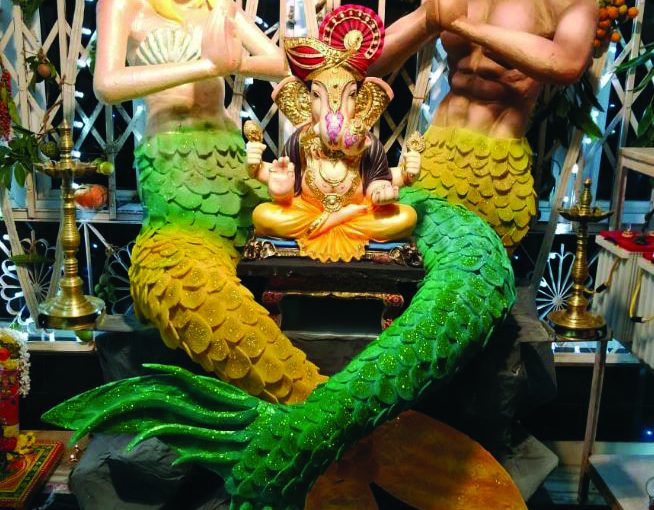 SOMETHING UNUSUAL: Lord Ganesh is flanked by a mermaid and merman couple in this artistic depiction at the Vagle residence in Panaji!

GOA FORMALIN in fish, illegal mining, beef politics, cash for jobs, hill cutting, manufacturing of narcotic drugs, and not a single arrest, leave alone conviction! Who does the government work for? Not for the people! Not for fair play. Not for life. They work for the business class alone and themselves.

Amidst all this the public is powerless. Even when their health is threatened! How has this come to pass? Supporters of this government cannot be silent. They need to think first and then act. What are the four pillars of democracy doing?

The Legislature and Executive themselves are poisoning citizens. They are either puppets of the Central BJP favoring a handful of businessmen or themselves favoring builders, fish and drug mafias, etc. The Opposition is silently colluding with ruling members either out of fear of blackmail.

The judiciary still holds hope but is also threatened by the Centre. The media is brought with very few still able to fight. The citizens are now considered the fifth pillar of democracy. We need to act. The only way Goa can be saved is by cleaning the Augean stables. For 30 years now the LA has not been cleaned! We need to dump all 40 MLAs for not just selling off Goa but having scant respect for people’s lives and livelihood.

The Opposition has not fought for arrests, they fight for issue of birth certificates and fuel price hikes, not for quality of life of the people. Talk by certain ministers is that they cultivated vote banks and these vote banks are  no longer happy with cash: They now want government jobs!

New candidates must come forward and people must be urged to refuse cash for votes this time. People’s networks towards this aim must start campaigning now. This time it should not be a case of having a long agenda but just one agenda: Cleaning the system. If the existing parties wish to contest, then they cannot field any sitting candidates or immediate past candidates. The BJP, even with new faces, just cannot be allowed to return. They have shown enough of their poor character and ideals and incompetence in governance. It is now a matter of life and death. level.

GPCC President, Girish Chodankar has hit the nail on the head. The GSIDC (Goa State Infrastructure Development Corporation) and the IPSCDL (Imagine Panaji Smart City Development Limited) have usurped the powers of the CCP (Corporation of the City of Panaji) and formed a parallel, higher level authority with no accountability and autocratic in nature. The CCP has been relegated to becoming the housekeeper of Panaji, when since the CCP is an elected body, it being the representatives of the people of Panaji should be in-charge of running the affairs of the city. Further, the CCP gets a measly sum of Rs. 30 crore only while the GSIDC and the IPSCDL a whopping sum of Rs. 2000 crore. It is high time that the GSIDC and the IPSCDL should be run by elected representatives. The main beneficiary of these two bodies the GSIDC and the IPSCDL is obviously the BJP, and ex-Panaji MLA, Siddhart Kuncolienkar should not have been appointed as the chairman and vice-chairman of the GSIDC and the IPSCDL, since definitely the needle of suspicion of corruption can be pointed out to the concentration of power under him while controlling the purse strings. The city is in the grip of several problems such as bad roads, ineffective drainage system, traffic jams, parking problems which were supposed to be controlled by the CCP. Mention has also to be made that the elections to the Goa Urban Co-operative Bank Limited have been shrouded in a cloud. If those supposed to maintain the rules and live according to the law, themselves break it, then the common man will follow suit. Let there be transparency in the functioning of bodies especially involved in big projects worth thousands of crores.

WE in the Aam Aadmi Party (AAP) would like to state that the FDA’s own report exposes the government, and vindicates our claim that the government has compromised with the formalin in fish case under pressure from fish agents. From day one this government has been hiding the real facts and thereby endangering the health of Goans.

AAP State Convenor Elvis Gomes had on Sept 5 itself revealed that there exists a report which FDA was suppressing as it contained damning facts and exposed the role played by FDA director herself in misleading the public. The report by designated officer Iva Fernandes is now public and contains shocking facts and events that clearly establish the intervention of the FDA director in influencing the investigation and compromising public health. It is a crime against the people of Goa.

Even after two whole months since the first came to light, the government has not taken any action or registered a case under the criminal sections to  investigate the offence. The onus now shifts on the health minister to reveal the whole truth and punish all those involved. AAP has placed the report before the High Court in a petition filed and the next hearing is on Sept 18.

A poem for the times for whatever it is worth;

Myriad are the ways to kill a relationship!

Plunge the knife, keep turning it

They mean nothing to you

Make the most of them

Until the time comes

For the perfect kill –

Nourishing the fires of guilt

Call it the wheel of karma

Forever turning round, and around

Myriad are the ways to kill

Getting high on the scent of victory

As distances grow and fade, almost…

Is life nothing more than expiation

Will you take care of me?