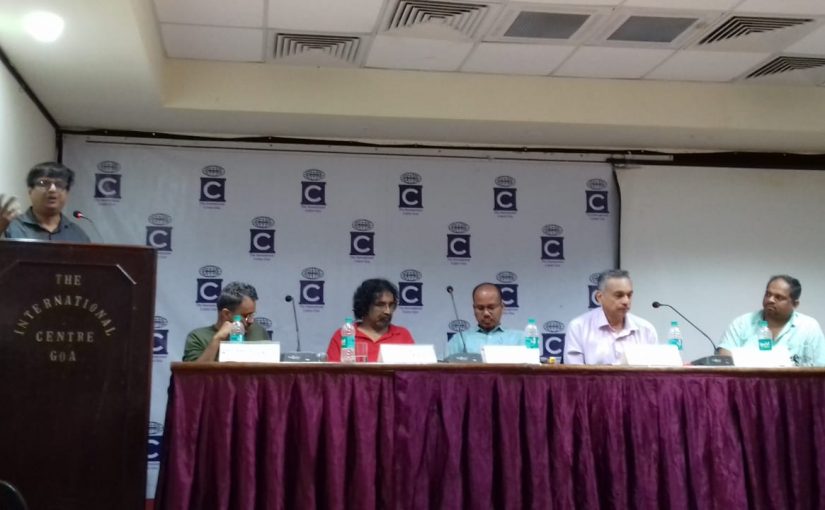 MY mind was not all there but I decided to give Shravan-ka-mahina a skip and wandered off post-lunch on a Sunday afternoon to find out what heritage liquors are all about! It was tea-time actually. They were having this very serious panel discussion on `Heritage Liquors of India: Issues and Possibilities’ put together by two of our most passionate, enterprising liquor businessmen, namely Desmond Nazareth (MD of Agave India) and feni baron Hanzel Vaz, at the International Centre Goa on Sunday, 4.30 pm to 7 pm.

Came 7 pm and near the ICG lawns there was Desmond Nazareth’s fairly newly arrived distilled liqueur `Mahua’ to taste, Regan Henriques Rhea Distilleries feni…and ahhh…hhhh! The mahua (liqueur or distilled spirit drawing its name from the name of the tree flower which grows abundantly in several Indian states) burned fierily down my gullet while Assam’s judima quenched and cooled the fire, at least momentarily.

Funny, I was immune to Desmond’s `Mahua’ but fell for Assam’s native liquor of the Ahom people, prepared by the women of the tribe using home grown rice, three kinds or one kind, to brew and turn into the pale or amber gold of judima! Quite a lyrical word introduced to the audience by Assam’s Uttam Bathari.

No, judima doesn’t taste like Madhya Pradesh or Maharashtra’s country mahua liquor (liquor here as in general availability locally), or the Ladakhi chaang which I can drink in lieu of buttermilk any day (like caju apple neero or urrak)…but both liquors have a slow kick of their own. Judima has a slow kick and glows in a class of its own. Judima is not supposed to have sour notes but the sweet notes of rice…it’s a traditional rice wine of Assam made in every home for family or community consumption and its magic naturally differs depending on the hand that has rocked it – I mean the loving hands of women, be it grandmother, mother, daughter-in-law or some aunt.

Uttam Bathari & Co tell me judima is considered heavenly liquor and babies get a drop on their lips when born and now and again as protection against infections! And yes, the women not only brew judima but also join in imbibing it for warmth and much more. It’s cultural routine and part of their agricultural lifestyle! The so called native and now heritage liquors out in the north-eastern states of the country enjoy a wholesome reputation…judima is a rice wine (but not like Japan’s clear white sake which is distilled). When couples get married they take judima along with them as common dowry or something like that. (Sigh) It’s time to visit Assam anew one of these days for judima’s sake!

EVERYONE in the panel discussion waxed lyrical over India’s fabulous array of hitherto country liquors (please note, not like killer illicit liquor brewed or fixed in dirty urban hole-in-the-wall places secretly) – beginning with Goa’s feni, caju feni, which if you please is the only liquor made in India which has acquired geographical indication status, or GI! Sounds vaguely erotic, no? All our other heritage liquors should also get their GI status if you’re asking me. But please, let’s define them properly and legally. I’m no liquor connoisseur but get the impression that there’s a lot of confusion in the country on the subject of imported, made in India foreign liquor, etc. And now with Agave India’s Desmond Nazareth as a successful creator and wholesaler of `Desmondjji’ (Nagpur orange liqueur) and now `Mahua’ …more folk are talking about going places with our very own native local liquors in state after state…so unheard and unsung nationally or internationally.

HEY, most every state has its own native liquor and sometimes liquors as in the case of the north-eastern states and they’re superlatively good because they’re home brewed, may be distilled in small quantities with local fruit, cereals, herbs. Goa, for example, has palm feni to begin with, then caju feni – but I understand that only caju feni has the GI and not the older palm feni which predates the arrival of the Portuguese with their caju trees (and other trees and plants) from their `new world’ colonies…indeed, we owe the 14th-15th century Portuguese adventurers-cum-colonialists a lot by introducing us to fauna and flora from the new worlds and civilizations they discovered, conquered and ruled for hundreds of years!

Something about the heritage liquors panel discussion. There were Desmond Nazareth, Rahul Srivastava (social anthropologist, co-founder of urbz.net), Aniruddha Mookerjee (author, wildlife researcher, who makes his own mahua liquor and was generously offering it to all who wanted to find out about it), Gurudatta Bhakta (head, Goa Cashew Distillers & Bottlers Association)…several speakers from the captive audience who had their own take in Q&A which followed discussion.

Isn’t alcoholism a male problem? Someone asked. Of course that is also another narrative, replied Anniruddha Mookerjea. Funny, in most tribal societies it is the women (perhaps at the mercy of intoxicated hubbies) who do much of the farming, brewing-distillation of local heritage liquors! The bottom-line presumably being one must grow up and learn to treat liquor as a social drink, for livening up life but not turning into a nightmare. One may drink for conviviality but not get drunk and be obnoxious…often hard to find given our sorry urban and rural contexts/premises — or am I dreaming it all up? I don’t think so.

In any case liquor has a questionable health brief. Too much imbibing may give you a fatty liver and an addictive mind taking a slow toll of physiology and psychology. Me, I love the occasional liquor or liqueur, say a refreshing dry white wine from Germany or some of the aromatic sweet reds from any of the Mediterranean countries…the odd Indian Madera or Satori from India. But given a choice I look forward to relishing the seasonal neero, urrak, chaang …now judima! Of course heritage liquors be they brews or single/double/triple distillations — wines, beers or fine liquors/liqueurs — are special and would be more nutritionally sound…

But I’m not for large scale industrial manufacturing of liquors, be they our very own native liquors! Once industrialized or fixed or standardized for factory manufacturing, bottling, retailing, marketing widely…I dare say original flavours would be lost, adulteration will creep in along with longer shelf life. Can they still be counted as heritage liquors? Most of these liquors end up as what is called club mixers, like see what’s happening to feni, it’s going into making cocktails at party scenes. Sorry, that’s corruption of heritage liquors, agree or disagree with me.

My vote would be for Ladakhi chaang, no, maybe judima…or what is that liquor they make out in Kashmir or is it Kinnaur, out of apples and apricots? Say they are seasonal or ephemeral half-juice, half-liquor heritage liquors but that’s the way I like to drink them. Can’t be marketed big-time!