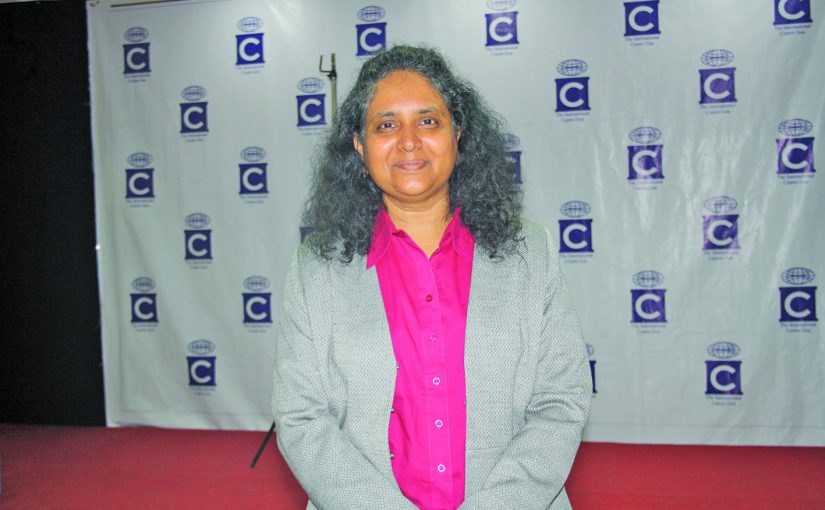 IMPROVE: Cyber law expert advocate Nappinai NS in Goa…our cyber laws need evaluating and brushing up to be on par with those of first world countries

MOST of us are not conscious of it if we are not Internet driven — or digitally conscious, especially about how a younger generation of criminals are engaged in cyber crimes! Catch a talk by the very articulate, eloquent and amazing Supreme Court and Bombay High Court activist lawyer Nappinai NS and one may be left quite shell-shocked and updated on the subject of where information technology is taking the world. Into a hornet’s nest, some would say; into a more exciting world more would say!

I am sorry the effervescent Nappinai didn’t get much of an audience that day at her talk on `Freedom of Speech Online & the Law’ at the International Centre Goa on August 18, 2018. This unusually named Nappinai NS deserves to be better heard and what she says taken cognizance of, especially by the law enforcers…sorry, sorry, no police people were in the audience.

Fact is increasingly, private and public life is being impacted on by growing, booming and bursting information technology which is not just Internet, Facebook, Twitter, Instagram but much more nowadays when we hear of cloud technology, crypto currency, blockchain and more. We need to be clued up because all of this is ushering us from a hitherto familiar laid-back world of crime to something far more different and devastating. Advocate Nappinai NS is specializes in cyber crime and is vocal and active on Internet sites.

With increasing digital technology education a younger generation of ultra techno savvy can crack accounts to rob banks wholesale, broker deals illegally, skip the niceties of the law brilliantly to make a killing of whatever reckless and dangerous kind. As Nappinai says it all started with pornography being uploaded on the Internet, in fact Internet became a rage because it was pornography driven initially and from simulated videos it soon graduating to real crime being committed, recorded, uploaded…violent adult content matter is created for fueling sick minds and there are no controls in place.

WE may have arrived at the digital threshold with a smart phone even in the urban housemaid’s hands but are the laws to do with use and abuse of cyber security in place in India despite the IT Act? Are they rudimentary or sophisticated enough for civil society and law upholders to grasp, trace and pin down a whole host of continuingly new modus operandi when it comes to criminal fraud and escape…so that justice is done? That folk engaged in cybercrimes go to jail where they belong? For the harm they have done to the innocent and vulnerable of civil society?

The absolutely erudite Nappinai spoke of such things as “digital ghettoization” and a dizzy network of Apps linked with heinous and gruesome crimes which take place courtesy the manipulation of the safety network of electronic and digital technology. She asked: Are our cyber laws in India up to date with the best abroad? If the profile of crime changes, so must the profile of law enforcement and there must be data security and jurisprudence…increasingly advocates are dealing with cybercrimes and both legal community and courts must be clued up on how say in the case of the pharmacy industry many offenders may get away by saying “I have nothing to do with the crime, I only sell the goods!”

Nappinai also thinks the Aadhaar card makes citizens vulnerable when it comes to accessing information, “I have opposed Aadhaar right from the beginning!” Where does the right to privacy begin and end? Sounds like the story of the road to hell being paved with good intentions but…see what is happening around us and take stock of it! Surveillance systems may catch the conversation of murderers at the site of a crime and all of it can also be destroyed. Pornography is marketed today so insidiously that the law never catches up with the criminals! And then there are the hackers as young as 16-year-olds hacking sites to create financial and employment loss….also, malicious spyware can spy on anyone including children.

Software can be hacked and hardware destroyed and replaced so easily with no one the wiser. Making it difficult to pin down accountability, responsibility, data records…yet we are increasingly being imbedded in a world rapidly being technologised to make human beings marginalised in mind-boggling and breathtaking ways.

Yet nobody is taking a break to step back and ask, how much technology, where, when and why? For exploitation “information is a gold mine” for those who have evil designs and Indians are already being profiled with Aadhaar card, with biometric devices whereby thumb, eyes, voice imprints can immediately identify and place them, “Such identification and verification can boil down to… prove you are an Indian!”

Increasingly, with a national grid being put in place “We will live in a fear and freedom driven world.” A totalitarian government may easily implement a policy of no Aadhar card, no services and benefits as and when it suits it! You are at the mercy of a government good, bad or ugly. Of course, any right to privacy goes in the dustbin! Also whose privacy will be respected and whose privacy for all to see?

In India the law may permit monitoring but asks advocate Nappinai, “Are checks and balance laws also in place?” Indeed, her question is, How free are we when technology is manipulated to spread “a chilling effect, where people are forced not to be free!” When the reins of technology are in the hands of a government imagine situations of say an Internet shutdown and we don’t know what’s happening in Kashmir (or Kerala)?

Ms Nappinai raised a hornet’s nest of questions in her talk, I must say, and left most in the audience even more shocked as it dawned on them clearly how the world as we knew it is taking a turn into the still dark, unfathomed waters of use and abuse of technology at various levels.

If you want to know more read her book “Technology Law Decoded!” From all accounts the pioneering manual offer the lowdown on cyber laws in the country and makes a case for further critical updating in the interests of data protection and security. Cybercrimes are coming up increasingly in court and young criminals are mentally evolved too when it comes to stealing and hacking…for instance there must be laws to prevent crypto currencies from being issued in something called darknet. Our laws need upgrading to be on par with cyber laws abroad! And if Ms Nappinai NS ever comes to Goa again, do catch up with this exciting speaker extraordinaire enough to wake anyone up from complacent slumber.

Later on my way home I found myself asking myself if it would be possible to live without too much technology in life…it is too challenging, tiresome and impinges too much on quality of life, making it second rate, third rate in real value?

Hey, folk in the countries of the first world in Europe and USA have tried to shun the mod cons of technology and failed! You may throw idiot-box, computer and smart phone in the bin but homes today are packed with industrial digital products (to start the heater in bathroom, washing machine, oven, air-conditioning, etc, etc) and then when you step out in public to take a metro train to work…you need your digital smart card to get in. Life is being reduced to itsy bitsy plastic card identification and nobody is calculating how much more the disposal of such hardware will further clog up and kill Mother Earth’s life-giving environment. Do you think sooner or later we will have to choose: Technology or Mother Earth? Hell’s bells, we’re choosing technology daily, increasingly and more and more.

Think about all this and on that note my dears, it’s avjo, poiteverem, selamat datang, au revoir, arrivedecci and vachun yetta here for now!