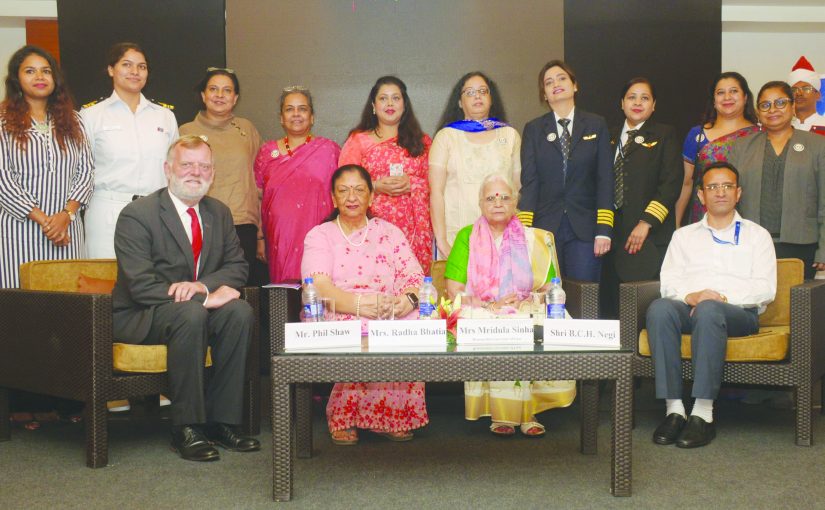 GO GIRLS! Governor Mridula Sinha was her charming best as chief guest at the concluding function of the ‘Girls in Aviation Day’ organized by the Women in Aviation International India Chapter and Lockheed Martin India, in Panaji on September 19, 2018. The governor stressed that equal opportunities in education, health etc, should be provided in society to all. Also present were President, Women in Aviation International India Chapter, Radha Bhatia, Chief Executive, Lockheed Martin India, Phil Shaw and APD Goa Airport, B C H Negi

Parents of budding footballers lament that their wards are not allowed time to practice on the grounds. The SAG is busy leasing out the same to Clubs and the AIFF.
The AIFF has made its HQ in Noida in keeping with its philosophy that the future of Indian Football lies in the North due to the physical characteristics of the locals: height and built. North has not been a footballing hub. In effect, what they are doing is wresting control from the rest of India.
Most age group trainings of AIFF teams are held in Goa which is seen as ideal for its hospitality and cheap ground lease costs, thanks to past GFA members. The SAG first hijacked all village football grounds from the villagers saying they would develop and improve the conditions. They then used Goan tax collections to do the work, and finally lease the grounds out to the AIFF and local I- league teams! Goans are truly second class citizens.
Iceland, ranked 131 in 2012, are now 31. Their population of 3 L is lower than Goas’ massive 15 L( more like 30 L) A key reason for this rise is the availability of 30 full-size all-weather pitches, seven of which are indoors, and almost 150 smaller artificial arenas that ensure youngsters at grassroots can continue to play football in winter, often inside indoor dome structures.
In Goa, far from building indoor pitches to provide grassroots youngsters to practice in the four-month monsoon season, the SAG ensures they are unable to practice in fair season as well!! No wonder there is not a single Goan in any age group India team, from having six members in the India team hardly four years back. Compare the thinking of Iceland with Goa SAG.
There must be a stop to this step motherly treatment of Goans. Goa’s hospitality cannot be misused to be condemned to only give till you break.
— R Fernandes, Margao

PROMISES, PLASTIC PROMISES
CCP promises Panjimites a plastic carry bag-free city! Can anybody believe that this will happen? It must be a joke or election voting trickery for BJP. CCP will never succeed in this promise. Just recently I went to KFC and found a notice saying “As per government law plastic bags are chargeable.”
Will CCP ask KFC management to remove this board?
I’m giving notice to Commissioner Ajay and Mayor Chopdekar for removal of this board and stoppage of plastic carry bags at KFC restaurant in Caculo Mall at St Inez.
— Stephen Dias, Dona Paula

WEEDING OUT FAKE BENEFICIARIES
RECENT newspaper reports have revealed the fact that over 8,000 fake beneficiaries of the Griha Aadhar Schemes have been weeded out. Is this scheme really necessary? Unlike the Dayanand Samajik
Suraksha Yojana, which is a social security scheme, the Griha Aadhar Scheme is akin to doles for housewives.
When the scheme was initially launched after the BJP government’s victory in the 2012 elections, Chief Minister Parrikar and his government left no stone unturned to berate the Union government then led by Dr Manmohan Singh. It was claimed then that the scheme is a respite from the skyrocketing prices of essential commodities, which make it difficult for a housewife to run her household.
Come 2014, the BJP gained power in Delhi, with a promise to decrease prices. Is the continuation of the scheme by the State government not a confession of the fact that inflation has not yet subsided? The fake beneficiaries need to be penalized and politicians who availed of this scheme should not be let
Scot free. Come elections, and politicians are ready to enroll women in this scheme in a bid to earn votes. These odd 8,000 fake beneficiaries have cheated and burdened the public exchequer. Each rupee given to them needs to be recovered.
— Vikas Kamat, Goa

smart city rhetoric
The other day I was at the Caculo Mall in Panaji. I parked my scooter opposite the mall and tried to cross over cautiously in the speeding traffic. In the midst of crossing over a biker just about missed me, he yelled out a string of curses for being so slow! Excuse me, if he had any manners he ought not to have been speeding at this particular crossing and why hasn’t proprietor Manoj Caculo taken steps to have a zebra crossing detailed here seeing how many folk do cross over to and fro?
At least with a zebra crossing folk may cross with some peace of mind for the onus is on traffic to slow down and give right of way to whoever is crossing the road. So much for all the smart city rhetoric we keep reading about these days in the newspapers, it’s all you know what….just talk and style, no substance.
— Pankajbala R Patel, Panaji

GOVERNMENT OF POTHOLES
IN 2003 during his earlier term as chief minister it was announced by Manohar Parrikar that anyone spotting a pothole on any road in Goa would be rewarded with `1,000. Ironically, today there is not a road without potholes all over. Despite the Bombay High Court having ruled that good roads are a fundamental right of every citizen, the roads across Goa are in a very appalling state. It is potholes and craters galore. Some roads which were hot mixed just before the monsoons have been washed away.
What a criminal waste of public funds. If there had been any proper quality control the roads would not have been in their current pitiable state. This government needs to wake up from its slumber and take the issue of pot-holed roads as an urgent priority.
— Aires Rodrigues, Ribandar