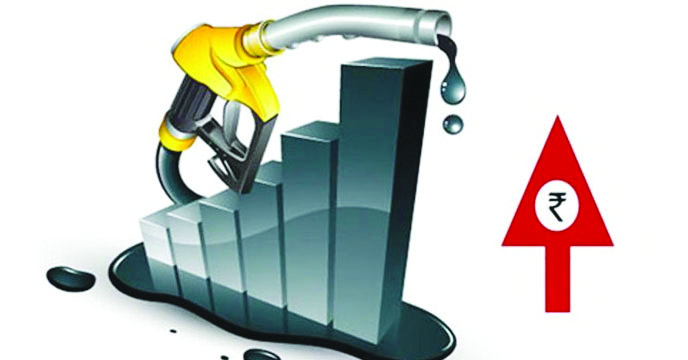 MOST EXPENSIVE: Petrol is most expensive in India, not only because of the increase in the price of crude but because of heavy taxes imposed by the state and central government. More than half the price of petrol consists of central excise, state VAT and dealers margin

Thanks to the linking of the price of petrol with the international crude oil price, the cost of petrol has crossed the `90 mark in Mumbai and `80 in Goa

Crude oil is close to reaching $80 per barrel in the global market, and petrol prices are touching new highs here in India — retailing at `86.72 in Mumbai and `79.31 in Delhi. While oil marketing companies kept the petrol and diesel prices unchanged on Wednesday, the prices are being hiked consecutively for the past 10 days.
A spike in crude oil prices has been seen due to several global factors, including a cut in oil production and US sanctions against Iranian oil import. While the situation in India seems much worse — with rupee breaching `71.50 mark against dollar and fuel prices failing to show any sign of relief — neighbouring countries like China, Nepal, Sri Lanka and Pakistan are also bearing the brunt of high crude oil prices, but still petrol is more expensive in India than most other countries.
The US sanctions against Iran — a prominent OPEC member and the third biggest exporter of oil to India — make it difficult for its allies like India to manage the oil demand supply. US President Donald Trump has already threatened that “anyone doing business with Iran will not be doing business with the United States”.
Let’s look at fuel prices in these countries, the US and the UK.

The United States
Petrol is being sold at `53.88 per litre ($0.64 a litre) in the US while diesel at `58.9 ($0.83 a litre). The country is one of the top oil-producing countries in the world. Fuel prices in the US are still lower than most of the European countries like the UK, the Netherlands, Amsterdam, Norway and Sweden. The country produces an average of 14.86 million barrel per day — around 15.3% of the world’s total oil production — compared to Saudi Arabia’s (biggest OPEC producer) 12.39 million barrels a day.

Pakistan
The petrol price stands at `65.2 per litre in Pakistan (112.8 Pakistani rupee) while diesel at `61.56 (106.57 Pakistani rupee) per litre. New Pakistan Prime Minister Imran Khan last week announced a cut in petrol, diesel and kerosene oil prices to contain the rising inflation. Pakistan is facing the biggest battle of bringing the country’s crumbling economy back on its track, but rising fuel prices may play spoilsport.

Sri Lanka
Unlike India, fuel prices change on the 10th of every month in Sri Lanka. During last month’s price update, petrol was priced at `69.14 (157 Lankan rupee), while super diesel was priced at `51.9 per litre (118 Lankan rupee) after `2 and `1 increase, respectively. The country recently introduced the monthly pricing formula to compensate the prices as per the global crude oil price variation.

Nepal
Petrol is available for `71.25 (111 Nepali rupees) a litre in Nepal, while diesel is sold for `59.43 (95 Nepali rupees). Just like India, the Nepali rupee, which is pegged with India’s currency, is also not performing well against the dollar. While the Indian rupee slipped to 71.12 on Monday, the Nepali rupee touched `113.83 against the USD. In the last four months, petrol and diesel prices shot up by `5 and `8 in the tiny nation.

China
The latest numbers show that petrol price in China — a nationwide average — is `78.95 (7.57 CNY). In Beijing, petrol was priced at `70.49 (6.76 CNY), while diesel was priced at `70.49 (6.76 CNY) on Monday. China is the world’s largest crude oil importer since 2017. The country imports around 8.4 million barrels a day. China imported around 56% of crude oil from OPEC in 2017 alone. Since Iran is also a part of the OPEC group, fuel prices could see a spike after the US sanctions, which have officially been cast by US President Donald Trump on August 7.

The United Kingdom
Like other European countries, the UK imposes a huge tax on commercial fuel, which makes up for over 70% of the cost of a gallon of gasoline. Petrol is `119.9 per litre (5.91 pound a gallon) while diesel was priced at `121 .8 (6.03 pound per gallon) in London.