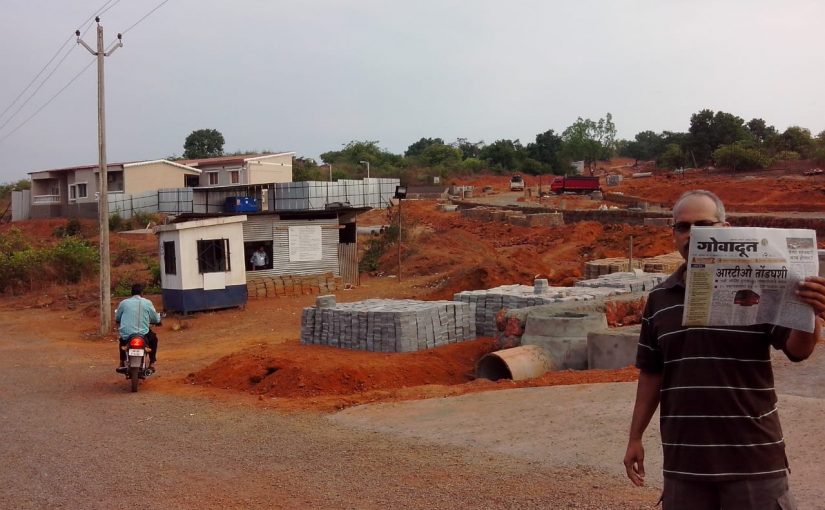 CANCELLED: The permission extended to the ‘Enchanted Woods’ project of villas and flats proposed to be put up by Gera Developer Pvt Ltd was scrapped by the Goa Bench of the Bombay HC despite the developer claiming clearance from the NGT. (abv) Illegal constructions that have to be demolished

Even if a builder claims that he has all permissions, a project can still be scrapped if the permissions were given mindlessly. All those who invested heavily or endorsed premium Gera projects stand the risk of losing their money. The Goa Bench of the Bombay HC comprising Prithvirak K Chawan and N M Jamdar has set aside the technical clearance given to ‘Enchanted Woods’ in the Betqui Candola village. This was in response to a public interest litigation filed by the Betqui-Candola Samvardhan Samitee, represented by advocate Nigel De Costa Frias, questioning the basis on which the TCP, Panchayat and GSPCB, cleared the project without considering the impact on the ecology and water, power and waste management infrastructure, in the small scenic village of 10,000 residents. By implication the cancellation of the permission also applies to the Adwalpalkar

VIRAJ Bakre vividly remembers the first time he heard about the Gera threat to Candola village, that would go on to consume the next six years of his life. It was a warm evening in early February 2013, when he attended a meeting called by the Shantadurga Devlay Residents’ Association (SDRA) to discuss a proposed development in the village. Fr Bismarque Dias was present and this was the first of many meetings convened to make the villagers aware of the threat to their village.
Fr Bismarque showed them an advertisement for the ‘Enchanted Woods’ project on the Gera website. The colony residents were shocked, but clueless about further action. It was Fr Bismarque who taught them about RTIs and got them started on collecting information they would need to fight the builders.
Fr Bismarque’s meeting had set the ball rolling, but a lot had to be done. The colony residents convened a meeting to chalk out further action. Arun Madgavkar and many villagers were invited. The Betqui Candola Samvardhan Samitee (BCSS) was registered under the Societies Registration Act in 2013 with representatives from various wards of the Panchayat. Arun Madgavkar was appointed president and Viraj Bakre volunteered to assist with all the record-keeping and documents.
As the BCSS learned more, they realised to their shock and dismay, that it was their own ward panch, who was also sarpanch, who was instrumental in giving all the licenses and NOCs to Gera. The BCSS (represented by Arun Madgavkar as the authorized member) filed suit against Gera Developers, the village Panchayat of Candola through its secretary, the State of Goa through the Chief Secretary, the Town Planner, the Chief Town Planner and the GSPCB.
Fr Bismarque remained a staunch supporter and was always available to help. He introduced the group to many environmental activists in Goa. After his tragic death, Abhijeet Prabhudesai and Diana Tavares of Federation of Rainbow Warriors continued providing strategic support to the society. BCSS owes them, the Goa Foundation, and other senior environmental activists a debt of gratitude for extending unstinted support over the past few years. Arun Madgavkar and Viraj Bakre remain the prime movers in this 6-year-long struggle, handling all RTI and court matters. The rest contribute in local activities and the Panchayat, although many lost steam as the fight dragged on.
However, finally the years of battling big real estate seems to have borne fruit. In a landmark judgment, the Goa Bench of the Bombay High Court, comprising of Justices N M Jamdar and Pritviraj K Chauhan, has ruled that “the impugned technical clearance granted by the Town and Country Planning Department of Goa dated 20th March and the construction license granted by the Betqui Candola village Panchayat dated 27th November 2015 are quashed and set aside”. This is despite Gera Developers claiming that an appeal by the BCSS against the environment clearance granted to the project was dismissed by the National Green Tribunal (NGT) on the issue of limitation. The HC pointed out that the NGT only disposed of the petition filed by the villagers of Candola on the technical ground that the appeal was filed beyond the period of limitation.
In its order, the Goa Bench of the Bombay HC rejected the argument of Gera Developers that once all permissions are granted no further scrutiny is permissible or required.
The HC noted “the respondent authorities have a duty to ensure that the object of the statutes under which they are established are not defeated. The relevant planning legislation in the state of Goa imposed a duty on the planning authorities

property in September 2007. The developers applied to the collector of North Goa on 31st December 2008 for conversion sanad. It also sought change of land use from orchards to settlement for an area of 1,27,120 sq mtrs. The area to be converted was to be determined only after strict verification of the contours and subject to road access to the property as per the gazette notification 1996. The attorney of the communidade of Candola in 2007 seems to have granted the application of the developers, giving permission for widening the 3 mt road to a 12 mts wide road to whomsoever it may concern without giving any thought to the impact it would have on the life and infrastructure of the village. (As per the rules of the communidade only the Administrator can give permission, that too only after the general body approves the same.)
It would appear that all the authorities concerned with granting permission for the project failed to apply their mind. Everyone blindly granted permission without applying their mind to the two mega projects — that of Gera with 818 dwellings and that of Adwalpalkar’s with 500 additional house units.
The TCP Department granted permission for conversion based on the plan submitted by a surveyor of the developers and not an independent survey.
The CTP ignored the objections from his own department.
The Attorney of the communidade agreed to sell the land without considering the consequences.
The GSPCB granted permission under the Air and Water Act despite the PWD making it clear that it is in no position to provide water and power to the project.
The environmental authorities also did not consider the waste management aspect of such mega projects.
The water supply department was asked whether it would able to supply water to this mega projects. The categorical answer was “with the existing infrastructure and pipeline network it is not possible to supply water to new multi-development projects.”
Even with respect of the hill cutting the villagers pointed out that the permission granted on March 28, 2015, was issued without site inspection.
Even the conversion from orchard to settlement was not done with due application of mind.
MORE REVIEW REQUIRED
APART from Gera’s ‘Enchanted Woods’ project in Candola village, its projects on the Kadamba plateau and Patto area need to be reviewed in the light of the judgment in the Candola case. It seems to be clear from the judgment that TCP and other officials responsible for environmental clearances, and the village Panchayat members themselves, were colluding with developers to destroy the village. It is very sad that the sarpanch of Candola who is the guardian of the village should have given permission to mega projects which would have destroyed the small beautiful village with population of just 10,000.
This is not true of only Candola but almost every village at Goa. Not only villages but large hilly areas like the Kadamba plateau. The green Goa of our days is all set to vanish to satisfy the greed of officials enjoying the patronage of politicians.

PANCHAYAT ACT GUIDELINES
The Goa Panchayat Raj Act, 1994 empowers the Panchayat to consider the applications for erection of building falling within their jurisdiction. Section 66 of the Goa Panchayat Raj Act reads thus: “66. Regulation of the erection of buildings.—
(1) Subject to such rules as may be prescribed, no person shall erect any building or alter or add to any existing building or reconstruct any building without the written permission of the Panchayat. The permission may be granted on payment of such fees as may be prescribed.
(2) If a Panchayat does not, within thirty days from the date of receipt of application, determine whether such permission should be given or not and communicate its decision to the applicant, the applicant may file an appeal within thirty days from the date of expiry of aforesaid period, to the Deputy Director who shall dispose of the same within thirty days from the date of filings of such appeal. If the Deputy Director fails to dispose of the appeal within thirty days, such permission shall be deemed to have been given and the applicant may proceed to execute the work, but not so as to contravene any of the provisions of this Act or any rules or bye-laws made under this Act.
(3) Whenever any building is erected, added to or reconstructed without such permission or in any manner contrary to the rules prescribed under sub-section (1) or any conditions imposed by the permission granted, the
Panchayat may,—
(a) direct that the building, alteration or addition be stopped; or
(b) by written notice require within a reasonable period to be specified therein, such building alteration or addition to be altered or demolished.
(4) In the event of non-compliance with terms of any notice under clause (b) of sub-section (3) within the period specified in the notice, it shall be lawful for the Panchayat to take such action as may be necessary for the completion of the act thereby required to be done, and all the expenses therein incurred by the Panchayat shall be paid by the person or persons upon whom the notice was served and shall be recoverable as if it were a tax imposed under this Act.
(5) Where the Panchayat fails to demolish the building which is erected, added to or reconstructed without the permission of the Panchayat, or in any manner contrary to the rules made under the Act or any conditions imposed in the permission, within a month from the date of the knowledge, the Deputy Director shall assume the powers of the Panchayat under sub-sections (3), (4) and (5) and take such steps as may be necessary for the demolition of such building.
(6) Notwithstanding anything contained in the foregoing provisions, the Block Development Officer concerned may, by notice addressed to the person responsible, stop any construction which is being constructed in violation of the provisions of the Act or rules or bye-laws made thereunder and refer the case to the Deputy Director of Panchayat. On receipt of the notice, such person shall forthwith stop the same.
(7) An appeal shall lie to the Director, within a period of 30 days from any order of direction or notice issued under any of the provisions of this section and the decision of the Director on such appeal shall be final.
Explanation:— For the purpose of this section, failure to communicate the decision by the Panchayat under subsection (2) and failure to demolish the building under subsections (3) and (4) shall be deemed to be ‘remiss’ in the performance of duties by the Panchayat. Section 66(1) of the Goa Panchayat Raj Act deals with the permissions to be granted by the Village Panchayat. Regulations prescribe a questionnaire which has to be fulfilled by the applicant. The applicant also has to submit drawings to show the dimensions of the plot, direction proposed as well as existing structures, access, road widening, distance, location of drains, water bodies and trees, existing well etc. A location map and parking layout has to be produced.