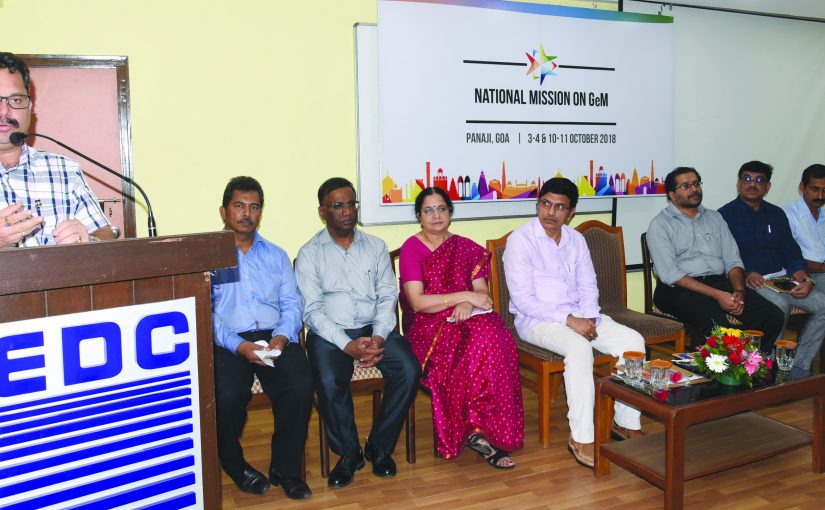 CASHLESS, PAPERLESS, CONTACTLESS? Newly appointed Power Minister Nilesh Cabral is all upfront about going digital in governance. He was speaking at a `National Mission on GeM’ workshop at EDC House in Panaji on Oct 3, 2018. He said GeM is a national portal, an initiative of Department of Commerce (GoI) to make public transactions transparent. Also seen in the pic are Finance Secretary Daulat Hawaldar and GeM deputy CEO Manju Sharma with other dignitaries

THE proposed installation of CCTV camera at the GMC’s morgue is a cover up stunt by Health Minister Vishwajit Rane. He loves to waste public money only so that some pockets may be lined. Already sophisticated CCTVs covering a number of areas are supposed to be monitored by policemen on duty in a room allotted by GMC and the health minister, but they are careless.
My enquires earlier with a policeman on duty here in the room revealed his ignorance and he showed me the entrance of GMC where a wounded person had been sleeping for days with no GMC authorities, including security staff, showing any concern in getting the injured man admitted and treated. Is this how useful CCTV camera monitoring is?!
So many CCTVs have been installed on roads to monitor traffic but who takes them seriously? When they go out of order there’s no mechanism to get them working again. Who is going to be appointed to watch CCTV footage of the mortuary where bodies are stacked nude, unless someone is crazy! The equipment will be used to spy on dead bodies, especially young ones. Even if a body is being moved how will anyone at the other end of the camera know whether a body is being tagged properly and correctly?
It is better to have proper procedures in place, strict instructions for those involved in morgue duties to keep records up to date and without errors, like those committed in the Januz Gonsalves case. There should be regular surprise checks and audits. CCTV cameras can only help identify who were involved if there is an enquiry later. That’s of little consolation to bereaved family who have lost their last chance to say goodbye to their loved one.
Shame on whoever wants to use the Januz case to make money!
— Stephen Dias, Dona Paula

STREET PROVIDENCE
All of Goa is abuzz with the case of the missing body of young footballer Januz Gonsalves of Aldona. Aldona people are seething with rage at the criminal negligence and carelessness at the GMC’s morgue by wrongly cremating his body on the eve of the family funeral. Many Goans are demanding the resignation of Health Minister Vishwajit Rane.
We cannot undo the criminal negligence but we can ensure that such incidents don’t occur again. This can be achieved by reducing the number of unclaimed bodies. Our Street Providence Trust Goa has a solution.
We at Street Providence Trust housesthe homeless and offer shelter to people sleeping on roadside, with homes spread all over Goa with a capacity to accommodate 250 people. We give these homeless people shelter, food, medical treatment, medicine and rehabilitate them.
The Central government has a scheme called Shelter for Urban Homeless (SUH). The health secretary of Goa is on the committee and the chief secretary is the chairperson. Recently, the government was fined Rs 1 lakh rupees by the Supreme Court for not implementing this scheme.
We at Street Providence are ready to accommodate all the homeless if the Goa government permits us to be part of the scheme and recognizes our services as the only trust in Goa picking up and rehabilitating homeless street people.
This is how we can help: We are ready to identify, pick up and shelter in our homes more than 50 homeless people per month from all government hospitals through our volunteers and through government doctors’ recommendation. The budget is already allocated by SC/Central government through the Urban Homeless Scheme. The state just needs to implement it.
Our application is submitted to Health Minister Viswajit Rane requesting that we be recognized for our services in picking up and rehabilitating homeless street people and those discharged from GMC but who have nowhere to go. He needs to instruct FSSAI/FDA Goa to request all big hotels, caterers, etc, to support our food bank program by giving us their excess food to feed the homeless with us.
Homeless street people might currently account for 25% to 40% (based on my study and understanding) of the capacity of the morgue once they die. If we are a part of the scheme, upon the demise of any of our residents, either cremation or burial will be done by us once formalities are completed. Alternatively, the body may be handed over to Goa Police to assist and do the needful. In this way the GMC morgue would not be overloaded as cremation or burial will be done within 24 hours with dignity and respect.
The only person who can make this happen is Goa’s Health Minister Vishwajit Rane, he can help the homeless live a life of dignity and die a peaceful death. Their bodies need not be unattended in the GMC morgue for want of claimants to the body. We hope he will hear our pleas and decide to help us sort out this situation.
— Donald Fernandes, Goa
(Ph.8380097564/7020314848)

GOVERNMENT HYPOCRISY
AAM Aurat Admi Against Gambling strongly objects to the government giving extension to casinos for another six months. The tokenism of closing casinos on Oct 2 and then extending their licenses to continue operating smacks of hypocrisy. On the 150th Gandhi Jayanti the most appropriate step would have been to clean Goa of these casinos.
Time and again Chief Minister Manohar Parrikar had assured that casinos would be removed but to date he has not honored his commitment and instead allowed them to proliferate. Extension after extension to casinos is a mockery and show total disrespect to people’s concerns.
While the government is quick to take decisions in favour of casinos, the same speed is not seen when it comes to protecting the interests of citizens. Casino culture promotes destitution and criminal behavior and this on the rise in Goa. Till date no official study has been done on the impact of casinos prior to them being installed by the then Congress government and subsequently permitted by the BJP government.
There has been no stock taking and corrective measures taken. The bad policies of government have resulted in new dependency and ill-gotten money by promotion of addictions. This government has failed to provide a clean economy and employment opportunities as dirty money rakes in. Its policies are based on the money the party gets for election fund rather than public good.
Despite several protests and representations in this matter this government is deaf, dumb and blind where casinos are concerned. AAAG strongly condemns the decision to extend licenses of casinos and demands that on the 150th Gandhi Jayanti the government cleans Goa of casinos!
— Sabina Martins, Aam Aurat Admi Against Gambling, Goa

PARRIKAR RETURNS
That’s all what we read. Parrikar returns to the US. Parriker returns to Leelavati. Parrikar returns to the Assembly to expose himself as a patient with pancreatic ailment, for the public.
However the deeper truth is he is in his fourth stage of cancer of the pancreas. Having completed his course of chemotherapy and radiation his recent visit might be to have a transplant of the organ or to be treated by vector therapy.
In the past he returned from Delhi without completing his term as Defence Minister, but completing the issue of Rafaiel planes. The plain truth is he comes to Goa, is made the leader of the party without opposition and is inducted as CM of Goa without being elected to the assembly, despite his party having less seats than the Congress. The Governor did not apply her mind under pressure from the Centre. That was the first return.
Despite all the misdeeds, neither the Opposition leader nor the Congress party rallied as the CM would open his diary and expose them all — from ex-CM Digamber to Michael Lobo, patron saint of Calangute.
How do the Goan people gather their strength to fight the evils of democracy and return Goa to God’s gift of being the paradise of India.
— Rosyta, Kuwait