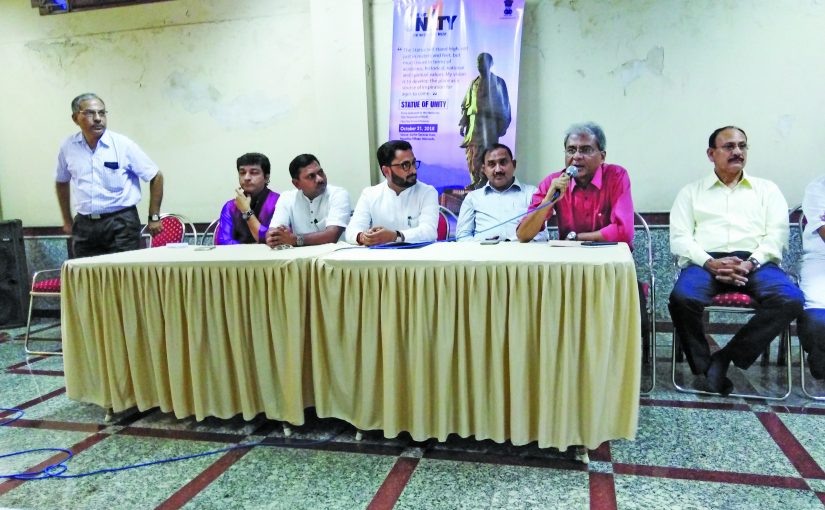 GOA JUNKET: A group of Gujarati politicians were in Panaji last week to woo Goans to visit Gujarat for a dekho of the brand new, heavyweight, Sardar Patel ‘Statue of Unity’ on Sadhu Island, is approximately 3.5 km south of Sardar Sarovar Dam. The statue is a Prime Minister Narendra Modi dream come true!

A group of politicians from Gujarat were in Goa last week to invite their fellow politicians and Goans to attend the grand inauguration of the country’s most mind-blowing statue paying homage to India’s first home minister, Sardar Vallabhbhai Patel, at Sadhu Bet in Narmada district of Gujarat on Oct 31, 2018. Prime Minister Narendra Modi is scheduled to inaugurate it with fanfare amidst an invitee list of reportedly more than 10,000 guests…

Some social-political meets are more irresistible because they take place in temple premises. This one was happening at the Mahalakshmi Temple in Panaji and the press release said a high level delegation of politicians from Gujarat were being felicitated and they would be addressing the Gujarati community in Goa. They were here to invite fellow politicians and Goans to visit what is going to be Gujarat’s newest showpiece — a statue paying homage to India’s first home minister, Sardar Vallabhai Patel.
The high-ranking Gujarati delegation was led by Ishwarbhai Parmar (minister of social justice & Enpowerment) and with him were other Gujarat cabinet ministers like Prabhubhai Vasava (MLA), Hitubhai Kanodia, Rakeshbhai Shah, M R Kothari (IAS), S P Sisodiya (IFS), Y P Rawal (DS) and Vijay Parikh (APS). After the felicitation the delegates briefed media people about the state-of-the-art complex coming up at Sadhu Bet, located about 3.5 km south of the Sardar Sarovar Dam in Kevadia, Narmada district of Gujarat.

From the sound of it this is Prime Minister Narendra Modi’s dream project since 2013 and it is finally being readied for inauguration on Oct 31, 2018, and finally thrown open for visitors. The centrepiece of all eyes at this reported 230 hectares of acquired Adivasi land is the statue of Sardar Vallabhai Patel which soars 182 meters high, twice the height of the world-famous Statue of Liberty in New York.
The statue is being christened Statue of Unity and is set amidst luxurious verdant land to be developed into a state-of-the-art tourist spot. From the sound of it our Statue of Unity is modeled along Statue of Liberty lines — features include high-speed elevators, viewing galleries all around picturesque views of the Vindhyachal, Satpuda hills, the Narmada river and Sardar Sarovar Dam.
According to Ishwarbhai Parmar and his colleagues there all kinds of other add-ons to the Statue of Unity estate, to name a few there is museum, library, research centre (offering some 40,000 documents, 2,000 photographers — all to do with the life and times of India’s independence movement and the role played by “Iron Man” Sardar Patel). A 17 km long “flower valley” is on the larger development plan as also water bodies for boating and presumably, the tribal belt people living in the vicinity will benefit courtesy employment as the sprawling dream complex continues to grow and bloom.
To a query about cost of the statue/project (some may say visionary or adulatory depending on your perspective) an estimate of about `2,232 crore was confirmed and “It is being paid for by the government of Gujarat.” Who has designed it? No names but a team of engineers, architects, designers from abroad and India, which sounded vague enough; names are apparently top secret for the moment because it is still an ongoing project. The immediate statue complex itself is all set to be inaugurated by Prime Minister Modi coming up on October 31.
Additional details are there in a useful booklet which was distributed to reporters. Titled “Sardar of India, Ravjibhai Manibhai Patel,” the text is translated from the original Gujarati by Sudha Mehta, for the inauguration of the “Statue of Unity, World’s Tallest Statue, 182 m, published by the Sardar Vallabhbhai Patel Rashtriya Ekta Trust, Government of Gujarat.
It’s left to be seen if Gujarat’s Statue of Unity at Sadhu Bet becomes as popular a tourist destination as the Statue of Liberty in New York. While the first is dedicated to the memory of an undoubtedly fine gentleman from Gujarat and Gujarati background (Sardar Patel, credited for persuading 562 princely states to come together to forge together one India post-Independence in 1949), the Statue of Liberty is dedicated to an idea — evergreen freedom for all human beings regardless of where they come from, regardless of race, religion, colour, language, education or attire!

Statue of Unity at a glance

The Statue of Unity Project is an iconic, record setting 182-meter tall landmark, planned with the ambition of being the tallest statue in the world. This unique initiative of Gujarat aims at building the world’s tallest structure opposite one of the the biggest dams in the world – the Sardar Sarovar Dam. This memorial built at Sadhu Island, is approximately 3.5 km south of Sardar Sarovar Dam, at Kevadia area in Narmada district of Gujarat.

Project Objectives
As a memorial to Sardar Vallabhbhai Patel, the statue will not only remind every individual of our great nation’s freedom struggle but will also inspire the people of our country to inculcate Sardar Vallabhbhai Patel’s visionary ideologies of unity, patriotism, inclusive growth and good governance. This monument will not just be a mute memorial like the rest, but a fully functional, purpose-serving tribute that will spur all round socio-economic development, in the form of better connectivity, healthcare & education infrastructure, research centre for agriculture development and various tribal development initiatives. The underlying themes and pillars associated with the monument are:
Livelihood Generation
Social Infrastructure
Tribal Development
Employment Generation
Research & Education
Environment Protection

• 182 meters high
• Material used: 17,000 tons of cement, 18,500 tons of steel, plus 6,000 tons of other miscellaneous material. Iron bits and “mitti” has been collected from around the country to go into the designing of the statue
• Cost: `2,232 crore
• Location: Sadhu Bet, 3.5 km south of Sardar Sarovar Dam at Kevadia, Narmada district of Gujarat. Approximately a three-hour road drive from Ahmedabad or Surat.