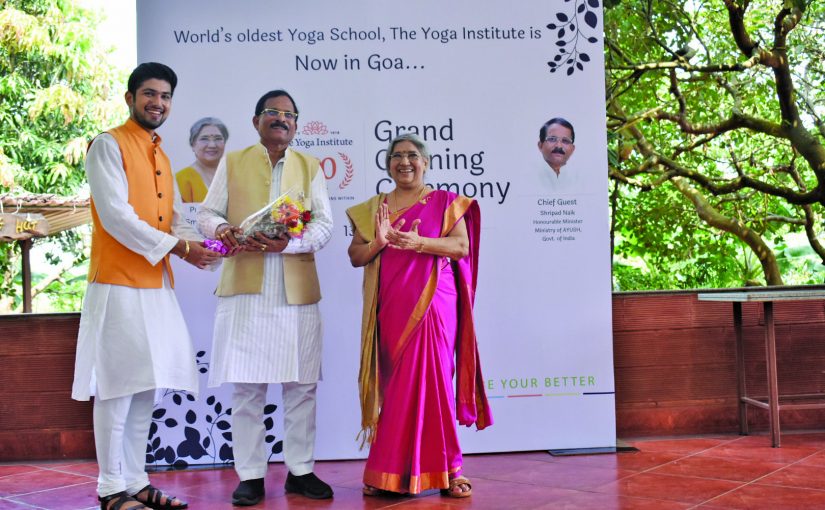 HEALTH: Viva Chorao which will now be ‘The Yoga Institute’s Goa Retreat Center’, was inaugurated by Minister of State for AYUSH Shripad Naik on Oct 13, 2018

Sigh. IT was a press conference I was interested in attending but had to skip regretfully for reasons known best known to me. But I am enormously pleased, my dears, that one of the premier institutes of yoga — the Yoga Institute of Santa Cruz (East) in Mumbai — is now opening a branch on idyllic Chorao island close to Panaji in Goa.
There was a time during my Mumbai-that-was-Bombay years when I’d first got intrigued by yoga and wanted to find out what it was all about, and there is no better place to get introduced to yoga than the Yoga Institute of Santa Cruz which is quite venerable closing in to a centenary now, it claims to be the oldest yoga centre in the world, founded in 1918 by yoga guru Yogendraji (popularly recognized as the father of modern yoga renaissance).
This yoga institute is different from other yoga institutes in the sense that it teaches yoga to the common man and woman in a holistic way. It’s described as yoga for the householder! It just means anyone may pick up yoga in its basics and benefit from it all around. It started off as a family affair and it still is today I think over three generations of yoga teachers the institute has virtually helped transform thousands of ordinary lives, promoting yoga as a do-able lifestyle to gain physically, psychologically, morally and spiritually. Fees for the yoga classes, if I remember right, too were very friendly at least during my visits there!
I remember yoga guru Smt Hansaji or Hansaben married Dr Jayadeva Yogendra (president of the institute), she too hails from a yogic Jain family of Indore… so she fitted it very well at her new home at Yoga Institute. Today she is the director of the institute and undoubtedly the woman who’s paid a key role in the flowering of the institute. It’s good news that it is expanding to Goa and establishing a chapter of yoga at Antonio Salvador Fernandes and Mrs Elizabeth Fernandes (of Saliz & Company) quiet retreat called Viva Chorao on Chorao island. Located on a hillock it is the perfect setting amidst quiet woodsy background where birdsong may be heard all day long. It’s a veritable garden of paradise, this Viva Chorao. The island itself we know is alive with natural agricultural countryside, trickling water and wildlife sanctuary, small population.
The Fernandes family of Saliz & Company dates back to 1969 having earned its fortunes through dint of hard work setting up a weighing machine establishment on Chorao. It is one of your inspirational rags to riches stories if you want to catch up with it and yes, there’s a love story like no other intertwined! Suffice it is to know here that their sublimely located Viva Chorao is now going to be The Yoga Institute’s Goa Retreat Center, inaugurated by none other than Minister of State for AYUSH on Oct 13, 2018.
I do believe that when all else fails there is hope if you explore and practice some yogic sensibility in your day to day life! If you’re asking me my dears, yoga offers a more grounded education than say China’s tai chi or America’s pilates… not that I don’t see any goodness in them too! Tai chi is great, for it’s performed to music indoors or preferably outdoors… if you don’t like yoga you may fall for tai chi! Fall for both if you can.
Incidentally, I’d gone out for a marriage party many moons ago at Viva Chorao and remember it vividly as a timeless place going uphill in layers of orchard land with inviting infinity pool, sit-outs, deck areas to meditate in silence. In its new avatar it is now all set to offer yoga classes, camps, including an internationally recognized QCI and Yoga Alliance Teacher Training Yoga course of 200 hours…may be one of these days I’ll attend a weekend yoga retreat camp to find out how much I’ve forgotten my yoga! At my green salad years I could do the surya namaskar discipline and sit in vajrasan pose but can’t do it any more (too much osteoarthritis at the knees).
You may laugh but I do believe it helps to switch off life’s stresses regularly and mind one’s mind and body, heart and soul, in good times and bad times! A bit of yoga is of invaluable help when face to face with ground realities…don’t take my word for it. Check it out.
On that note it’s avjo, poiteverem, selamat datang, au revoir, arrivedecci and vachun yeta here for now.

Note on Chorao Island
Do you know that Goa’s Chorao island — largest of the 17 islands located in the estuary delta watery areas of the Mandovi river — has an interesting history? It’s ancient name was Chudamani which later metamorphosed to Choddnnem or shortened to Chodan during the Portuguese colonial years; it was also Chorao or Ilha dos Fidalgos (island of wealthy Portuguese noblemen). Mythological history has it that the original Chudamani is rooted in a legend in which Yashoda maiya of Lord Krishna lost or flung her diamond earrings here on Chorao island. The island retains its natural green and sylvan beauty more or less even if the river and its tributaries are silting up. Tourists visit for its Portuguese time churches, graveyards, vintage homes set in small villages with a population of 6,000 something. The island is accessible by ferry boat from Ribandar. Chorao is now also famous internationally for a large part of it has been conserved as the Salim Ali Bird Sanctuary. Some notable folk also hail from Chorao island but you may Google and enlighten yourself much more about this lovely island still lost in the mists of time and history.