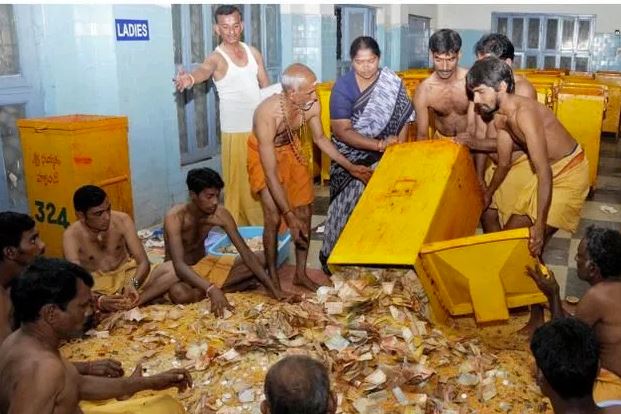 CAPTION: Just as temple collection boxes provide an easy and available source of funds, for the government, corporations like the EDC can be used and misused as a source of funds and to ‘reward’ adherents

And a few stray thoughts on the continued concerns over the health of the Chief Minister Manohar Parrikar.
Whether or not we go by the version of Rohan Khaunte, who claims that Parrikar actively participated at the half hour meeting of the Investment Promotion Board (IPB), it is clear from the picture released that he is not fit to preside over the state.
Indeed, doctors I met this morning claimed that the photograph was a staged photo op, and the chief minister could sit only for a few minutes. What is clear is that the chief minister is in no condition to continue in his position, let alone handle the 30 portfolios that he holds. There has been no governance of any sort for the last nine months since the chief minister took ill. As it is explained in detail in our cover story no State can function without the chief minister for even 24 hours, let alone nine months. The chief minister, like the prime minister and the president, are top government officials whose permission is needed to implement any policy or programme.
Finally, after months of speculation, Health Minister Vishwajit Rane admitted that the chief minister has pancreatic cancer. This has been confirmed by BJP State president Vinay Tendulkar. For the last nine months this very serious medical condition of the chief minister has been cloaked in a veil of secrecy, with both doctors and the party only admitting that he had a pancreatic ‘ailment’ — giving the impression that he had just a minor problem and not pancreatic cancer which is the second largest killer in the world, second only to breast cancer.
The curious part is that Parrikar’s party colleagues at the Centre, who hold very senior positions, have been quite transparent about the state of their health. Finance Minister Arun Jaitley, for instance, not only admitted that he had a kidney transplant, but took leave for three months so that he could get enough rest after the transplant. Even now the Jaitley has his room insulated and talks to his officials via teleconferencing to avoid infection. Similarly another senior BJP leader and member of the Cabinet, Anand Kumar, admitted to having cancer and after prolonged treatment in London has returned to Bangalore where he is continuing treatment. Minister for External Affairs Sushma Swaraj has announced that she will not be contesting the 2019 parliamentary election because she has also had a kidney transplant.
Under the circumstances we fail to understand why there is so much secrecy over the health of the chief minister. A single picture of his addressing the IPB gives no indication of his actual state of his health. Logically there should be regular bulletins issued on the state of his health so that his colleagues and the people of Goa can decided whether he is capable of fulfilling his responsibilities as chief minister. IT Minister Rohan Khaunte has been frank enough to admit that he does not think the chief minister will be back in the secretariat to work full time in the near future.
Parrikar owes it to Goa and Goans to stop down permanently or temporarily and nominate a substitute to carry on his responsibilities until he is completely fit. Particularly because besides being chief minister he holds the Finance and Law and Order (commonly referred to as Home) portfolios.

And a few stray thoughts on the Electricity Department suffering from an acute shortage of not only top officials but even linesmen.
New Power Minister Nilesh Cabral has revealed that the Power Department does not have either a chief engineer or superintendent engineers who are the second-most senior officials. Most of the posts of executive engineers are occupied by diploma holders — thought the rules do not permit them to do so. There is tussle going on between the diploma holders and the degree holders.
The problems of the Power Department go back to the pre-Liberation days. Power distribution was through generators for the top Portuguese officials in the state as Goa did not have a power generation facility. In fact Goa still does not have a capital power generation facility. After Goa was liberated it started getting its requirement of power from the national power grid.
Though power was now available to provide electricity for the entire population and not just for the ruling class there were no manpower to manage the power distribution system. During the Portuguese colonial regime there were no engineering colleges, polytechnics or even industrial training institutes. The only professional college was the GMC which was set up for the benefit of the Portuguese army in its African colonies and not for the benefit of Goans. Which is why migrants from Kerala, Karnataka and Maharashtra were recruited in large numbers for meeting the manpower requirements of the Electricity Department.
The electrical engineers did not show much interest and it was primarily diploma holders who applied. The than government of Goa has no choice but to appoint them to the post of junior engineer and over the period of time they were promoted to the rank of assistant engineer. Even though diploma holders are not promoted to the position of executive engineers, the rules were changed to meet the acute shortage of staff. The problem remains of filling the top positions of chief electrical engineer and four superintending engineers who are all acting in their post and are yet to been confirmed.
One can understand the difficulty filling the posts of electrical engineers before Liberations as there no were engineering colleges. The Government Engineering College is now 50 years old and must have produced enough electrical engineers to meet the requirement of the Electricity Department many times over. Now there are five engineering colleges and so the Electricity Department should not have problems getting graduate engineers to fill up all vacancies. We cannot help wondering whether the posts are not filled because the engineers are not willing, or cannot afford, to pay the bribes being demanded.

And a last stray thought on the small and medium scale industries being the worst affected by the highway robbery of banks by big industrialists.
Banks not only lent money based only on personal guarantees, but chased the very rich offering loans. This includes the Vijay Mallyas and the Nirav Modis and the Neeraj Singals and the Dhoots who manufacture Videocon TV sets, not to mention Anil Ambani and the biggest defaulter of them all — IL&FS, the government infrastructure giant which owes `1,900 crore.
But small and medium units which wanted loans of a few crore or lakhs were denied loans on flimsy grounds and asked to produce all kinds of sureties. Goan Observer is an example of a small company which is a victim of the banks.
With small companies the problems is cash flow. You may get orders for your product and it may happen with the majority of the small and medium companies in the various industrials states. But there may be a huge delay in payment. In the meanwhile the industries have to meet their raw material costs and other fixed costs including salaries. When they approach a bank for even over drafts they are asked for unreasonable security.
After the arrest of the top management of the Punjab National Bank in the Nirav Modi scam, and even the resignation and continued investigation of Chanda Kochhar, CEO of ICICI, the largest private sector bank, public sector banks in particular have become very tight fisted. The banks which were so generous in extending loans to the big sharks are refusing to lend to anybody as they are afraid of getting arrested.
Small and medium sized companies have also been hit by the falling rupee as part of the production depends on import of raw materials. It is important that the government should come to the rescue of small and medium companies who provide the maximum employment in the State.