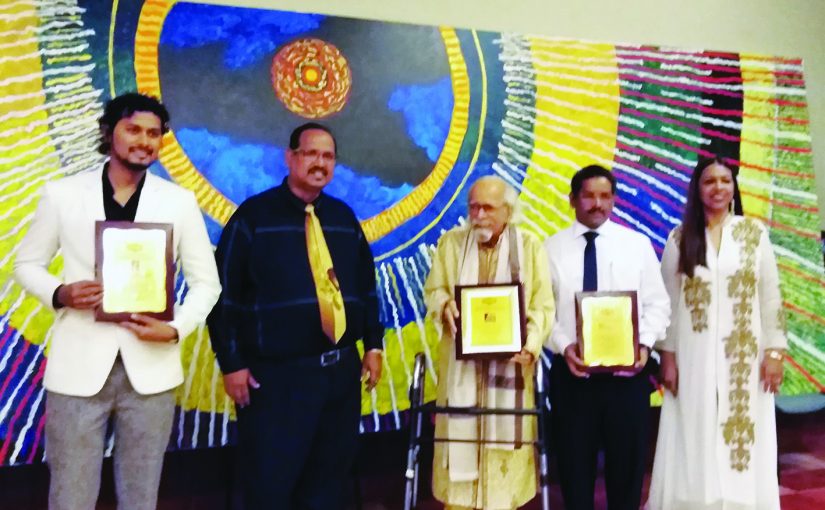 At the Spandan Global Art & Cultural Foundation’s 5th anniversary celebration: It was 92-year-old Goan artist Laxman Pai who was the cynosure of all eyes as he accepted Spandan national socio award from Governor Mridula Sinha at a function held on Sunday, Oct 26, 2018, at the Institute Braganza Menezes in Panaji. Picture shows him posing after the function with other awardees against a gloriously colorful backdrop painted by him! In the picture are actor Kevin D’Mello, Cesar D’Mello, Laxman Pai, Gurudas Pilarnker and art collector Shaistah Thapar. The Spandan Artbeat magazine was also released on the occasion which was sponsored by philanthropist Anant Vikas.

THE BJP leaders (including coalition leaders from MGP and GFP) are currently coming out with different versions or statements regarding health of Chief Minister Manohar Parrikar with the sole intention of holding on to their hot money-making chairs/seats for some more months! They all know that Mr Parrikar is suffering from serious pancreatic cancer since the last so many months but they still refusing a new CM because they know the government will collapse.
They are trying to fool Goans by showing that all is well although the government is currently an ICU sinking ship in Goa. They don’t want dissolution of the Legislative Assembly because most of them have no guts to go to voters for fear of a backlash even from their supporters, due to all the backstabbing after the last Assembly elections.
When most government servant stay at home for a day or two they are told to submit a leave form to their department head. But Mr Parrikar may bunk work for months without submitting a single leave form! Is CM above the law? Why should public money be spent on sending sick politicians abroad for medical treatment? This CM has openly fast tracked the destruction of Goa over the years and tried to cancel St Fancis Xavier and Good Friday holidays to toe the line of RSS bosses.
Now BJP leaders are mischievously telling Goans that Mr Parrikar is seriously ill but successfully chaired the Investment Promotion Board Meeting, a Cabinet meeting at his residence at Dona Paula, recently, and cleared six items on the agenda. Can a sensible person ever imagine an ill politician functioning like a Superman? Goa has become a defunct, paralyzed government under the leadership of sick politicians just to keep the government going to help power-hungry ministers make fast money for some more months.
Governor Mridula Sinha should put an end to this political tamasha and dissolve the Legislative Assembly and send the state for mid-term polls at the very earliest to check politicians betraying the trust of Goans. Let people of Goa speak in one loud voice during election day!
— Jerry Fernandes, Saligao

BEWARE PALM OIL
I am working as a medical director for a pharmaceutical company. I would like to make a small request to you. Before that I would like to share some information. Many of you might have read in the newspapers that EMRI results say majority of people having heart attack are less than 50 years old. You will be surprised to know the culprit is palm oil.
It is far, far more dangerous than alcohol or cigarette smoking. India is the largest importer of palm oil in the world. The palm oil mafia is very strong. But our children are big risk. There is no fast food available in this country without palm oil in it. Even big companies like Lays use a different oil in western countries but it is palm oil in India just because it is cheap.
Each time we or our children eat a product with palm oil in it the brain behaves inappropriately and signals for secretion of fat around the heart. This leads to diabetes at a very young heart. World Economic Forum has projected that 50 percent of people who die at young age will die of diabetes and heart disease. The palm oil mafia has made our children addicted to junk food, leaving fruit and vegetables which are heart protective.
Next you time you buy something see the label. If it says palm oil palmolenic or palmitic acid, do not buy it. We have written to the prime minister and a lakh of doctors across the country to take some action to secure our future generation. Our children should stay away from palm oil containing products in the market place.
— Dr Srinivas, Goa.

‘SMART’ CITY BUT MISMANAGED FUNDS
Panjim is a city of chaos and of desperate people and it is the worst city of Goa — even worse than Margao, Mapusa and Ponda.
From day one, I was involved as Panjimite and therefore stake holder in the Smart City programme/mission.
We attended and raised queries and objections at several meetings at CCP hall, Fidalgo hotel, Patto and other prominent places. Inspite of our objections, the GSIDC went ahead despite the fact that ex-Mayor Surendra Furtado and some councillors did not attend the meetings.
Sidharth Kuncalienker and IPSCL MD Swayan Chaudhuri took up the project of Smart City Mission although their appearance into public domain came later. I am still sure that at this point of time this city is not in position to reach its goal.
I reiterate and advise all those involved in this huge project, where public exchequer funds are at stake, to hold off on fancy measures when basic infrastructure, like drainage, roads, and waste disposal is not in place.
It is prudent for me to mention here that top beaurocrats, both from the government as well as GSIDC, should have first-hand information about Smart Cities abroad that they are dreaming about. Those are built up on infrastructure and do not have the existing drawbacks present in our city of Panjim.
I believe there is no necessity to take up this project that Sidharth is pursuing so rigorously when the Chief Minister, due to his illness, is unable to monitor the wastage of funds.
— Stephen Dias, Dona Paula

NRI & RTI IMBROGLIO
Non-resident Indians or NRIs can file RTI applications to seek governance-related information, the government has said, correcting its earlier stand. In response to a query in Lok Sabha, Minister of State for Personnel, Public Grievances & Pensions Jitendra Singh had on Aug 8, 2018, said NRIs were not eligible to file applications under the Right to Information (RTI Act).
The ministry corrected its stand after activist Commodore (retired) Lokesh Batra wrote to it pointing out that the transparency act allows every Indian to seek information. The ministry in its previous response had said, “Only citizens of Indian have the right to seek information under the provisions of the Right to Information Act, 2005. Non-Resident Indians are not eligible to file RTI applications.” The corrected response has been uploaded on the Lok Sabha website.
— Avertano Miranda, Goa