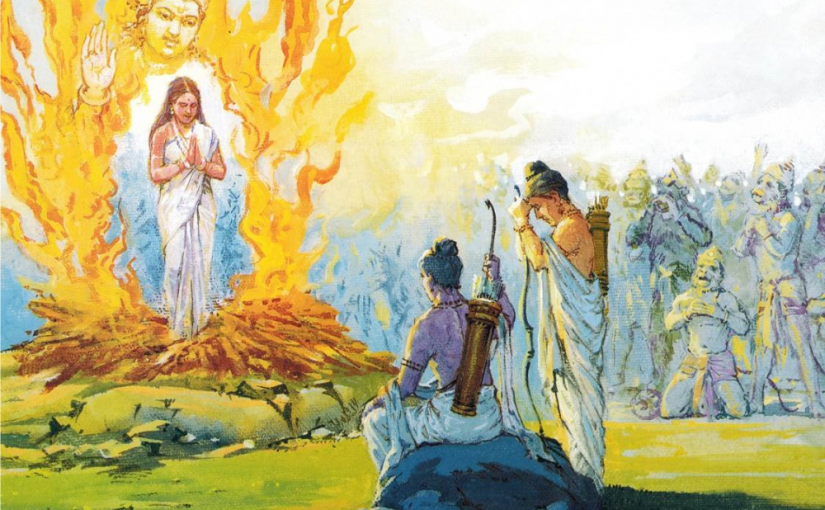 NEW VISION: It’s easy to read the Ramayana and see Sita as the victim, yet her final act of choosing to return to the Earth is an inspiring path for those tired of following society’s mores and hoping to be true to themselves

Sita was the biggest victim of the Ramayan war. While Ram came back victorious after liberating Sita he forced his wife to undergo Agni Pariksha despite knowing that she was epitome of womanhood. Ram ruled but Sita, unable to bear the humiliation, chose to return to her mother Earth.

Joseph Campbell referred to myth as the “literature of the spirit,” To me, what Campbell is getting at is that we tend to err when we understand stories — myths — as outer realities, as things that happened externally. But the myth is about our interior, the inner self, and when we read a myth, when we experience it, we can be transfigured.
How does this apply to the Ramayana and Sita? I grew up angry with the Ramayana, feeling dispossessed by an epic that featured imprisoned women, mutilated women, and banished wives. But, collectively, as a culture, it seems to me that we are obsessed with the Ramayana. Perhaps even more so than the Mahabharata.
The truth is that our culture has far many other epics to offer us. The last three years I have spent in investigating the Tamil epic Silappatikaram. In the course of that, I discovered many epics that we do not know — the Manimekalai and the Neelakesi are just two examples. But the Ramayana has seized our cultural psyche — we are extorted to be like Ram, to be like Sita. To apply Campbell’s ideas here — we have taken these stories within ourselves, to fashion our own ideas of ourselves.
But to me, the question is: why has this epic captured us? Why are we obsessed with it? Here, in one epic, ideas of the state, kingship and leadership are also related to ideas of gender, good behaviour, and of obedience to families, to elders, to husbands. And to understand how this obedience can also be enacted on the body, note how characters must also subjugate their personal desires to that of the collective. Those who are disobedient are mutilated, like Surpanakha.
What about Sita? She, too, was disobedient — not on the level of Surpanakha. Hers was a minor mistake, born of love and care — she stepped out of the circle drawn by Lakshman. For that “trespass”, for stepping out of the boundaries that were to contain and protect her, she paid a great price — she was seized and imprisoned, she had to submit later to a trial by fire; ultimately, she was abandoned by her husband as her chastity — although proven — was still a matter of doubt.
The message, the subtext that I read here, as a child and even as an adult — is this: give up your desires. Give up even your care that sometimes forces you to step outside your boundaries — and can be transformative — for the sake of obedience. Give up love, give up the ability to be loving, for obedience.
What happens to Sita in the forest?
I can only imagine that by that point, her life has taught her resilience. She is able to endure life in the forest; in fact, she seems to find joy and peace in it. When her husband comes, she does not choose to return to him. In one final act, she is disobedient.
She chooses something else. She leaves behind her marriage, her children, her duties and obligations. As a child, I was uncomfortable with this choice, obviously, for she left her children behind, and I was terrified of being abandoned. But now, as an adult, I see it differently. I see her choosing a self that is larger than the roles and ties she has had in her life. Larger than being a mother, larger than being a wife or a queen.
I see her following the instincts of her heart and her spirit, and choosing a descent into the earth. Another great sage in the Ramayana, Vishwamitra, sought an upward ascent when he tried to send Trishanku to the heavens. Sita’s act is the reverse of that, it is a downward motion.
As I write this, I am 34. Perhaps, I am the same age, or close to the age that Sita was when she made the decision to descend into Earth. Unlike her, I have never been married, nor had any children. This troubles me. There is a great safety, security in marriage and the idea of children — that one will not face the future, alone, lonely, desolate.
Sita’s descent strikes me as something difficult — terrifying even. What lies underneath the earth? Would it be dark? We believe she returns to the bosom of her mother but it is also, in a larger sense, the great mother of us all, the great mother goddess — unknowable, enormously powerful, dark.
But at this moment, more than any other moment of the Ramayana — I find the resonance that Campbell urges us to look for in myth, the resonance that can transform my spirit. Ultimately, through hardship and difficulty, Sita survives. She has resilience. She has been punished for stepping outside her boundaries, but she has also been transfigured. She discovers a self that is more than a princess, more than a queen, a far larger inheritance as the daughter of the earth. Sita finally is neither a princess or a queen, but more than either.
I think there is something else that I can take away from here. For me, the future, at times, is full of fear. Unknowable, like the dark depths of the earth. Many today have chosen to not be defined by our relationships but to seek our own true selves and our own destinies. Yet, that has come at a cost.
Our small acts of rebellion question and challenge the established systems and institutions of society. We have endured great struggle and now face an unknowable, uncontrollable future. In this, Sita can inspire us: To step fearlessly forward, into the darkness. And to find the space of true freedom, a self-eternal and separate, defined not by gender roles or society or expectations. That is true liberation.