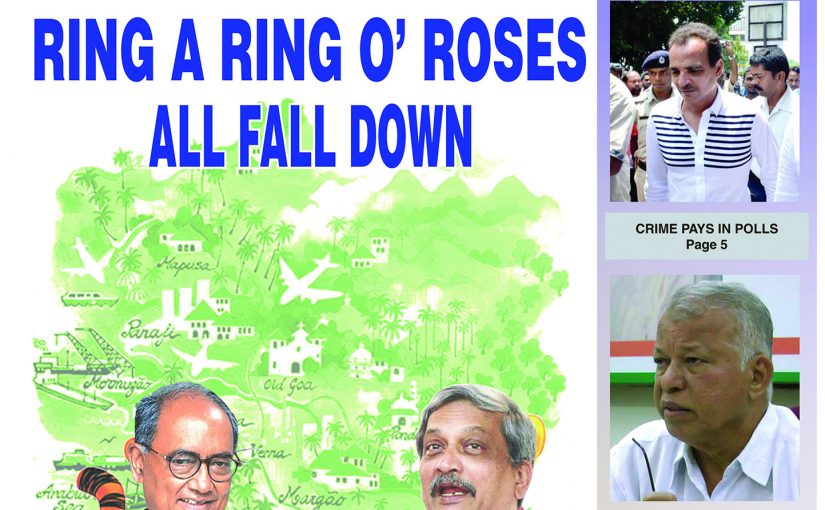 ONE may never tell with life. When it will take a dip to shut you down or take a turn upwards to lift you up! As publisher of the political weekly, the Goan Observer, which turns all of 15 years on November 15, 2018, I can summon up a smile. The weekly is as much Rajan Narayan’s baby as mine, but more his! We’ve never seen so many tumultuous ups and downs as we have in the last two years, when every other month the thought of closure would come but it was not to be entertained.
The truth is also that we cannot afford to close down. There have always been these handful of friends, who I hope believe more than anything else in upholding the voice of dissent under duress, and whenever we asked they obliged with full page or half page or quarter page advertisements. Some advertisers have been with us right from the beginning and I know will be there for us till the end if and when it comes.
Funny, sometimes we don’t even ask and an advertisement comes along from a long lost friend or well-wisher to rescue us for that month at least. But once after waxing lyrical over a collection of Chinese ceramics in a full page write-up in the Goan Observer, I tentatively asked the entrepreneur ­— a lovely woman — if she would like to support us with an advertisement? She snapped, “I won’t give you one naya paisa!” I wondered what I had done to make her so angry! If you praise some venture can you make somebody angry? I guess so although it was a first time for me and I’m still musing about it with regret.
Hey, it is the usual thing for most media marketing people to touch whoever they can for an occasional advertisement, if not something on a regular steady supportive basis…quite simple there must be something about this paper they love or agree with! We’re not the best looking paper with lots of razzmatazz colour in a many-paged fat tabloid say like the Mumbai Mirror or Mid-Day in Bombay-which-has-become-Mumbai (I wish we could be of course!).
Alas, our small returns permit us to be only a lean and mean 24-page weekly, out of which six to seven pages are taken up by lottery result pages (an example of steady advertising support courtesy someone who is an old admirer of the editor and who obviously appreciates the raison d’être of opposition politics in a democracy).
Life is not so simple that we should see one side of a situation all the time; there is always room to see the other side, the side seen less and the side most of us who are more fortunate would rather forget. Over the years in this business I have learned that most tragedies are rooted in presumption and assumption rather than hard facts. For example, you have not given anyone any reason to be an enemy — but on the supposition that you will harm them, they will harm you first! Imagine the stress of living with such a mindset?
NEVERTHELESS, I will say life has been good to us even if we are and will always be small media battling constantly to walk uphill with dignity. We have not become rich, we continue to barely sustain ourselves modestly with a few pinches and tucks here and there. This time last year I thought it was the pits; but same time, same month, this year, I’m saying we are still here, alive and kicking, achhe din will come for the Goan Observer…never mind that the editor is on his knees communicating a grim message which is ringing true all around.
We are not the only ones suffering. Small print media everywhere is feeling the burn for want of advertising and goodwill support and once again the price of newsprint has been hiked (the morning dailies have already hiked their price from `5 to `7). They have more staying power with the kind of money they’ve collected through a long history of being around and wheeler-dealing perhaps.
And, of course, more and more young folk, the below 30 years generation, prefer to catch up with news, views, entertainment and what not on their smart, smarter and smartest cell phones. Television is passé, they want a full LED screen covering an entire wall in their bedroom. Say what you like about digital technology taking over our lives but I still think the magnetic radiation which we imbibe wittingly and unwittingly …will take a toll on the birds and bees who too make Mother Earth their home. We are just not educated enough to realize that it is time to take stock of our mega destructive concretised lifestyles.
I do believe the world will return to reading the old-fashioned way in black and white to stay alive and kicking! If the mind stops staying alive and kicking, who survives? The challenge surely is to achieve a balance of harmony with the technological revolutions all around — who goes for a toss in a future of extremities?
To stay with the fluctuating fortunes of the Goan Observer all I want to say here is lately we have agreed to stop thinking in the best sense of the word and just go with the flow. Continue to stay alive and kicking as long as we can, as best as we can, make some sacrifices when required in the material department, pay our dues…and continue to pray that one of these days an enlightened venture capitalist or angel investor will come along and give the Goan Observer an opportunity to grow wings and fly.
What saddens me is that a few did come to check out how honourable our audited accounts are and after finding out everything about us, they just cluck clucked wondering how we are still alive at the bottom of the barrel with our FDs liquidated one by one? None had the gumption to come aboard determined to contribute in cash or in kind…when they realized there was no fancy salary to earn, nor could they exploit the weekly to rake in money for weekly or for themselves, they bid an impromptu goodbye. They also spread the rumour that it is not easy to kick Rajan Narayan out of his own weekly with ease even if he says he wants to retire all the time!
Some of it is true. As publisher of the Goan Observer and the editor’s wife I would dearly like him to hand over the reins of the weekly to someone younger who will take cognizance of the weekly’s vulnerabilities in its best interests, who can breathe new life into it, resuscitate it, keeping in mind its central brief of staying alive and kicking for a cardinal cause of the Fourth Estate – keeping political dissent alive. It’s an idea going beyond self-aggrandizement and egoistic dilemmas surely?
Someone did say, “We’ll give you `10 lakhs for just the title of the weekly, what we do with it afterwards is none of your business!” Rajan Narayan didn’t have the heart to say okay for reasons only he knows and which I am not going to question. So we are 15 going on 16 years and we’re still alive and kicking this November 15, 2018, and it is said battles may be lost but there is always the war to win.
One of these days I am sure we will find different players to play different battles, but the war will be the same…this war is always about victory of good over evil. May good always survive, may evil always perish. Wishing all our readers and supporters a happy Deepavali and a soul-searching season which stretches right up to Christmas, New Year and 2019! We will be here, right here or somewhere else better.