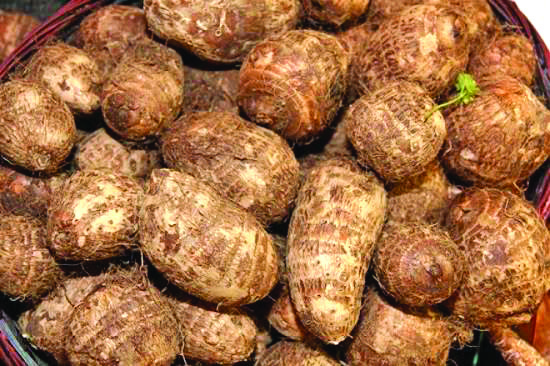 ARBI: The humble arbi is quite an aristocrat now! It offers leaves, corms, stem, for turning out some traditional recipes. Native to India but marginalised by come lately phoren potatoes! In most Hindu homes in Maharashtra, Goa and Gujarat alu vadi is still a much loved breakfast or teatime or any time treat! Arbi makes for superlative finger food, can replace French potatoes fries any day

THE hubby who has for some time now been pining to eat arbi for reasons best known to him sms-ed me one evening while I was out, “I am at Latitude at the Taj Vivanta and there is a chef here making me the best arbi …join me if you want!” For some time now he had been asking me to make arbi (in Hindi also arvi) for him at home, dry-style or gravy-style, but my every attempt flopped! For some reason the arbi would stay scratchy on the palate…and I would chuck the flopped veggie. May be I didn’t try hard enough or my heart wasn’t in cooking arbi!
I mean who wants to take an interest in these dumpy purplish brown arbi corms when there is broccoli, baby Chinese greens, fresh dill and other veggies to take a shine to! Anyway, there I was back with arbi and about to change my mind about the charms of the curiously nondescript imperfect nuggets of the veggie. Most times folk do arbi dry style or kappam style to serve as finger food, and I know a friend who says boiled and mashed arbi makes for a great smoothie, a vegan replacement for dairy milk.
What is arbi or arvi? Also called colocasia or taro and both leaves, corms and tuber are edible. The plant has these large green heart-shaped leaves which go into making alu-vadi in Maharashtra and Goa, patra we call it in Gujarati. The leaves may be the tender green variety found growing wild in watery marshy areas and once upon a time I remember my mother would just ask the milkman who did delivery to get some “arbi-na-patta” and the next morning would arrive a bundle of leaves free with a smile although of course mother would make up for it in some other ways if the man refused to take cash.
The leaves are wiped clean with a wet cloth, thick stems trimmed away and then a flavourful thick spiced-up batter of gram flour, haldi, dhani-jeera, thyme seeds, jaggery, tamarind, salt to taste…would be smeared on the leaves one on top of another to form a layer which would then be rolled, tucked in neatly and steam cooked to melting softness. Slice hot, hot and eat dipped in cold pressed sesame seed oil, my style!
Most homes would insist on a phodni in hot oil, in which would go mustard seeds, sesame seeds, curry leaves, a dry red chili or two, hing…let sizzle and before it burns remove and drizzle the mix over the cut alu-vadi. Toss, garnish with chopped green coriander leaves, and serve. Alu-vadi or patra make a pretty picture for tea-time during the weekend or for breakfast the next day if there is any left over (re-heat though). I also remember putting fat cuts of garlic in the phodni and it made all the difference in superlative flavours.
BUT back to where I started, we’re talking of arbi sabzi makhani-style at the Latitude at Taj Vivanta and once savoured can never be forgotten. Chef Vikram Puri Goswami (popularly “maharaj” by the rest of the kitchen folk) has been with the Taj hotels for many seasons and he confided that they’re forever eating arbi out in UP-Bihar where the recipe I mentioned earlier is called “patode.”
They do have a Tali Kurma Arbi listed on restaurant menu but that’s more like an appetizer and what he had made for the hubby is a different recipe with the arbi in rich makhani gravy. I asked about arbi scratchiness and he educated, “To get rid of the scratchiness of arbi I first boil them, peel them, deep fry them lightly, before introducing them into the makhani gravy with lots of cream… it’s the frying which eases out the last itch from arbi.” You feast on the arbi sabzi with hot phulka, roasted papad on the side.
I must confess the Latitude arbi sabzi is the best I’ve come across and yes, hurrah, I’ve finally found my favourite place for dahivada too! These days I’m looking for dahivada everywhere for love or for money….then I saw it on the menu at Latitude and ordered. An astonishingly large bowl full of dahivada floating in seasoned curd was put before me and I was zapped, such a bounty of dahivada. Can I eat them all?! But then one may always feast as much as one wants and do a take away with the rest, pop in the fridge at home and relish the next day. I forgot to take a picture of the dahivada but must do so the next time, the scattering of bright red chili powder atop the dish didn’t spice up the dahivada at all, so it must be very good quality fresh Kashmiri chili with just a wee fire in it.
Well, this is to say I’ve found my favourite place for dahivada and the hubby for arbi! Out of curiosity I googled a bit and discovered interesting tidbits about arbi, would you believe it? It is really a far more interesting root veggie than I thought. This colocasia esculenta is thousands of years old on earth, a tropical plant native to south India, Malaysia… found most everywhere today. It’s of the Araceae family and leaves, corms, root stem are used in an array of seductive preparations. In the USA I think they’re called eddoes and probably feature in American African cuisines. This is to say arbi is one of our power veggies and all kinds of good things.
For one thing it is magnesium rich and magnesium is what helps prevent electrolyte imbalance and keep blood pressure in check. The body loves lots of magnesium in one’s eating habits! Say it is a good carb veggie with fibre and other mineral and vitamin values, better to eat arbi with its slight glutinous texture than potato! Which reminds me the arbi was always with us while the potato was introduced by the colonial Dutch to the Philippines in the 16th century and later it came to India by late 18th century…no need to be so crazy about potatoes then.
Okay, I’m going to master the art of cooking arbi at home! A Sindhi friend of mine makes something exciting called “arbi tuk” (peel arbi, steam cook, squash patty style and deep fry golden brown…sprinkle on chaat masala atop the tuk and serve on a bed of greens. If Chef Goswami sends me his recipe for arbi sabzi I’ll share it here next week (keep watching this space).
WHILE talking of the Taj Vivanta I must salute the Taj hotels for being most eco-friendly at least at catering events. Even at Lattitude I noticed water is poured into glass (no unsightly branded pet water bottles on table). Whenever I’ve been at events where the Taj is catering, like the IT conference some time back or the AYUSH conference recently…I’ve appreciated the turnout of meals on these pleasantly natural biodegradable betel leaf platters, bowls, even spoons. All hotels and restaurants should follow suit voluntarily!
Currently, the manner in which so much food is served or packed away in itsy bitsy flimsy plastic ware — no matter how imaginatively designed — is deplorable in our enlightened times surely? I asked Jerry Trinidade of the Taj Vivante if it was more cost-effective using the betal leaf ware and he said it was. They’re not using and chucking plastics so much anymore and all the come-lately eco-friendly leafy ware is a real boon, they may also be designed to order if one wishes…they usually order it in bulk from a manufacturer in Mumbai. It now plays a vital role while they’re executing catering orders at various venues for functions, parties or events.
This is not to say there is no usage of plastics in government junkets. But I’m all for not patronizing them in all the small and big ways we can… in the interests of restoring dignity to Mother Earth who feeds us all innocent or vile.