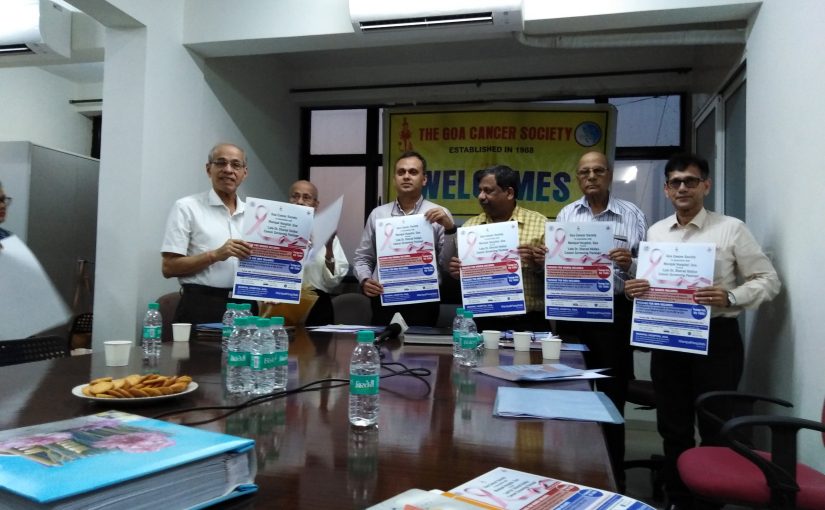 GOA CANCER SOCIETY AGM: The new office bearers stand proud at the forefront of the fight against cancer

IT was the 30th Annual General Meeting of the Goa Cancer Society on Oct 31, 2018, and one with a difference. Honorary President Shrinivas Dempo reflected a little sentimentally about the society’s 1968 establishment and long history. He rued the fact that although the society had 3,500 members on its registry it was difficult to contact all of them.
He was addressing a press conference after the AGM and said that many good things have been happening the last four years when the GCS has been focusing on upgrading itself and one may see this in black and white in the published annual report 2017-18 of the society, which is available to all members and anyone interested in knowing more about the activities of the Goa Cancer Society.
While announcing benefits for members of the society like the Dr Sharad Vaidya cancer package of 15 percent on billing at the Manipal Hospital, he also said they had been funding an important activity like research in cancer and funding up to `5 lakh is available for research in cancer. He cited the 1916-17 project of “The Expression of a-SMA & CD-163 in Oral Squamous Cell Carcinoma: As Predictors of Tumor Aggressiveness” by Dr Anupama Mukherjee of the Goa Dental College. The society has also organized several breast cancer screening camps and talks on the subject of cancer to educate the lay public on how to recognize early signs of what could be cancer and not to ignore them.
The society has also been helping cancer patients in need of finance and in the last financial year ending February/March they had registered 290 patients who had availed of the scheme, 194 women and 96 men. Altogether, concluded Mr Shrinivas Dempo, the GCS has spent `38 lakh on subsidizing cancer patients and on other cancer related projects.
Oncologist Dr Shekhar Salkar, GCS’s honorary joint-secretary, revealed that “1,300 cases of cancer are detected annually in Goa and with the rate being 97 per lakh population Goa is on par with states like Bihar when it comes to cancer. Goa has more breast, colon and lung cancer. Lung and breast cancer is more prominent in women than men…”
The GCS also signed an agreement with the IMA Ponda Charitable Trust on May 12, 1016, to aid the Dilasa Centre for Terminally Ill in Ponda. A corpus donation of `20 lakh has made against sponsoring various dormitory rooms for the care of terminally ill cancer patients. It is a project still in the stages of being fine-tuned, according to GCS committee member Dr Ghanekar.

(Note: The Goa Cancer Society was founded at the Swami Vivekananda Hall on Oct 28, 1968. It registered as an independent charity in 1969 under the Societies Registration Act. It is a voluntary non-profit organization dedicated to aiding cancer patients and fulfilling commitments in the worldwide fight against cancer. Dayanand B Bandodkar, the first chief minister of Goa, Daman and Diu, is the founder chairperson of the society; then vice-president of India Dr G S Pathak laid the foundation stone at the first building on January 1, 1972, and S K Banerjee, (then Lt Governor of Goa) unveiled the plaque of the corner stone of the Goa Cancer Society Hospital open to the public on May 22, 1977. In 1992 the GCS went into collaboration with the Manipal Hospital (Goa) by entering into a long term lease with it. A turning point for the society was when in 2000 industrialist and philanthropist Shrinivas Dempo of the Dempo Group of companies was elected president and under his leadership and guidance the GCS broadened its aspirations towards supporting various cancer-related activities including offering financial aid to needy cancer patients.)