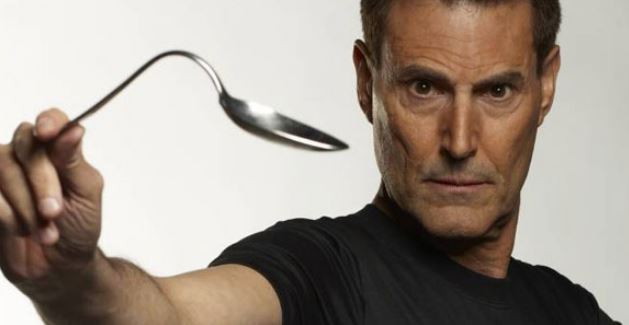 MIND-BENDING: Uri Geller is perhaps the most famous when it comes to spoon bending. His supporters point out to the numerous times he has publicly bent spoons. They also say if you are sitting on the couch and watching him on TV and you have a broken watch, your watch, no matter if it has been broken for years will start working again. Also, they say if you have a spoon or a key, you can also bend it just by stroking it gently. However, this can only happen if you are watching him on TV. His detractors dismiss him as an illusionist who performs magic tricks

In his continuing series of articles, ALEX HANKEY recounts stories of his years in Stanford and how he continued to come across examples of unexplained phenomena through other followers of Transcendental Meditation

The first four articles in this series have described how I became involved in meditation at the age of 10, and my visit to a nuclear power station aged 12, resulting in deep interest in nuclear physics; also my following up the first by learning the mental technique taught by Maharishi Mahesh Yogi known as Transcendental Meditation (TM) while doing my PhD at M.I.T., and becoming increasingly involved until I became a teacher of the technique in 1973.

At that time, I was working in Stanford. There was tremendous local interest in meditation and its applications and implications.
A Greek scientist at Stanford Research Institute (SRI), Dr Demetri Kanellakos, formulated a way of proving that the state of pure consciousness is a 4th State of Consciousness, on a par with the waking, dreaming and deep sleep states. Tremendous interest was shown in TM and other techniques everywhere. TM was proving very popular all over the San Francisco Bay Area, with large numbers learning in San Francisco itself, as well as Palo Alto where Stanford is located, and Berkeley, with its flagship campus of the University of California. SRI, where Kanellakos was located, was near Stanford University, and full of enthusiasts. It even held regular group meditations for its members.
Among them was Dr Arthur Brown, a distinguished research scientist, who was taking a lot of interest in the realm of subtle phenomena. One day, I arranged to visit him at home in the evening. He sat me on a sofa in the sitting room, and after supplying refreshments he took down a spoon on the wall above where I was sitting. “Look at this,” he said, to my amazement, “the last person to sit where you are now was Uri Geller. He made this spoon bend while he was here.” It was a strongly designed spoon, that one could not easily bend with one’s hands, and would quite possibly have snapped from the strain if one had tried to do so.
I looked at it in astonishment; it was bent almost double about half way down the handle. “It was effortless,” continued Dr Brown, “He simply stroked it, and all of a sudden, it deformed as you see it now.” In other words, a classic example of Geller’s metal-bending abilities.

SRI scientists were, of course, trying to see if there was any way that they could figure out what new laws of physics must be available so that human attention could have such a powerful psychokinetic effect. No one had the smallest idea. Most importantly for me, here was an example of a phenomenon for which scientists had no idea how it worked. One could say that Geller had performed similar feats so regularly, and there were so many stories, that it was now a well established phenomenon, with its own phenomenology. Geller would come to a location, ask for another person’s metal implement, usually a piece of cutlery, and then effortlessly bend it out of shape with the lightest touch. Sometimes a disbeliever would show that the article in question could be bent by physical force, and, even if the force required was considerable, try to cast doubt on the observed feat. But mostly that could not be done and the sceptics were left stultified — as was everyone else.
Evidently the human mind is capable of very considerable powers on a ‘subtle’ level, and no one knew how those might relate to known laws of physics.
That is a question on which my latest descriptions of the connection between mind and body shed quite a bit of light — but in those days, nearly half a century ago, I had not the smallest inkling of what might be involved. But I certainly thanked Arthur Brown for his kindness in showing me the spoon — definitely food for scientific thought over the long haul.

Another scientist working at the Stanford Research Institute at that time was Dr Willis Harman. Harman ran a futurology group, which was studying the long-term prospects for the future of humanity.
To those born after the end of the Cold War, it is difficult to imagine the outlook that gripped intelligent people in those days. The possibility of nuclear conflict, even its probability, hung over the whole planet like the Sword of Damocles. Novels like Nevil Shute’s On the Beach (1957) were published, which describes a scenario after a catastrophic conflict, where people in New Zealand are waiting for the slow but inevitable arrival of a nuclear cloud which has already laid waste to the entire northern hemisphere, and will eventually arrive and slowly subject them to slow, painful, lingering deaths.
In the mid-1960s, the BBC made a ‘documentary’ on what might happen to the population after a limited nuclear conflict. It was so shattering that the government forbade its general release, and it was only shown privately in small film theatres frequented by the educated population. I saw one of the showings in Cambridge.
Harman had started his work with the assumption that the fundamental philosophy by which people live has a profound influence on what happens to them later in life, and that similarly, the fundamental philosophy of the general population will exert an untold influence on the future of the planet.
He therefore selected a number of philosophies representative of the main perspectives espoused by the vast majority of the earth’s population. Atheism of various forms, like Materialism and its Dialectical variety, i.e. Communism, Liberalism, religions of various kinds, and finally, the ‘Perennial Philosophy’ as the British writer, Aldous Huxley (also a resident of California), had named the outlook of Sanatana Dharma, and its closely related heterodox philosophies like Buddhism and Jainism.

The only philosophy which apparently offered hope was the last named, the Perennial Philosophy. That offers a well-defined path to fulfilment in human life, is fundamentally optimistic in its outlook, and advocates practice of forms of meditation lead their practitioners into states of union with the Divine.
As India’s famous representative at the World Parliament of Religions, Swami Vivekananda, put it, “Man is born to become divine.”
As related in the accounts of higher states of consciousness in the previous article in this series, that becomes a practical possibility for those regularly practising the TM technique, and other similar Yoga sadhana programs.
Harman therefore came to the conclusion that the future was not without hope. But it would take determined spreading of meditation programs like TM, or Tibetan Buddhism, or Zen, or Sufism to make survival possible. Both then and today, Harman’s conclusion is of vital importance for India, and for the world as a whole. Only Sanatana Dharma provides a foundation for us to negotiate all the challenges we face ­— and will continue to face as time goes by.
Obviously, India is the nation that must take it on itself to spread the knowledge and understanding of these ideas, so that the whole world catches on, and humanity is inspired to join hands in a great program of guaranteeing its survival.