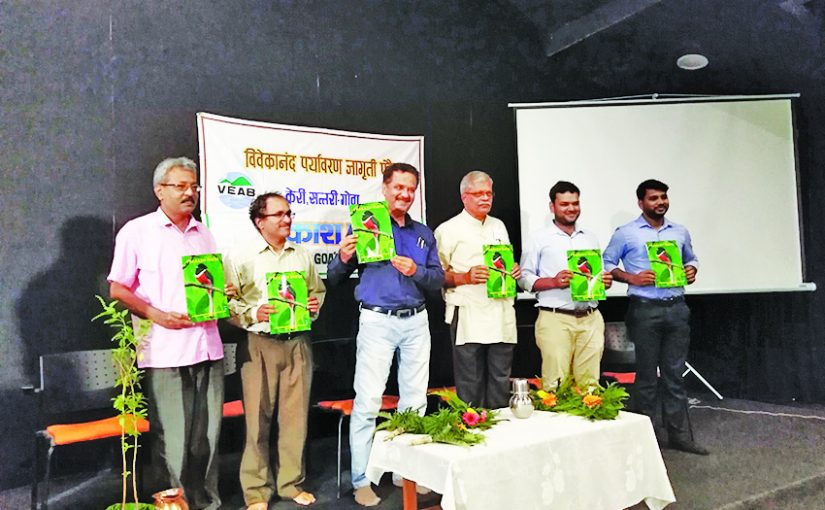 (left) The gift of a wooden elephant with love for Prakash Salelkar; (right) Another gift was a clay sculpture of Salelkar; His wife Teja (left) was seated with the audience with their grandson…like great grandpa, grandpa, father, will he too grow up to be a forester?

IT WAS one of life’s sweet moments, my dears, call it a green moment if you like and these are the most rewarding. The Vivekanand Environment Awareness Brigade (VEAB) is a grassroots group of people founded by environmentalist Rajendra Kerkar in 2000 and since then it has been engaged in educating people about Goa’s wealth of biodiversity vis-à-vis fauna and flora and the importance of conserving it.

Apart from keeping their ears close to the ground they also honor our stalwarts who guard our forest lands and wildlife sanctuaries in Goa. It was time to honour RFO Prakash Salelkar who’s earned a name for himself for being a tough but soft-hearted taskmaster. The recently retired forest range officer has many admirers and during 40 years in service he groomed young officers to be keen, alert wildlife conservators.

They were all there, the VEAB guys and girls: The VEAB team of Chandrakant Shinde, Sangam Patil, Parag Rangnekar, Pankaj Lad and others, with Isaac Kehimkar from Mumbai as chief guest (popularly recognized as the “Butterfly Man of India” he’s won name and fame for his `The Butterfly Book of Indian Butterflies’). Mr Kehimkar  expressed his respect and gratitude for good forest officers like Prakash Salelkar and spoke on the subject of exploring the fragile habitats of India with butterflies.

There can’t be a butterfly Kehimkar has not seen! He’s pretty much spent his life chasing butterflies from his backyard to across the country right up to the mountains of Ladakh. He said we should see India first for what doesn’t India with its 10 biogeographic zones doesn’t have, we have more than the rest of the world! Isaac waxed lyrical of the beauty of Arunachal Pradesh, Kashmir and mountains of the Himalaya, they offer unrivalled beauty in the world – these are the places which give birth to our fresh water and air…

For enchanted moments he took the audience travelling to red rhododendron forests wreathing the hills, spoke of hornbills and rhinos, swallowtail butterflies, hill jezebel, common red Apollo, regal Apollo at Khardungla Pass, Bactrian camels in Nubra valley, gossipy marmots of Ladakh, Asiatic lions…for him it is an annual pilgrimage to discover the natural wildlife places of India, and he echoed every nature lover’s sentiments when he put it perfectly, “Our forests are our backups…here we can go and copy what we have lost be it sugarcane or rice! The wild plants are our ancestors, our banks….” Hence, the need to hang on to our wild places.

After Isaac Kehimkar it was the turn of Pankaj Lad to tell us about how birdcalls communicate with one another through the seasons…along with a slide show Lad also added his own bird mimicry to delight the audience. He said we hear birds more than we see them! Wildlife, he observed, “helps us to understand ourselves better but alas, we’re forgetting nature day by day!” His was a most enlightening talk about birdsong communication…of the racket tailed drongo which copies other birds calls remarkably well.  Dawn and evening time are the best times to listen to the orchestra of birds… birds have alarm calls, begging calls, roosting calls, contact calls. Do you know that Goa has 11 species of woodpeckers and have you ever heard the drumming sound of a woodpecker?

Manda Datta of Prakash Parva spoke of the flora of the Bhagwan Mahavir National Park and its surroundings and praised the life and times of Prakash Salelkar who shared his formidable knowledge of Goa’s forests with his staff and whoever showed an interest. The general story is we have only one planet, take care of it. Overwhelmed by all the praise and tributes coming to him an emotional Salelkar confessed he loved his State of Goa and his wife Teja who took care of everything at home while he was away so often attending to his range forest officer duties… “I love my wife Teja!” The straightforward confession won him a near standing ovation even as his wife smiled in the audience.

Goa, says Prakash Salelkar is lucky to have as much as 20.38 percent protected forest lands for such a small state and it is vital we protect it. During his tenure he had designed as many as 44 programs because all should know why we have to protect our wildlife. He praised his total forest staff for working dedicatedly and confessed his life has been such that “in the last six years I haven’t taken a single tablet!”

Although in the course of his duties he has dislocated possibly all his joints…he was not one to go running to doctors. If he has caught offenders for poaching he has also made sure that they were also won over for the cause of conservation and rehabilitated. He owes his colleagues for guiding him on his walk through the forests of Goa for 40 years and he may be retired RFO now, but he is going to be busier than ever before because he would like to help those “people suffering on the fringes of protected areas. You cannot conserve if people don’t love you! I always tell my men to love people, take them along with you…if you have to hurt them to bring them back to line. That’s my message.”

It was a truly a green letter day as friends, staff and well-wishers trooped up to give the genial Prakash Salelkar a pat on the back and chat some more with him. I add my cheers for guys like him, my dears. May there be many more RFOs like him to protect Goa from going the concrete jungle way…the battles are many till the war is won with education and enlightenment and the message that if Mother Earth dies, we die along with her!