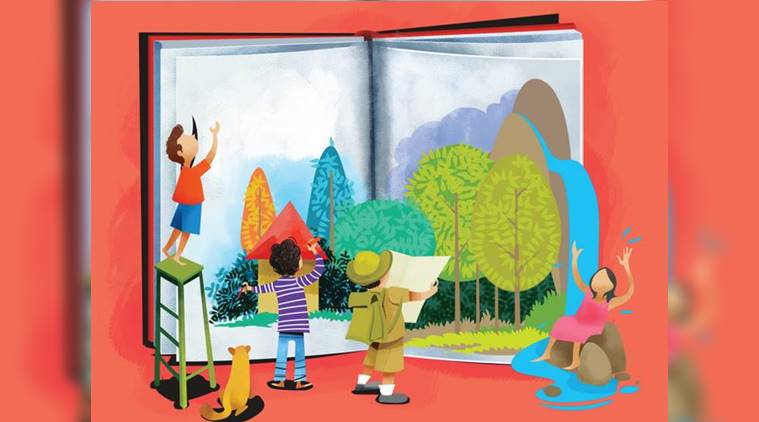 MORALITY: Most children’s book in India are considered incomplete unless they conclude with a moral directive such as “United We Stand”

The author, a writer of children’s books, argues that books written for kids should be read for pleasure and not for morals. Not every story book has to have a moral

Some people are allergic to peanuts, others to cats or rubber gloves. But I’m allergic to a particular question. One that’s lobbed at me with frustrating regularity, usually accompanied by a righteous shake of the head: “What’s the moral of your story?”
This query may seem innocuous to the world at large — but to writers of children’s books in India, it’s a toxic trigger. One that gets us puffing, ranting and gnashing our teeth. A reaction that I experienced soon after my first book was published about six years ago.
But let me begin at the beginning.
A long time ago, I was a journalist. Then my three daughters came along and I spent a few years doing potato-mashing-and-potty- analysing duty. Which probably explains why, when I eventually returned to my computer, what popped out was a book for children.
It was relatively easy to find the words; it was not too tricky to find a publisher. But what was enormously difficult was to find readers. “Grab every opportunity to spread the word,” my publishers urged and I acquiesced. After all, I was in the first flush of motherhood. The Six Spellmakers of Dorabji Street (2013) was my new baby — and it didn’t even need 14 nappy changes a day.
When a neighbour suggested that I set up stall at a conference he was organising, I agreed. I didn’t ask what the conference was for — I assumed it was connected with books or children.
I assumed wrong. It was a medical conference for naval doctors.
The venue was lined with stalls featuring liquids, microscopes and advanced technologies connected with the heart, the brain, the teeth. And there was I, with my sheepish expression and copies of my book.
When the conference broke for lunch, the doctors, officers and naval spouses took a chakkar of the stalls. Most goggled at me. But a tall, imperious woman stopped to peer. A group of junior officers trailed in her wake.
The woman examined the book intently. “Is this for children?” she asked.
“Yes,” I mumbled.
“What does it teach?” she demanded. “Any math concepts? Any science concepts?”
“No. It’s just a story…”
“Oh, a story…,” she exhaled. “In that case, what’s the moral of the story?”
“It is an adventure story,” I mumbled. “About six children in a building in Colaba who…”
“But children’s books should always have morals, don’t you think?” the woman exhorted before stalking away. The young officers indicated their agreement and moved away as well, leaving me with a sense of dismay, rage and bewilderment.
Over the years, these feelings have grown. For while that was the first time I encountered my bugbear, it certainly wasn’t the last. Even today, after seven books, countless book readings and workshops, I field this question again and again. I still have no answer because I don’t agree with the question.
It’s not just me. Every time a bunch of Indian writers for children meets, we fulminate over this peculiar obsession. “What’s with all these parents?” we wonder. “Why can’t children just read for pleasure? Why must every book teach a lesson?”
“It’s only in India,” somebody will chime in. “Nowhere else are you asked this question.” This is probably true.
If you go on Google and type “adventure stories” or “horror stories”, you get books and websites from around the world. But if you type in “stories with morals”, 80% of the results are Indian.
This says something rather frightening about us as parents. It says that we are unwilling to leave our children alone with their imaginations for even a few hours of the week. That we expect every single activity to yield tangible results — if not a certificate, then at least a crash course in morals and values.
It also says that we are unwilling to trust our children to navigate complexity and to arrive at their own conclusions. Which is why we want every story safely tied with a ribbon that announces “Slow and steady wins the race” or “United we stand, divided we fall”.
It’s almost as though it’s fine to bribe cops and fudge facts, as long as we eventually hand our children a book that announces: Honesty is the best policy.
As a writer of fiction, I protest. To squeeze an entire book — with its shades and subtleties — into one trite, simplistic line is to rob it of magic and power. Fiction possesses the incredible ability to transport children across space and time. To take them to the First Indian War of Independence in 1857. Or a distant planet. Or a future in which food and oxygen are prizes for which we must fight.
Through stories, children encounter other children in circumstances far removed from their own. They realise — over many books peopled with many characters and set in many different worlds — that people are people. Wherever they are, they feel happy and sad. They hate and they love and they dream.
“Empathy” and “diversity” are the two great buzzwords of the moment. There are few better ways to understand them than to read books that make you stand in the shoes of others. That compel you to arrive at your own conclusions about what is black, what is white and what ping-pongs somewhere in the middle.
A moral reduces a complex narration into a processed and packaged sentiment. It’s a bit like giving your children a Vitamin C supplement rather than allowing them to enjoy a fresh, juicy, messy orange.
Children don’t need messages in capsules. They need to wander through the dark forests and twisty staircases of fiction. To get lost and then eventually find their ways — without the dubious aid of neon signposts.