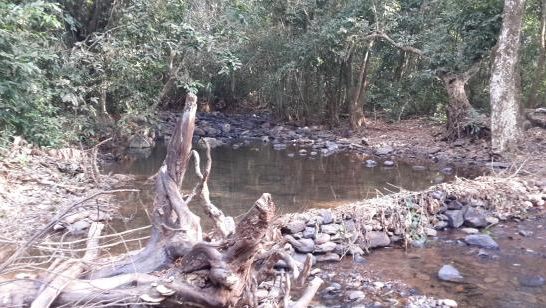 HIDEAWAY RESORT: The eco-resort allegedly promoted by Abhijeet, son of Manohar Parrikar, falls within the eco-fragile area adjacent to the Netravali Wildlife Sanctuary which was notified by Lt General Jacob, then Governor of Goa

A PIL has been filed by Abhijit Satyavan Dessai in collaboration with the Congress party against Hideaway Hospitality, an alleged Eco Resort promoted by Abhijat Manohar Prabhu Parrikar. The petition alleges rampant deforestation adjoining Netravali Wildlife Sanctuary in property bearing survey no- 78/1 of Netravali village in the notified eco sensitive zone of Netravali which is part of Sanguem Taluka. The petition alleges that the documents submitted only contain the letterhead of Hideaway Hospitality and that no such company seems to be registered. The petition also alleges that clearance was given on priority basis by the Investment Promotion Board and that the entire machinery of the State govt was misused to grant ‘in-principle’ approval to the project despite multiple irregularities

B) FACTS RELATING TO THE PURCHASE OF THE PROPERTY, APPLICATION BY M/S HIDEAWAY HOSPITALITY/ABHIJAT PARRIKAR AND THE GRANT OF PERMISSIONS FOR THE PROJECT IN THE ECO-SENSITIVE ZONE AND ACTIONS BY STATE Govt:

Application made even before Rules came to be framed & statements made & expectation from Govt:

Reply of Forest Department – forms common boundary with reserved forest Neturlim IV in the North, claims not identified as private forest & not within limits of Wildlife Sanctuary:

Speedy forwarding by IPB Board:

State Exo Sensitive Zone Monitoring Committee noting that though no detailed information had been submitted, only because it assured to use eco-friendly material, it was being approved – such generosity in this case!