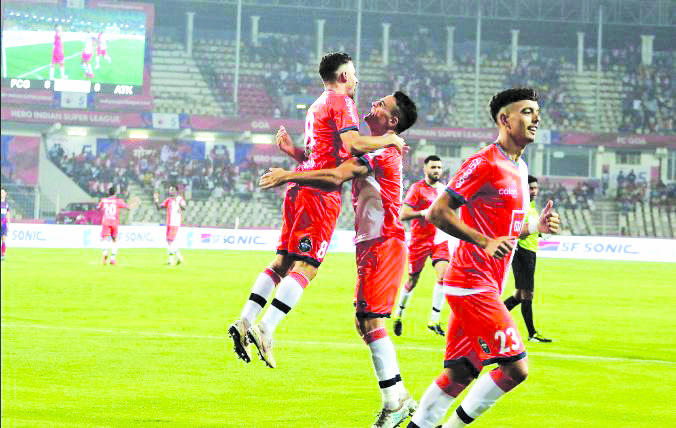 A VALENTINE’S DAY GIFT FOR GOANS: FC Goa greatly increased their chances of sealing a play-off spot with an impressive 3-0 victory over ATK at the Jawaharlal Nehru Stadium in Goa on Thursday, February 14. After Jackichand Singh’s opening minute strike, Ferran Corominas bagged a brace to hand all three points to Goa. The result also means that ATK are almost out of the reckoning for a spot in the semi-finals

IN Vishnu Wagh’s death I have lost a personal friend of many decades and Goa is without a true Goenkar. Our “tiger” is no more. The multi-talented and ever so versatile Vishnu Wagh was a poet, writer, dramatist, journalist, artiste, par excellence. The very outspoken MLA and deputy speaker had the spine to roar against the follies of the BJP government, a task now being ably taken forward by current Deputy Speaker Michael Lobo.
— Aires Rodrigues, Ribandar

RAFALE DEPRECIATION
THE Divine Chartered Accountant (DCA) never fails. This holds good for Anil Ambani’s group of companies whose market capitalization has lost 68% value in one year. For the DCA nothing goes unnoticed. As if to hold Anil Ambani (28th on Forbes Indian billionaires list in 2018) group of corrupt practices, it has been revealed that the group lost `47,300 crore in market capitalization across all companies, thus for the time being making Anil Ambani no longer a billionaire in dollar terms.
The depreciation in value could be the divine depreciation for his involvement in the Rafale deal which even the government at the Centre does not want to concede as having received kickbacks for the defence deal. You can count on the Divine Chartered Accountant to keep clean balance sheets for those who have gone wayward. However, let’s hope that the people of India do not let the BJP government off the hook due to its involvement and defeats the aspirations it harbours of winning the Lok Sabha election later this year.
— Elvidio Miranda, Panaji

STRANGE BJP
BJP never ceases to amaze! Amit Shah called upon his Goa cadre to “woo the minorities” and bring back BJP to power. Strange, because the BJP came to power appeasing Hindu majority, opposing the perceived Congress appeasement of minorities! Leaders must be compassionate: are the BJP leaders anywhere near that?
The proof of the pudding is in the BJP’s recent Goa meet with Amit Shah leading the applause every time Parrikar spoke. Cancer patients are provided palliative care to live many more months or years of worthwhile, good quality life, even relieving symptoms such as pain. The whole regiment of treatment is with this one goal. What we see in every public appearance of Parrikar is exactly the opposite. Extremely sad are the views of local oncologists whose opinions are contrary to their teachings!
This is what is amazing: BJP’s ability to brainwash even educated doctors of medicine, leave alone the masses. Amit Shah has signed for the BJP’s stand on humaneness when he forced Parrikar to campaign at his meet.
We can forgive any amount of excuses including Parrikar’s braveness, etc; recall that Parrikar himself advocated that politicians should quietly retire when they cannot perform, but it will be just that: excuses.
When Shah and Company do not care for their leaders from Goa what will they care for the rest of the cadre? How long will they go on hitting their head on the wall?
— R Fernandes, Margao

WISHFUL THINKING?
THIS goodwill message of hope is making the rounds during this month of hope love and goodwill to all and I’m sharing it here with your readers.
What is love?
Love is when my mom kisses me and says “Mera bachha lakhon me ek hai.”
Love is when you come back from work and dad says “Arey beta, aaj bohut der ho gai.”
Love is when your bhabhi says, “Hey, hero, ladki dekhi hai tere liye, koi aur pasand hot to bata dena.”
Love is when your brother says, “”Bhai, tu tension na le, main hu na tere saath.”
Love is when you are moodless and your sis says, “Chal bhai kahi ghoom ke aatein hai.”
Love is when your best friend hugs you and says “Abe tere bagair mazaa nahi aata yar…”
These all are best moments of love, don’t miss them in life!
It’s love, when a little girl puts her energy to give dad a head massage. It’s love when a wife makes tea for husband and takes a sip before him.
It’s love when a mother gives her son the best piece of cake or anything else.
It’s love when your friend holds your hand tightly down a slippery road. It’s love when your brother messages you and asks did you get home on time. Love is not just a guy holding a girl and going around town! Love is when you send a small message to your friend to make them smile. Love is actually another name for caring. Welcome the season of love to value all these things in your life!
— Anonymous Reader, Goa

NO COMMENTS
ON the morning of Feb 13, 2019, at 8.30 am, at Candolim, a group of eight tourists from Madhya Pradesh came to the beach and three persons ventured into the sea for a swim. Suddenly one of them got dragged into the sea. A foreigner who was strolling on the beach spotted the victim in distress and rushed into the sea with a rescue board placed on shore by the lifeguards.
The lifeguard on duty spotted the foreigner rushing into the sea with the rescue board and he too rushed to assist. Together the foreign tourist and lifeguard brought the victim to shore, but he was unconscious by then.
CPR was commenced and back-up assistance called for and the patrol jeep shifted the victim to the Candolim PHC. The doctor continued CPR but unfortunately, despite many attempts, failed to revive the victim who was finally declared dead.
— Mansi Coutinho, Goa