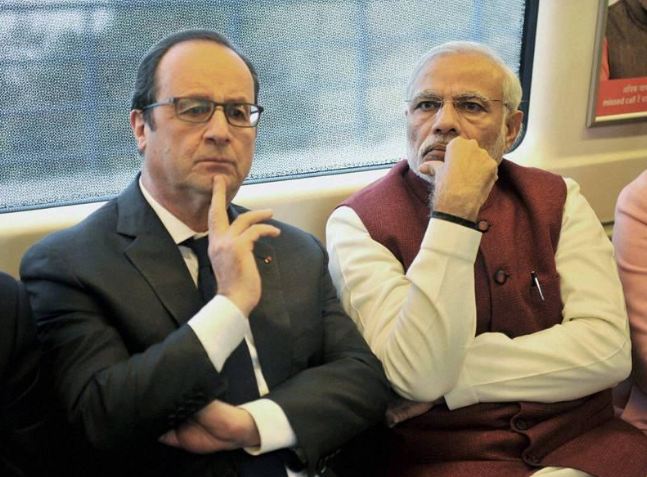 IN A FIX: Former French President Hollande and Modi allegedly colluded on the Rafale deal with Ambani benefitting to the tune of `30,000 crore

PM Narendra Modi accused N Ram of stealing confidential Defence Ministry papers relating to the Rafale deal with a threat to sentence him to 14 years imprisonment for alleged breach of the Official Secrets Act 1923! However the Supreme Court held that the Act cannot be use to prevent disclosure information on corruption and human rights violations and if public interest in disclosure outweighs the harm to protected interests

Claiming in the Supreme Court that documents related to the Rafale fighter deal were “stolen” from the Ministry of Defence, the government had threatened to invoke the Official Secrets Act and initiate “criminal action” against two publications which ran reports on the basis of these documents, and a lawyer.
Attorney General K K Venugopal, who made this submission on March 13 before a three-judge bench of Chief Justice of India Ranjan Gogoi and Justices S K Kaul and K M Joseph said “documents in the possession of The Hindu and ANI are stolen documents”. The lawyer he mentioned was an apparent reference to Advocate Prashant Bhushan who was arguing a review petition on behalf of himself and former Union Ministers Yashwant Sinha and Arun Shourie.
The petitioners sought a review of the December 14, 2018 order of the Supreme Court which dismissed all PILs seeking a probe into alleged irregularities in India’s Rafale deal with France. They also sought perjury charges, saying the Centre suppressed crucial facts when the Supreme Court decided to dismiss the PILs.
On February 8, a report in The Hindu, citing a “Defence Ministry note” of November 2015, stated that the Ministry “raised strong objections to ‘parallel negotiations’ conducted by the Prime Minister’s Office (PMO) with the French side” in the Rafale deal. ANI released the same note with additional notings.
N Ram, chairman of The Hindu Group, said nobody would get any information from the newspaper on the confidential sources who provided the documents. “We are fully committed, absolutely committed to protect the confidentiality of our sources… the documents speak for themselves and the stories speak for themselves,” he said.
Proceedings began with Bhushan saying that the court has not addressed the main prayer in their original petition which was to order a court-monitored probe into the Rafale deal.
At this, Venugopal said he had a preliminary objection: that the documents sought to be relied upon by Bhushan “were stolen from the Defence Ministry” allegedly “by present or former employees… we don’t know (by whom)” and a probe was on.
He said the government will initiate “criminal action” since the matter concerns sensitive Defence purchases and is covered by the Official Secrets Act.
Told that the document was published on February 8, CJI Gogoi asked what had the government done until now. He told Venugopal to apprise the bench when it assembled post-lunch. When proceedings resumed, the Attorney General submitted that an internal probe was conducted regarding the alleged theft but no FIR was filed since it would then have had to be filed against the lawyer using it too.
He said the “note filed cannot be the subject of judicial process” and that being a matter of national security, it was outside the purview of the Right to Information Act. He submitted that in the government “views and counter views are expressed” in such matters and “then there may be a third view”. So “the thought process can’t be taken as final decision”, he said, adding that only the final decision can be subject to judicial review.
The submission that stolen documents cannot be relied upon by the court did not go down well with the bench. Justice Joseph asked Venugopal “suppose there is a corruption complaint, are you going to shelve it under national security?… Is there liberty to commit corruption?”
The AG said the matter being one of national security was beyond judicial scrutiny and asked “do we have to come to court and explain every time a war is declared”. He said the question was whether the court should entertain if a petitioner came to it with unclean hands.
At this, Justice Joseph said: “You have to state the law… you can’t… say court can’t reply on the evidence because it was obtained illegally. That’s the law in the USA, not India.” He observed that “stolen material can be relied upon provided it’s relevant” and “you cannot have a general proposition” that it cannot be used.
The AG replied that it can be relied upon provided the petitioner crosses a threshold which was establishing the source. Intervening, the CJI asked what if a person who cannot prove his innocence steals a document which helps him prove that he is not guilty and uses it. The AG repeated that it can be used if the source is established and if it is relevant.
Justice Joseph then referred to the Bofors case and told the AG, “there were allegations of corruption in Bofors” and asked whether the same standards would have applied to it also. The judge said that in India, “we have an open system”.
To this, the AG replied: “In no other country Defence is a matter of judicial review. There are courts in other countries also. Your Lordships are looking at this as if it’s some administrative law issue.”
“… when it comes to the purchases of the planes which are essential to our survival, then courts say can we look into the documents also because there are some allegations of wrongdoing, I say no… whatever court says will be used politically… Due to the high respect that this court commands, any word from the court will be used for the purpose of destabilising India,” he said, and added “so please exercise restraint”.
“Look at the damage which is done,” the AG said, tracing the history of the deal. Venugopal said while other countries had F-16s, India was still left with MiG-21s and this underlined the urgent need for acquiring the Rafale. Venugopal said “what we are being told is there are flaws in it (Rafale)”, and that there was an attempt to get the court to order a CBI inquiry so that other counties will know that if they plan to sell to India, they will have to face hurdles in the form of Parliament and the court.
Bhushan criticised the CAG report on the Rafale purchase saying it was for the first time that pricing details have been redacted from the report.

The attempt to claim privilege and push the Rafale jets’ pricing details back into the dark zone was met with a stoic counter from Justice Joseph in the Supreme Court on Thursday, April 14. Justice Joseph asked the government to read out Sections of the Right to Information (RTI) Act, 2005. The judge said the information law has revolutionised governance and overpowered notions of secrecy protected under the Official Secrets Act, 1923.
Attorney-General KK Venugopal was first made to read out Section 22 of the RTI Act, which declared the RTI to have an “overriding effect” over OSA. Then Section 24, which mandates even security and intelligence organisations to disclose information on corruption and human rights violations. Finally, Section 8(2), which compels the government to disclose information “if public interest in disclosure outweighs the harm to protected interests”.
Venugopal defended that defence purchases dealt with the security of the state, which “supercedes everything else”. To this, Justice Joseph said, “The Parliament has passed the RTI Act in 2005 and brought about a complete revolution, a complete change. Let us not go back to what it was”.
The government wants the court to refrain from examining the documents, which have already been published in the media, primarily The Hindu, on the purchase of the Rafale fighter aircraft. It claimed the documents were unauthorisedly photocopied from the originals kept in the Ministry of Defence and sneaked into the public domain.
Even the petition seeking a review of the December 14 judgment of the Supreme Court, upholding the Rafale deal, is based on these “stolen” documents”, the government claimed. In an affidavit filed on March 13, the government said the leak was a “conspiracy” to jeopardise national security and friendly relations with France, the home of Rafale’s manufacturer, Dassault Aviation.
The two preliminary issues were the admissibility of “stolen” documents as evidence and the claim of privilege raised on them by the government. “How is it that you decide privilege protection? Is there a high-level, inter-departmental call taken on this? Can’t the court even examine the documents to decide your claim of privilege,” Justice Joseph asked Mr Venugopal at one point.
Justice SK Kaul asked Mr. Venugopal the logic behind claiming privilege now when the documents were already in the public domain.
“They have produced it in the public domain after stealing it. State documents cannot be published without explicit permission,” Venugopal cited Section 123 of the Evidence Act.
In his turn, advocate Prashant Bhushan, said the government’s reason for seeking privilege was malafide.
“Documents are already in public domain in public interest. There is a lot of Supreme Court judgments which hold that public interest trumps over privilege,” Bhushan argued.
In a parting shot, review petitioner and former union minister Arun Shourie, who was accompanied by his former colleague Yashwant Sinha, said the government’s claims that the Rafale documents were stolen proved that they were genuine.

(Compiled by GO Staff courtesy Indian Express and The Hindu)