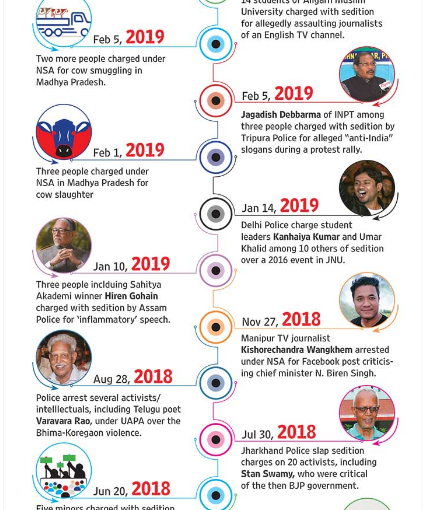 On February 12, at least 14 students of Aligarh Muslim University (AMU) and several ‘unidentified’ people were charged with sedition in Uttar Pradesh. Their crime: alleged assault on an English TV news channel crew. If that sounds bizarre, consider this. In the first week of this month, five people were sent to jail under the National Security Act (NSA) in two separate cases of cow slaughter and ‘cattle smuggling’ in Madhya Pradesh. The NSA for cow-related cases could, perhaps, have been understandable had the state continued to be under a BJP government. But there has been a change of guard in Madhya Pradesh and it is a Congress-led government which decided that killing and smuggling cows are crimes that “threaten the security” of India. Though state home minister Bala Bachchan defended the action, saying the suspects were repeat-offenders, senior Congress leaders were aghast at the use of a law fit only for terrorists. Former finance minister P. Chidambaram said the use of NSA by the MP government was “wrong”. The five men are now locked up in separate jails. The AMU case would not come as a surprise for many as Uttar Pradesh has a long list of cases filed for sedition or under provisions of the NSA, a fact acknowledged officially by the Yogi Adityanath government.
The Madhya Pradesh and UP cases are just symptoms of a bigger malaise sweeping through India — the indiscriminate use of harsh and archaic laws, mostly against people seen to be dissenting against the Centre and state governments. People protesting against a contentious bill have been charged with sedition in Assam, a journalist critical of a chief minister has been booked under the NSA in Manipur and left-leaning activists have been slapped with the draconian Unlawful Activities (Prevention) Act (UAPA) in Maharashtra. Activists and critics see a pattern in the crackdown, saying the use of such laws — which allow the government to jail people for long periods without trial — is meant to browbeat dissenters and political opponents into submission (‘Sshh! Government is Working’).
“There is something that unites all of them (sedition law, NSA, UAPA). It is the inherent undemocratic tendency of these laws which somewhere restrict the fundamental freedoms that the Constitution guarantees to people,” says law expert Anushka Singh, an assistant professor at Ambedkar University, Delhi. “At one level, every law restricts the liberties of the people by laying down norms of conduct, but there is a justification for penal provision in a democracy; the justification could be anything related to law and order and personal security of citizens involved. But these laws are particularly prone to undemocratic tendencies of the state because of their vague nature and the overriding powers they give to the executive allowing for their arbitrary use,” adds Singh, who has written the book Sedition in Liberal Democracies.
Sedition—written into Section 124A of the Indian Penal Code (IPC)—has arguably emerged as the most abused law in recent times; it’s apparently the answer to all opponents and dissenting voices that the party in power wants to stifle. The law has come in handy at least in two states of the Northeast, where at least six people, including a Sahitya Akademi award winner, a journalist and an activist, have been charged with sedition since January. They were opposing the Citizenship (Amendment) Bill 2016, which aims to ease the process of getting Indian citizenship for non-Muslims from three neighbouring countries.
One of those charged with sedition is Assam’s firebrand activist Akhil Gogoi, who was once part of Anna Hazare’s anti-corruption movement. “We have been carrying out agitations since the time Hiteswar Saikia was the Congress chief minister in the early 1990s. We had also agitated against the 15-year Congress rule in Assam. I have even said former CM Tarun Gogoi should be thrown into the Brahmaputra. But I have never felt so threatened in my life…Any individual who believes in democracy feels threatened under the BJP rule,” says Gogoi, who has been charged along with journalist Manjit Mahanta and writer-intellectual Hiren Gohain. “I have been sent to jail at least 36 times, many a time during the Congress regime. but never charged with sedition,” Gogoi adds.

National Security Act
The law was introduced in 1980 to enable “preventive detention in certain cases and for matters connected therewith”.
The NSA empowers the central and state governments to detain a person with a view to prevent him/her from acting in any manner prejudicial to the security of the state, or maintenance of public order, or maintenance of supplies/services essential to the community.Under this act, a person can be detained without a charge for up to a year.A person can be detained for up to 10 days without being informed about the reasons for the detention.The act is often compared with the British Raj’s Rowlatt Act, which denied access to courts or lawyers to those who were detained, leading to the coining of the phrase ‘No vakil, no appeal, no daleel’.

Section 124A of IPC: Sedition
The sedition law can be applied to anyone who through “words, either spoken or written, or by signs, or by visible representation, or otherwise, brings or attempts to bring into hatred or contempt, or excites or atte­­mpts to excite disaffection towards the government estab­lished by law in India”.
Maximum punishment is jail for life, to which fine may be added. Or impris­onment up to three years. Sedition is a non-bailable offence. Anyone charged under this law can’t get a government job. The law was originally drafted in 1837 by Thomas Macaulay, the British historian-politician who introduced western education in India and famously said, “It is, I believe, no exaggeration to say that all the historical information which has been collected from all the books written in the Sanskrit language is less valuable than what may be found in the most paltry abridgement used at preparatory schools in England”.

Unlawful Activities (Prevention) Act
It gives the State the power to combat terrorist activities that threaten, or are likely to threaten the unity, integrity, security, or sovereignty of India, or activities done with the intent to strike terror or those which are likely to strike terror in the people of India or any foreign country.
The act was amended in 2008 after the Mumbai terror attacks and became almo­­st a mirror image of POTA, which was repealed four years earlier. Under UAPA, enacted in 1967, a person can be detained for up to six months without a charge.

Independent India’s first sedition case
Kedar Nath Singh, a member of the Forward Communist Party in Bihar, made a fiery speech in Begusarai on May 26, 1953. “Today the dogs of the CID are loitering round Barauni (in Begusarai). Many official dogs are sitting even in this meeting. The people of India drove out the British from this country and elected these Congress goondas to the gaddi…We will strike and throw out these Congress goondas as well,” he said about the Congress government in the state.
His sedition case went up to the Supreme Court in 1962. The court’s landmark ruling—in which it narrowed the scope of Section 124A—is still taken as the reference point for all sedition cases in India.
The court said mere “strong words used to express disapprobation of the measures of government” are not seditious. It also clarified that “comments, however, strongly worded…without exciting those feelings which generate the inclination to cause public disorder by acts of violence” are not sedition.