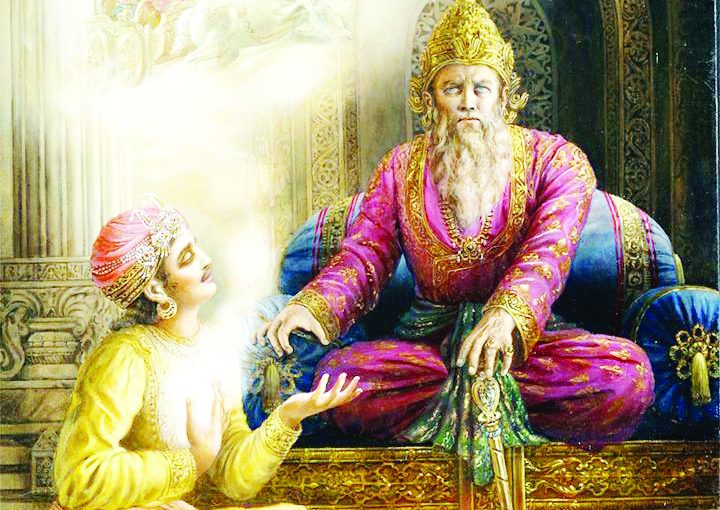 UNEXPLAINED PHENOMENA: Re-examining historical manuscripts with a scientific eye can lead us to new discoveries. The story of Sanjaya, who could report on a war that he could see only through his minds eye, assumes great importance if we stop looking at it as merely a story and open our minds to the concept of ‘paranormal’ communication

As part his continuing series of articles, this week Dr ALEX HANKEY, professor at S-VYASA university in Bangalore, expounds on the distinction between ‘gross’ and ‘subtle’ phenomena

These articles have described how, despite being a theoretical physicist trained at Cambridge, England, and M.I.T. in the U.S., I have dedicated my life to studying the relationship between India’s ancient sciences developed some 5,000 years or more ago in the Vedic Civilisation and various modern scientific disciplines.

The first few articles recounted how, at the age of ten, I spontaneously started a technique of meditation stimulated by the death of my mother, and slowly grew more and more interested in science. They told the story of my introduction to a formal system of Indian meditation, one due to Adishankara, while I was doing my PhD, and how I liked it so much that I first became a teacher and then a founding faculty member of the university started by Maharishi Mahesh Yogi who had brought it to the West. Under his guidance I learned about Vedic sciences and their understanding of things like self-realization and higher states of consciousness.

Later articles have developed my understanding of such Vedic sciences as Ayurveda, its system of medicine, and Shiksha, its science of speech and cognition. The most recent articles have explained my involvement in Jyotisha, its system of sidereal astrology, and Vastu, its science of architecture. In every case, I have explained how the Vedic sciences’ concern for the subtle (Sukshma) levels of reality result in their system having incomparable advantages over the equivalent western understanding, which lack any equivalent concepts. Ayurveda can cure most cases of chronic disease, especially if they are diagnosed early; Jyotisha can foresee and usually prevent most negative events that may occur in a person’s life – or at least mitigate them extensively. Similarly, Vastu has advantages that are unimaginable without its key principles, and can radically improve the lives of those living in dwellings build in accordance with them.

How and why can this be? Having studied the Vedic approach and its results in these various applications of its wisdom for the past 45 years I can say without hesitation that the subtle levels of reality recognized by the Vedic sciences definitely have their own level of integrity. So do the principles supporting them! “But how could that possibly be?” you may ask. “Surely the modern western sciences have discovered all that can be known about the physics of matter. Surely there is no room left for such possibilities!”

The answers that I have found to these questions are quite surprising. Modern physics divides its descriptions of material reality into two categories, those valid at the macroscopic level of sensory experience, for which classical physics provides a mathematically precise, but in reality a physically approximate description; and those at microscopic, atomic and subatomic levels for which it provides a mathematically approximate, but physically exact description. Classical physics’ exact description cannot be fully utilized due to experimental and practical uncertainties; quantum physics inherently fulfils Heisenberg’s Uncertainty Principle with the consequence that no physical phenomenon has a numerically exact description. What further physics remains?

The answer is that both quantum physics and classical physics apply only to states of matter that are inherently stable. BUT in complex systems, matter can assume states where one of the parameters used to describe it has no exact observable value, because the system has become inherently unstable. The system is at an instability. Instabilities obey intrinsically different physics from both quantum and classical physics, and should properly be considered a third domain, different from each – although, in practice they are considered an extension of them, depending on whether the system being considered is described by classical physics, or quantum physics. Examples: a gas-liquid system is of the former, while a superconductor or a superfluid is of the latter.

All such systems exhibit phase transitions; the first in the transition from the liquid phase like water to the gaseous phase, in that case, water vapour; the others from a high temperature where the material does not exhibit its ‘super’ properties, to the phase at lower temperatures where they do manifest. The first example exhibits an end point to the line of liquid-gas phase transitions, a temperature and pressure where the distinction between liquid and gas is lost. At that point, the material’s density becomes unstable. It cannot decide whether it is a gas with a slightly lower density, or a liquid at a slightly higher density, because it is undergoing violent fluctuations between the two possibilities. Density is no longer stable.

Study of subtle phenomena reveals that they are all associated with instabilities — those found in organisms’ regulatory systems. That organisms site loci of control of any regulated function at critical instabilities is a fundamental fact of complexity biology, a very important aspect of biology that has evolved from the discoveries of scientist Stuart Kauffman in the later 1960’s when he was a medical student at Stanford University Medical School. The entire structure of regulation of most organisms is centred on its being in states of critical instability.

Why? Because that is a condition that optimizes regulation and can therefore be taken as the state of health used in most, if not all, organisms. This argument, made by Complexity Biology, explains how most if not all organisms maintain their states of health. But it also introduces instabilities into biology at a previously unexpected level that is absolutely fundamental. When we consider the consequences for biology as a whole, of the new instability physics, many phenomena become predictable. All of them are ‘subtle’. The ones named earlier in the article are examples. All can now be considered aspects of modern science, which has been expanded by the new theory to include these as applications. That is truly paradigm-shifting revolutionary scientific work.

Consider more examples: most humans function at gross levels of perception and thought, but the Vedic seers, the Rishis, were able to function mostly at the subtle level. A well-known one is Sanjaya, the Rishi in Bhagavad Gita who tells the story of the battle of Kurukshetra to the blind king, Dhritatrashtra.

Medical doctors function at a gross level; healers who cure diseases directly function at a subtle level. Many couples in love become ‘lovers’ at a gross level, the Hollywood / Bollywood norm; lovers with completely spiritual orientations may restrict their Love to the level of the heart, at a subtle level. Examples are endless. Subtle phenomena are far more powerful than the gross ones. The subtle controls the gross. Ancient Indian sciences working on subtle levels are far more powerful than modern sciences working on gross levels. That is main conclusion that I have come to after 46 years working on the question of their relationship posed to me by His Holiness Maharishi Mahesh Yogi when I joined his university as a founding faculty member in 1973.