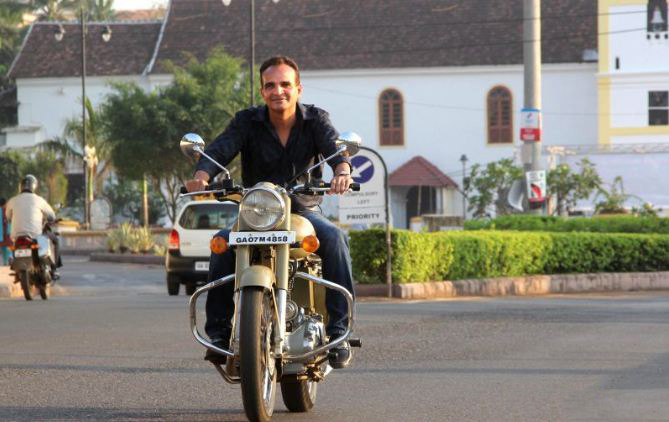 CAPTURED: Babush has already taken over the CCP and can take over the whole state if he wins the by-election to Panjim constituency caused by the death of Manohar Parrikar

The former ‘monster rat’ has transformed himself into a dragon. Babush Monserrate is back in the election fray, breathing fire both at friends and enemies. He has ditched Vijai Sardesai by deciding to contest independently. He already has five MLA supporting him whose campaign he financed, and may contest or buy up whosoever wins in the remaining three constituencies. With his control of the CCP and the huge migrant vote, his opponents, including Utpal Parrikar, are no match for the dragon

Goan politics is a numbers game. The ruling BJP has 14 MLAs (including three defectors). The party got only 13 seats in the 2017 Assembly election and despite party hopping, the recent deaths have restricted its strength to 14.

The Congress, the oldest party in the state apart from the MGP, surprised itself when it got 17 seats in the Assembly. It lost the chance to form the government because of the fight between Luizinho Faleiro and Digambar Kamat. Its strength is now down to 14, the same as the BJP.

The MGP which was the first to join the BJP alliance to form the government after the 2017 elections, had only three seats as its president Deepak Dhavalikar was defeated in Priol by Govind Gaude, and it lost the Ponda seat held by Lavoo Mamladar. To its good fortune, the party hopper Manohar Azgaonkar decided to contest from Pernem (represented by Rajendra Arlekar) when it was declared a reserved seat baring the BJP from contesting it. (Babu Azgaocar claims to be an SC by virtue of which he contests all the reserved seats every election.) Sudin Dhavalikar and Deepak Pawaskar were the other two MGP MLAs. Recently after the death of Manohar Parrikar, Babu Azgaocar and Deepak Pawaskar being 2/3rd of the MGP legislative party of three, ‘merged’ with the BJP in a midnight drama. This left the MGP with only one MLA — Sudin Dhavalikar — who found himself unceremoniously dumped from the post of deputy CM by the BJP Acting Speaker Michael Lobo.

The Goa Forward is the newest party in Goa. In its very first election it managed to get three seats. Vijai Sardesai insisted that he would support only Digambar Kamat. When the Congress high command refused, Vijai joined the BJP. In addition three Independents extended support to the Goa Forward giving Vijai Sardesai effective control of six MLAs in the 35 member Legislative Assembly.

The strength of the Assembly has fallen because of the deaths of Francis D’Souza and Manohar Parrikar, and the defection of Dayanand Sopte (Mandrem) and Subhash Shirodkar (Shiroda). Since the Speaker cannot vote, the effective strength is 35 instead of 40. In the 40-member house the Vijai gang of six has great influence. If it withdraws its support to the BJP the government could collapse. As of now Vijai Sardesai is supporting the BJP both in the Assembly and Parliamentary constituencies.

Vishwajit Rane played the role of king-maker when he decided that there was no future in the Congress party and joined the BJP. He also induced Sopte and Shirodkar of Shiroda to defect to the BJP. He played a role in making sure that Francis D’Souza’s son, Joshua, got the Mapusa ticket. He was strengthened by the fact that he managed to persuade Babush Monserrate to accept the post of vice-president of the Goa Forward.

However, Vijai and Vishwajit are mere paper tigers. Nobody notices the real threat to both the Congress and the BJP. The elephant in the political room in Goa is Babush Monserrate. Babush does not have a party, but parties run after Babush because he has both money and muscle power. He has never lost a single election except the last election against Sidharth Kuncalienker when Parrikar went to Delhi. Even this was by a narrow margin of less than 1,000 votes.

Though Babush is not an MLA or a member of the Congress/MGP/BJP or Goa Forward, he is more powerful than all of them. This is because without having a party he has as many as five MLAs supporting him — Tony Fernandes from St Cruz, Pandurang Madkaikar of Cumbarjua, Isadore Fernandes of Canacona, Francis Silveira of St Andre, and of course his wife Jennifer from Taleigao.

Babush crushed the ambition of Vijai Sardesai by refusing to accept the GF ticket and insisting on standing as an Independent. Normally candidates run after leaders and are willing to pay huge amounts for a ticket. In the case of Babush it is the other way out as he has so much money that he can not only finance his own election but that of all the 40 MLAs in the Assembly.

No MLA has as much money power and muscle power as Babush. He was left a fortune by two childless aunts. A lot of it was acquired by the Goa University. Fortunately for Babush, former Chief Justice of Allahabad, Ferdin Rebello, who was then a lawyer in Goa, managed to get most of his property back. The judge was reportedly rewarded with a bungalow in Dona Paula.

Babush then got into the money lending business. His bakras were builders. In the late ‘90s there was a building boom and everyone turned to money lenders when banks were not willing to lend sufficient capital. Apart from charging 10% a month or 120% a year on the money borrowed, (which he took in advance, deducting it before he  gave the builders the money) Babush smartly made sale deeds so he would get flats in the new buildings coming up if money was not repaid. Besides half-a-dozen bungalows, including his ancestral home in Taleigao and his new bungalow in Dona Paula, he also now owns and is principal of the Santa Minguel High School, earlier called Ideal School.

Like all of Babush’s projects he doesn’t believe in paper work. So unlike in other schools you don’t require a birth certificate or a domicile or even residence certificate to get admission. So all the migrants admit their children and pay a heavy fee of `800 per month and this also has become part of the vote bank for Babush.

Babush is the patron saint of all migrants. You can build an illegal construction and you can get a ration card or a voter ID and Aadhaar card and even a PAN card if you vote for Babush. If buildings are coming up in the St Inez nullah and on the banks left and right it is because of the blessing of Babush who protects and encourages the slum dwellers of Camara bhatt and other bhatts as they are vote banks of the ‘monster rat’.

Babush has tried becoming the MLA for Panjim several time but backed out last time after ‘match fixing’ with Parrikar. Babush controls the CCP and has appointed Uday Madkaikar, brother of his good friend Pandurang Madkaikar, as the new Mayor of the CCP. It is rumoured that Babush may finally form his own party and hopefully it would be called the ‘Goondagiri party’. If he puts up his own party he can put up candidates for all the four Assembly seats and will then have nine MLAs supporting him. With the help of his sometimes-friend Vijai Sardesai with his six MLAs, Babush can then become the CM of Goa.

Many people will be shocked at the idea of Babush becoming the chief minister. But when a gunda like Narendra Modi can become prime minister and Amit Shah can push aside the veteran LK Advani to contest from Gandhinagar, why can’t Babush become chief minister? It does not matter that he is not educated. Most politicians are not educated. The first chief minister of Goa, had not passed even the 5th standard. Lalu Prasad and Yogi Adityanath also have no qualifications. Babush will probably be a good chief minister administratively because he understands the Finance and Home Ministries. I don’t know why the Law & Order Ministry is called the Home Ministry but who better than Babush to control all the gundas being a gunda himself.

The alternative is a party called AAP which has a lot of very good people from the middle class. It has done good work in Delhi, setting a record by beating both the Congress and BJP, getting 29 out of 30 seats in the Delhi Assembly. Unfortunately, they do not have money power and muscle power. And the Goan voter doesn’t vote for a candidate if he can’t get something in return. When a candidate visited, the voter would ask “tu amka kitem dita” and would expect  favours like regularization of illegal constructions and of course government jobs. But now with migrant vote banks the value of Goan votes is going down. Now voters may sell their votes if Babush promises them jobs as bouncers and delivery boys for Swiggy and Zomato.