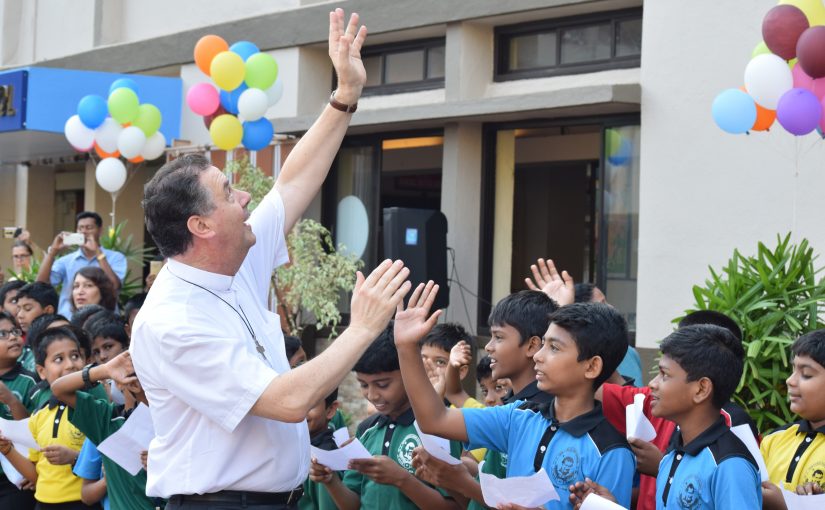 EDUCATION TO FIGHT DRUGS AND TERROR! The Rector Major of the Salesians (also known as successor of Don Bosco) is the head of all institutes of the Salesians of Don Bosco worldwide. The current Rector Major Ángel Fernández Artime is trying to finish the round of all the Salesian provinces of the world before he completes three years as a Rector Major. He worked very closely with Pope Francis before he was elected as a pope. He has visited 87 countries so far out of 134 countries where Salesians are present. This is the 4th time he is visiting India. Interacting with youth at various locations across Goa, the Rector Major said what we sow today, will be reaped in 15 years’ time and stressed on the need to be inclusive across religions to fight terror and on the critical importance of education as a tool to spread peace and eradicate violence and drugs

An exception to the rule becomes a precedent and precedent becomes, in turn, a vicious circle that leads to illegalities being accorded the status of legality. I am fighting alone on behalf of silent sufferers by raising the issue a number of times either in newspapers or by clicking photos of an ongoing 8-floor high-rise building under construction next door.

I’m told this 8-floored building with swimming pool and upper ground floor belongs to casino owner Kanda who will be renting flats to Kashmiris, Delhiwallahs etc.

Significantly, it must be noted that the promotor of the project has been intentionally paying house taxes to municipality and not paying tax to the Taleigao Panchayat.

This anomaly has been complained about to no avail. The new outline development plan (ODP) shows this construction as well as mine and others coming under the domain of the Municipality but the Panchayat is unaware of the reorganisation of administration.

Apparently, this machination is aimed at circumventing the existing regulations and getting a bigger FAR thus violating norms for high rise buildings.

Perusal of plans available at NGPDA show the width of this road as 10 meters, whereas in reality its barely 6 mtrs (see pic) — allowing just two vehicles to manoeuvre with  difficulty. Its amazing how people can pay to make a road an additional 4 mtrs wide on paper. Nobody is bothered about how residents will be burdened by increasing traffic and will be fearful about stepping out! Already heavy traffic due to the construction is taking a toll.

Additionally, soon a heritage building more than 200 years — ‘Bhoot’ bungalow — will be razed so that a huge complex of the Cidade de Goa may come up at this vulnerable Dona Paula precarious hilly junction. It’s also based on a narrow approach street.

Government departments including the Sarpanch, Taleigao Panchayat, T&CP Ministry, Fire and Electricity Departments, and NGPDA including CCP, give permissions blindly ignoring complaints by scientists from NIO, residents of Dona Paula, Bay View residents and Our Lady of Rosary school, Dona Paula, whose students will be impacted forever.  There will be no end to it and older residents will have to think of moving elsewhere or live a traumatized life day in and day out. Dona Paula used to be an idyllic place but this the beginning of the end.

RAHUL Gandhi’s Congress manifesto for the 2019 Parliamentary polls is worth noting. Modi cannot match it! Highlights:

–Rs 6,000 in each family account every month for families earning less than Rs 12,000 monthly.

–33% reservation for women in government jobs and State and Central legislatures.

–A special law on genocide, riots and mass killings.

–One law for GST instead of 3 laws and one rate instead of six. Demerit goods to be under a separate rate. Essential goods will not be taxed.

–Right to jobs for educated youth in urban areas.

–All important institutions to be constitutionally protected on lines of EC.

–SC benches to be set up in six metros of India for cheaper and faster justice. Constitutional matters and matters of national importance to be heard by a special SC bench and will not be burdened by any other matter.

Here is the promise of a birth of a genuinely modern India under Rahul Gandhi!

PRIME MINISTER Narendra Modi is becoming so desperate that he is once again instigating the majority community, accusing the Congress party of insulting entire Hindu community by  linking them to terrorism and coining “Hindu Terror.” He claims Hindus have never indulged in terrorism in India’s entire history and Congress party is insulting Hindus by such terms.

Mr Modi should remember who assassinated Mahatma Gandhi! Isn’t Nathuram Godse the first Hindu terrorist of India who justified his act of assassination post-Independence? Who demolished Babri Masjid in name of personal faith? Who organized Mumbai riots of 1993 and Gujarat riots of 2002? Who attacked Christians, their  institutions, hospitals, schools, priests/nuns in name of  alleged forcible conversions? Who killed Gauri Lankesh, Narendra Dabholkar, Govind Pansare, M M Kalburgi and others fighting such evils as black magic, superstitious  beliefs, hate ideology of communalism in our country? Who engaged in violent attacks and butchering innocent Muslims over beef in the last five years?

Why is Mr Modi portraying these politically pampered home-grown terrorists who go about brandishing trishul, lathi or sticks, guns, swords, etc, in public places to attack its own citizens, especially minorities. The Chief Election Commissioner of India shouldn’t turn a blind eye! It should take serious note and punish all “leaders” garnering votes from majority community on religious sentiments. Mixing religion with politics is openly violating Election Code of Conduct