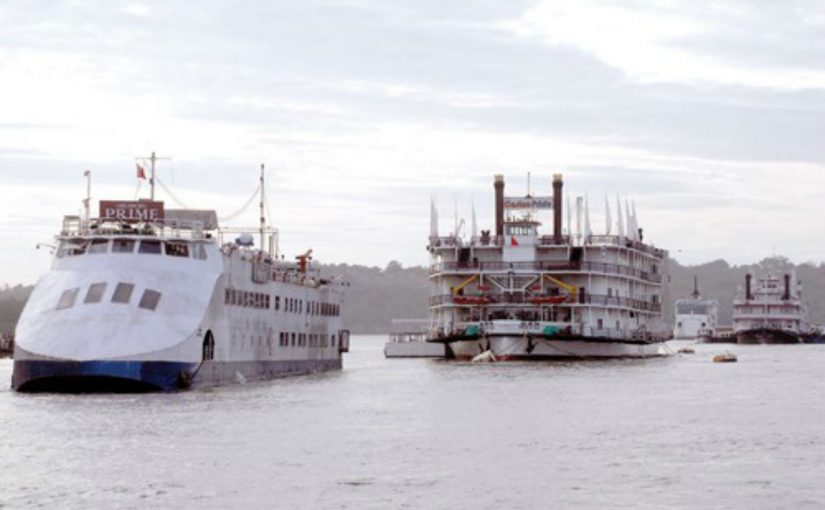 PROMISE: Congress candidate Babush has made a U-turn on his promise that he will get rid of the casinos from the Mandovi river within 100 days of being elected as the MLA from Panjim constituency

Last week’s cover story carrying the photographs of candidates and rating them has brought a lot of accusations. I have been accused of taking money from the candidates. Journalism in Goa has become so corrupt that people cannot distinguish between honest analysis and fake news.

The problem with politicians is that they change their stand on key issues more often than we change our clothes on a hot summer day. Last week Babush Monserrate had promised to remove the casinos from the Mandovi river within 100 days of getting elected. Within two days of our publishing his promise he changed his mind. Clearly the casino lobby has again dramatized that it owns Goa and that every party in the state is in their pockets. They have become such a big monster that nobody can oppose them.
Parrikar had repeatedly promised to get the casinos out of the Mandovi river. But was unable to do so because Jaidev Modi, who owns the Deltin group, is very close to Narendra Modi and Amit Shah. The casino lobby has become so strong that the owners of the Pride casinos are building a mammoth eight-storey building on a quiet residential four-metre-wide street in the Bay View area in Doan Paula, for their staff/guests. Long-time residents who question how permissions were granted for such a structure (that will definitely usher in traffic and parking problems and quite possibly water woes as well) are conveniently ignored.
When Babush has asked why he had changed his mind about the casinos he is reported to have replied that lots of Goan boys and girls will lose their jobs. Not to mention the taxi drivers and the city hotels losing their business. But the ground reality is that the majority of the employees of the casinos are Nepalis. Indeed Rohan Khaunte has discovered that 800 Nepalis working for Casino Pride had registered themselves as voters in the Porvorim constituency where they have been provided with accommodation. If Babush cannot, or will not, move the casinos out, nobody will. The best suggestion was made by the late Manohar Parrikar — to convert the offshore casinos into onshore casinos and shift them to Mopa. But since the future of Mopa itself is in doubt and the south will not accept casinos in the river Sal, they are here to stay.

After the suspension of mining and slowing down of tourism, particularly charter tourism, casinos are the biggest contributors to the revenue of the State. So no party, whether Congress or BJP, is likely to touch the casinos.
Which brings us back to the question of whom to vote for. In his interview with Goan Observer Subhash Velingkar came across as a very decent person. As someone who will not indulge in corruption. If he has the power, Velingkar might be the only one of the horses in the race who would throw the casinos out.
Velingkar’s main plank is to decongest Panjim by taking all the government offices out of it. The permanently resident population of Panjim is probably less than 15,000. But Panjim attracts over 50,00 people a day to various departments of government including the passport office and the office of the civil registrar. Even though the Secretariat has been shifted from the Adil Shah palace to Porvorim, a lot of offices, including the courts, are in Panjim. There are plans to shift the High Court and the district courts to Merces. Velingkar would like other departments like the Collector’s office, the Directorate of Accounts and even police HQ, to be shifted out of Panjim.
Velingkar who grew up near the Mahalaxmi temple believes that if all the government offices are shifted to Merces or Porvorim there will be much less traffic congestion and Panjim will return to being a peaceful city.
The problem is that although the Saraswats will vote for Velingkar not a single member of the minority community will. This is because he is adamant on withdrawing grants to English primary mediums schools run by the church.
Nobody off course will vote for Sidharth. He has made a mess of the ‘Smart City’ project which has been digging up Panjim long after the deadline. April 30 was the deadline for digging roads to start maintenance work to prepare for the monsoon. There are also charges of corruption against Sidharth. The people of Panjim are tired of 25 years of degeneration under BJP rule anyway, and any BJP votes will go to Subhash Velingkar who headed the RSS before he split with Parrikar.
The only choice is Valmiki. Valmiki in the tradition of AAP has sworn in an affidavit that if he wins the election he will not join the BJP. Which is very commendable given that Vishwajit Rane joined the saffron brigade soon after the BJP form the government and two other Congress MLAs, Subhash Shirodkar and Dayanand Sopte, joined the BJP later.
This is the first time any candidate has given an affidavit that he will not do party hopping and we hope this becomes more common.
The problem is that people have lost their enthusiasm for the AAP. The party has done very good work in Delhi. Recently it proved that it had improved the quality of government schools which is reflected in HSSC results of over 80%. The AAP has started ‘Urban Health Centres’ which really work, unlike Goa’s Primary Health Centres. AAP has even brought down the power tariffs in New Delhi.
Unfortunately none of the achievements of AAP are known to Goans. Even if Goans are aware of the good work AAP has done, they may not vote for Valmiki thinking that since he had declared that he won’t join the BJP, he won’t be part of the government.
AAP can do things in Delhi because it has almost 90% if majority in the assembly. Even if Valmiki is elected he will not be able to achieve much as he will be the only AAP MLA in the Assembly. For people with a conscience the choice is between the devil and the saffron brigade.