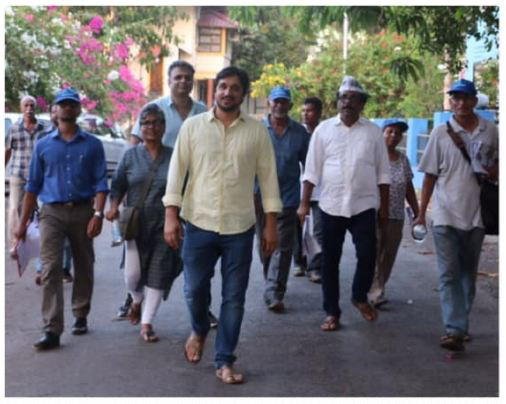 WALKING THE STREETS: Aam Aadmi Party’s Valmiki Naik on a door-to-door padyatra appealing for votes for cleaner politics in Panjim… “I see the Congress as just a BJP agent…they will fight amongst themselves but for the power they will come together in weird combinations. This nonsense must stop”

The Aam Aadmi Party younger generation of professionals, seeking more honest, cleaner and people-oriented politics for Goa and the rest of the country are not bogged down by historical ideologies of the past or grand Hindutva dreams of the future, says Tara Narayan. Life would be so much more worth living for the many if only as a people we stop being corrupt!

SOME folk get intimidated by the Aam Aadmi Party’s Valmiki Naik and think he is arrogant. They are wrong! Valmiki Naik who is fighting the forthcoming Panaji byelections as AAP’s candidate is hassled on a hot steaming day post-lunch, but he tries to clean up the paper clutter in his office, switches on the air-conditioning, before inviting me graciously to take a chair to share some thoughts about why he is an AAP politician — because he loves his home state of Goa with his heart! He would like to preserve the State’s identity, culture and environment in all the ways he can.
Ponjekars who share his vision of Panaji in future may vote for him in the Panaji by-elections coming up on May 21, 2019. As AAP’s candidate he is seeking cleaner politics — eliminating corruption is a primary on the AAP manifesto. From the sound of it AAP politicians are going to be a refreshingly different breed of politicians if they win elections in Goa or capital Delhi or state after state…they will usher in a more professional politics.
Valmiki’s slogan is “Hope & Honesty” — quite simply they are seeking a cleaner, more people-oriented politics for the country. Say he is just yet another decent professional who came back from abroad — a Master’s in civil engineering he spent 10 years in the US of A (Texas and California), then decided he did not want to continue to live the good American life, trade in his Indian passport for an American one…he returned to family and friends in the hope of living happily ever after in Goa.
But like the rest of the country Goa too is tainted by mega corruption, making life miserable for the aam aadmi Indian who is constantly fleeced without any commensurate improvement in the quality of public life. All of us are affected by bad governance (except the government of the day which rarely lives up to promises made to voters before being elected to power and incredible riches). Clearly an educated and disgusted Valmiki Naik saw in the Aam Aadmi Party movement a ray of hope. He joined the movement for a corruption-free India and like so many other young professional like him he is seeking a cleaner political environment — as much for himself as the people of Goa and India.
Many young people today think doing politics is a great business opportunity — personal business upfront, to make loads of money for self, biwi and bache at public expense. But the AAP officeholders and representatives have already proved themselves to be different, they’re not on a “it’s all about money, honey, trip!” In fact, remembers Valmiki Naik, AAP was born with Anna Hazare’s movement against corruption in government, Arvind Kejriwal and many of them joined in the protests, writing letters, fasting, etcetera. It was when all such passive efforts failed that Kejriwal, Manish Sisodia and others who shared common cause for better politics, decided to make it a political movement.
THE greenhorns of the Aam Aadmi party have come a long way in learning and understanding the inside out of politics in India and are no longer political innocents. He says, “Goa’s identity, culture, natural beauty…is precious! It’s our love for Goa which will make it happen…if you want a change for the better you have to participate to make it happen!” Valmiki offers Delhi as an example of what Goa can be like…in four years the AAP government has won the hearts of Delhites and is now in a win-win situation — AAP has delivered “85% of the promises made in our manifesto!”

Take a look at the AAP manifesto, he urges, “It never changes, our manifesto is our Bible, Gita, Koran!” They take the promises they’ve made to their voters very seriously and in Delhi the quality of life of the aam aadmi has improved tremendously and is internationally praised. A lot yet needs to be done of course but if it can happen in Delhi it can happen in Goa too — only if more Goans take a fresh look at AAP and vote for them. It’s been a slow and steady fight to win respect amongst voters and AAP has educated aam aadmi about how the government works and “the need to stop being sussegad if Goa’s identity and heritage is to be saved.”
Of course Goa’s identity has been under attack with the current dispensation which is the Bharatiya Janata Party (BJP) — we have seen for ourselves the levels of corruption, the casino culture coming in along with other evils associated with a casino culture, the pollution of the river Mandovi, the uncontrolled migration of non-Goans, the mining story of exploitation, the constant compromising with the CRZ — “this is because the BJP takes its orders from Delhi and Delhi doesn’t see Goa as a special place in India…Goa is only for exploiting natural resources!”
All that the BJP has done, says Valmiki Naik, is turn Goa into a state of “white elephants…for example they’ve spent 50 crores for a car parking building at the jetty which nobody uses, that’s a white elephant. Another pukka building is now coming up to cater to casino business right on the river at Captain of Ports wharf…Rs 300 crore is being spent on catering to casinos!” There are so many lobbies anxious to destroy Goa! If he wins in the forthcoming Panaji by-elections all this will be of concern to AAP naturally. The irony is that the BJP’s annual budget of15,000 crore has `300 crore to give back to casino infrastructure but little money for streets maintenance or taking care of the monumental garbage situation and other far more important issues like water, electricity, improving public transport and other services to improve life in Goa for common people. Since AAP’s ideology draws strength from the people and is people-oriented there is no question of joining hands with any other party and least of all the BJP….
Valmiki Naik sees the BJP-Congress-MGP-Goa Forward as a big ghatbandhan to stay in power for larger slices of the cake! Contrary to other opinions he is positive, “This time I believe Ponjekars have seen through BJP-Congress/Babush Monserrate game plans… Babush has a history of betrayals and he has no patience. Babush in Congress clothing is still Babush! He will jump to whatever side convenient to be a minister. Vishwajit Rane is like him. They is no party loyalty or loyalty to any ideology…Babush or Sidharth Kuncalienker, both talk of re-developing Panaji into an endless construction boom!”
Of course if the people give AAP a chance to prove itself as a party with a difference it will undo all the random mess up of Outline Development Plan, Coastal Regulations Zone ….redress all issues along a planned manner and in consultation with what the people of Panaji want.
Valmiki appeals to voters, please see through the Congress-BJP combo theatrics which have turned Panaji into a nightmare, “I live in Panaji and I too suffer on a daily basis along with other Ponjekars!”
Yes, he reiterates, “I see the Congress as just a BJP agent…they will fight amongst themselves but for the power they will come together in weird combinations. This nonsense must stop for it is at the larger cost of people’s aspirations and hopes….”
So there you are, if you’re asking me, I too sympathize and empathize with the Aam Aadmi Party and see it as a serious option this Panaji by-elections and if they win, says Valmiki Naik passionately, “We will be like a shock wave to politics and we will make positive changes for a better Panaji to live in.”
Come to think of it as a Ponjekar I would place my bets on AAP and Valmiki Naik — just because this by-elections is the final call for Ponjekars’ to help rescue their beloved Panaji from the clutches of….a deadly combination of business-minded politicians! Political power in a democracy is a people’s trust and never meant to be abused as a business for private profiteering.