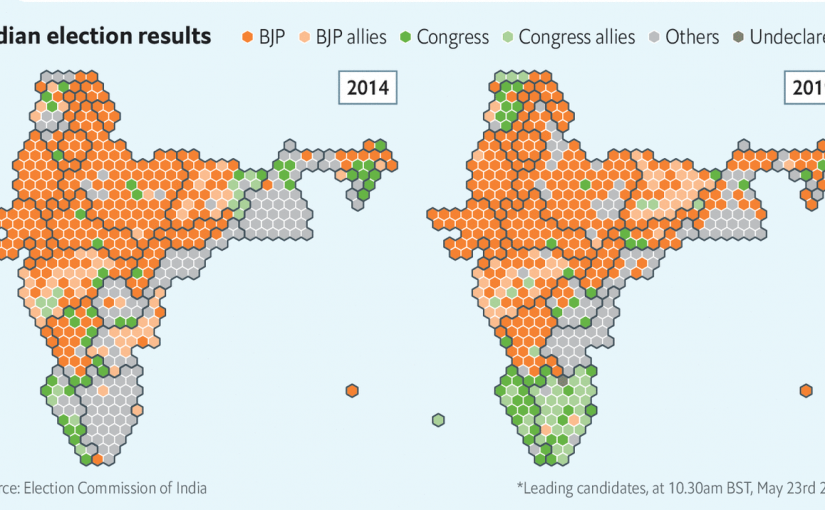 Kanhaiya Kumar (CPI-M) lost despite being the popular choice of the youth and working class. His lack of political expertise made him fall behind in essentials like booth managers, etc, say local political analysts

Contrary to Modi’s 2014 slogan of ‘sab ka saath, sab ka vikas’, masses of people — mainly Muslims, Dalits and farmers — now find themselves almost totally alienated, yet the Hindutva agenda and the ‘threat to nationalism’ have given Modi a resounding victory yet again. It is time for the BJP’s opponents and liberals everywhere to introspect

The BJP, conforming exit polls, has swept the Lok Sabha elections. It crossed the 300 mark on its own, which means it does not need the support of its NDA partners to form the government. Both Modi and Amit Shah contesting from Varanasi and Ghandhinagar have won by huge margins.
The NDA has got more than 350 seats, of which 300 plus is the share of the BJP. In sharp contrast the UPA has been able to get less than 100 seats. To the shock of the Congress, Rajiv Gandhi lost the Amethi seat to Smithi Irani, though he won the Wayanad seat in Kerala which he had contested as a second option.

The biggest disappointment is the mahaghatbandhan of various opposition parties which did not get the numbers they expected. The BJP wave seems to have been so strong that it got the majority of the seats even in Rajasthan, MP and Chhattisgarh where the Congress had won the Assembly elections recently. Not surprisingly it got 100% of the seats it contested in Gujarat, and 90% of the seats in Bihar, thanks to its alliance with Nitesh Kumar as part of the NDA. The entire Hindi belt seem to have voted en masse for the saffron brigade.
The SP-BSP combine manages to offer some resistance to the BJP in UP which with 80 seats makes up the biggest block in the Lok Sabha. Unlike last time when the BJP got all the 80 seats this time around the Mayawati- Akhilesh combine manage to get 26 of the 80 seats.

The saffron wave has not been able to cross the Vindiyas and penetrates the south. The DMK in Tamil Nadu won 34 seats keeping out the BJP. Similarly in Andhra Pradesh YSR Reddy ensured that all the Lok Sabha seats were captured by the UPA. The situation is not clear in Telangana whose CM Chandrababu Naidu had played a major role in bringing the opposition together. The Telugu Desam Party of Chandrababu Naidu has been virtually wiped out. BJP managed stage a comeback in Karnataka but lost heavily to the Congress-CPM combine in Kerala.
Except for the south and parts of UP the BJP seems to have improved on its performance in the 2019 Lok Sabha elections. It is obvious that ‘Khan market set’ (which is a metaphor for the elite) have lost touch with the majority of the mass of semi-literate and illiterate voters. This is dramatized by the fact that even terror-accused Pragya Thakur has won the election from Gorakpur. No doubt now all the cases against her will be withdrawn. With Amit Shah’s margin of victory in Gandhinagar (where he pushed out LK Advani) he will become even more dictatorial.

It is going to be a difficult time for liberals and those who believe in the concept of a secular liberal India. Perhaps the results should not surprise us considering that there is a world wide trend towards the right. As dramatized by the victory of Donald Trump in the US who might, like Modi, get a second term as president. Perhaps we have taken the masses for granted too much. The semi literate Modi seems to have much greater empathy and support of the masses in the country than the highly educated leaders of the Congress.
Balakot and the 56-inch chest, which has probably grown to 72, will probably see a more assertive and intolerant BJP government run by Modi and Shah. We have to watch and wait.