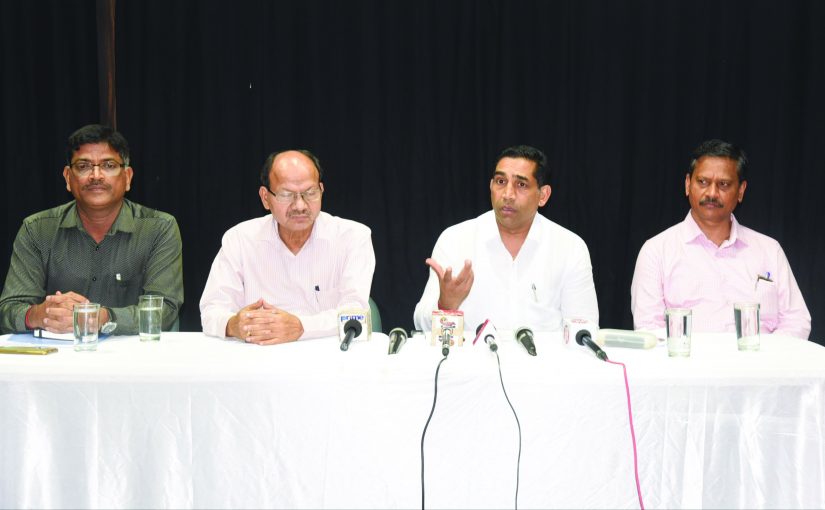 PRERANA DIN: Minister for Tribal Welfare, Shri Govind Gaude briefed the media regarding “Prerana Din 2019” to be held at Ravindra Bhavan, Curchorem on May 25, 2019. To mark this occasion, ‘Adiwasi Pradnyawant Puraskar (awards)’ will be given to tribal people in honour of their contribution in the fields of Education, Sport, Agriculture and Art and Culture. Also seen are Chairman of Goa Commission for SC/ST, Shri Prakash Velip, Chairman of Goa State Scheduled Tribes Fin. Dev, Corp. Ltd., Shri Durgadas Gaude and Director of Tribal Welfare, Shri Venancio Furtado

COLLUDING TO FLOUT ALL RULES

THE BJP has successfully managed to polarize India along communal lines and guarantee the votes of our majority community by forever projecting them like victims — raising issues like construction of Ram Mandir, Love Jihad, cow slaughter, forcible conversions, etc. And portraying minorities as anti-nationals if not real enemies or major liabilities of this country.
Our majority community is historically non-violent, tolerant and very religions and taking all this into account the BJP leaders have successfully taken advantage and hypnotized them during elections time for political gains. Distorting nationalism by pretending to fight to uphold the rights of a particular community alone and due to which it is devotedly voting for BJP alone.
If Prime Minister Narendra Modi and BJP won more than 300 seats on its own in the latest Lok Sabha elections for the second consecutive time (just like in last Lok Sabha elections) then it is solely due to above mentioned facts as also arrogance/casual approach of all Opposition parties who failed miserably to take full advantage of this crucial elections — due to petty, selfish egos and infighting, dreaming of becoming king-makers if not prime minister after election results.
When will our Opposition leaders really unite as a strong team and expose the common enemy, namely communalism which is on the verge of destroying Indian democracy? After seeing the massive support for BJP in most states in latest Lok Sabha elections I feel that people in this country have slowly started thinking like communal fanatics and looking at their fellow citizens not based on nationality but their religion. Are minorities now going to live like second or third class citizens in this once great secular country? God save India! Jai Hind!
— Jerry Fernandes, Saligao

MOVE ON PANAJI!
I COMMEND the voters of Panaji for having the spine to lay to rest the very corrupt and arrogant BJP’s Sidharth Kuncalienkar. Our task now is to ensure he is prosecuted for all his acts of omission and commission and all his ill-gotten wealth attached and reverted back to the State. I thank God for having ensured that my 59th birthday on May 24 became an occasion for greater celebration – the end of Manohar Parrikar’s illusory legacy. Goa now needs to move on and let us make Panaji truly smart.
— Aires Rodrigues, Ribandar
HISTORIC WIN
THE overwhelming win of the NDA-led by Prime Minister Narendra Modi is a historic win. This decisive election will propel India’s growth. We at the Confederation of Indian Industry (CII) congratulate the NDA on its landslide victory. The sweeping referendum truly redefines the destiny of the country and makes this India’s century.
Industry is tremendously excited for Modi has changed the lives of hundreds of millions of citizens driving a new template for development. With the mandate for another five years India is on the fast track…this is a win for India, India’s people, India’s development. Game changing reforms such as introduction of Goods & Services Tax (GST), Insolvency & Bankruptcy Code, lowering of tax rates for small enerprises, ease of doing business and so on have created the right environment for industry to flourish. Spectacular achievements such as Jan Dhan Yojana, distribution of gas cylindars, complete electrification of villages, construction of 1.5 crore houses, quick progress in roads and highways show dedicated commitment of the government. Transparency and rule of law while weeding out corruption has been the main pillar of the government in the last five years.
— Vikram S Kirloskar, president, CII

BJP’s Development!
Today, Delhi is still the most polluted capital in the World! In 2017, China built the world’s biggest air filter -100metres tall- capable of cleaning surrounding air around 10 sq. Km. The same is solar assisted and capable of filtering PM2.5, sulphur dioxide and other pollutants responsible for smog!
Is anything being done on this front in Delhi, besides politics? PM Modi travels the world, including China, but copies only bullet trains! He then built a 182M ‘statue’: for what purpose? Mind you, they imported 1800 tonnes of bronze panels from China — and in the same breath, ask the Indian Public not to patronise Chinese goods! If the BJP wanted to really show their mettle, then the Statue could have come up in Delhi and doubled up as an air filter! Alas, it is the BJP in power.
In 2017, China built a 150MW solar farm — ON AN ABANDONED COAL MINE — WHICH, AFTER COLAPSING, TURNED INTO A LAKE! China now vows to spend $360 billion dollars on clean energy ad create 13million jobs in this field by 2020! From being a highly polluted country, they are moving away from the same AND creating jobs! All know the BJP’s report card on the jobs front!
What about BJP in Goa, who even boasted of an IIT CM? Yes, they built hundreds of 22 m tall towers all over Goa — that too in traffic islands that do not need expensive security as the Traffic Police provides the same (gratis or underhand expenses?) — for Wi-Fi so that a single businessman profited. Whither MRTP? China had first buit 23 m air filter towers. Goa’s traffic islands could have been put to better use. Goa is ‘cursed’ with a large number of huge abandoned mining pits which are below the water table and therefore hold water. Floating solar panels get cooled by the water and exhibit higher efficiencies besides preventing evaporation! What an Idea! Alas, this is not the slogan of Reliance, and it is the BJP which is in power! Singapore converts plastics like chips packets to power besides ensuring the toxic waste is treated in towers that finally emit 1 micron PM as against the PM of 2.5! The toxic ash is ‘sunk’ under water on a man made island where the water does not mix with the sea. All this in one single day!
PM Modi never knew the Ganges was polluted in all the years he was CM of Gujarat — till he stood for elections in 2014 from Varanasi! Till now, more than 3000 cr have been poured into the Ganges, but no sign of any improvement? If he could bring in bronze panels from China for the ‘Statue’ why not ask China to ‘filter’ the Ganges? Because the BJP is only wasting precious reserves on a figment of its imagination!.
— R Fernandes, Margao

WHAT DOES IT SAY?
What does it say about our fellow Indians whe hate and terror win? What does it say about our brothers-and-sisters that they would rather choose a leader who followers abusive trolls on twitter; whose followers stand for hate and violence; whose party officals garland killers; and who by his silence encourages polarisation and division.
I can understand candidates like Kanhaiya Kumar losing because he was controversial and untested. But what about Atishi? She asked her opponenet to fight her and debate actual issues, but instead her opponents made her surname ‘Marlena’ a poll issue and she was forced to keep clarifying that she was not a Catholic and that her surname was given by her parents as a tribute to Marx and Lenin.
The Indian voter has consistently shown that star power will blind them to actual work and worthy leaders. Defectors, the corrupt and even the outright criminal have won. Ever Pragya Thakur won! India should hang its head in shame.
Truly, we deserve our leaders and we deserve all that comes in the next few years.
— Blaise Dias, Panaji