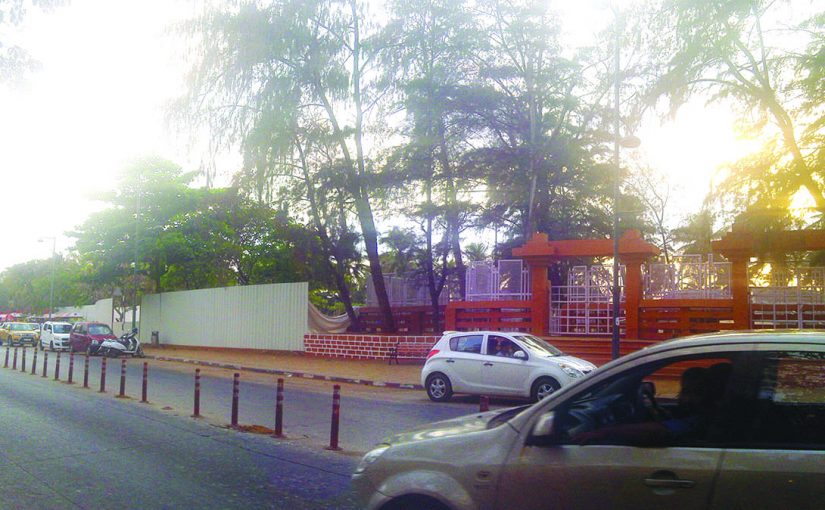 Miramar beach is Panaji’s one and only city beach for aam aadmi rest and recreation… desperately seeking tender loving care, but no samadhi blocks please. That’s the general opinion of Panaji residents

We asked around in an impromptu poll if there should be another memorial at Miramar beach and most folk said, No! Not even for late, much loved Chief Minister of Goa Manohar Parrikar….

Manohar Parrikar is a killer of democracy and doesn’t deserve a statue. I went on hunger strike for 12 days for him to resign but he hung on to his chair for one and half years…Parrikar was a selfish man. He was not like Bhausaheb Bandodkar at all who was a totally different kind of man, Bandodkar was a leader of the masses. I am against any statue or memorial for Manohar Parrikar anywhere!
— Rajan Gadge,
RTI activist

No, not at Miramar beach. There are umpteen other places where they can build him a memorial. Just because one memorial is already there it does not mean they have to repeat it! A beach is for a purpose, for people to relax, swim, spent some time there, but the beach is unmaintained. Children play volley ball with empty bottles…if I have to walk with shoes on down a beach it is not a beach for me.
— Adolf Fernandes of Freedom Holidays

I am of the view that nothing should come up on that side of the road. That is Miramar beach side from where it begins at Aivio village right down to Miramar beach circle – GTDC Residency…area on beach side of road should be developed purely beachside recreation grounds for public and should be public-friendly. If more samadhi come up imagine a beach full of samadhi of all chief ministers of Goa!
— Anand Madgavkar,
Dona Paula resident

I don’t know where our beach is going away! We don’t want any construction down Miramar beach, this is the place where we spent our childhood playing in the evening, we were always going down to Miramar beach and want our children to have fun there. Memorials are not meant to be built along beach but up on some higher land! Beaches are meant for recreation for everyone young and old, I don’t want beaches to be blocked up for any memorials.
— Pragnya Naik, Housewife

Miramar beach was wonderful because unlike most beaches which are hidden away, it was part of Panjim city itself. Even without transport it was easily accessible. Unfortunately it is paying the price now and is being used as a funeral ground for politicians by other politicians trying to get political mileage and win votes from supporters of the deceased. Forget a new memorial for Parrikar, I think even the existing memorial should be renovated and made more child-friendly and opened up to the public.
— Nikhil Desai,
Student

I don’t want to see more useless concrete structures on the beach or anywhere! If they must have a memorial for Parrikar, why can’t they make something practical and useful. Let his followers collect funds and build a hospital or school in his name! They can have a big statue of him in the front and people will actually remember him gratefully.
— K Mascarenhas,
Entrepreneur

I’ve grown up in Miramar and I’m sick and tired of seeing them destroying the beach. I remember in my teenage days seeing older college kids using the Bandodkar samadhi to smoke and drink in secret. Don’t build more walls on the beach please. It’s meant to be an open area. if you must build a memorial to Parrikar make it an open playground and then make sure it is well maintained!
— R D’Souza,
Artist