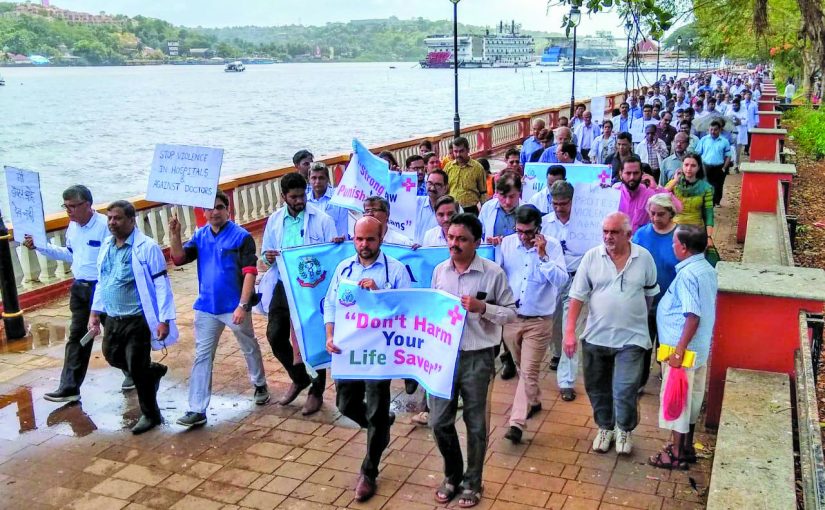 DOCTORS IN PROTEST MODE: Dr Shekar Salkar and others handing over a memorandum to Chief Minister Pramod Sawant after the protest march; Opposite the old GMC several doctors spoke up about the increasing incidences of violence against doctors; The rally started from Azad Maidan and concluded opposite the old GMC Complex, Campal promenade side

With an increase in violence against doctors it is clear that public perception has changed. Patients and their kinsfolk no longer see the medical profession as “mai-baap” or “bhagwan”— as was the case in the old days when a doctor’s word was sacrosanct and respected by a majority of patients seeking medical treatment for a myriad ills in hospitals across the country. With the recent incident of a team of doctors being seriously injured in violent repercussions after a patient died in West Bengal, doctors across the country are protesting and demanding protection against vengeful and combative aggression of patients’ families and their political mentors when a tragedy takes place…

IT’S not the first time it has happened. A patient dying amidst complaints of medical irresponsibility or wrongdoing and patients and extended family seeking revenge. In fact, increasingly patients (especially those with political connections) or their angry relatives are taking the law in their own hands in metering out quick justice as just justice! The revenge for perceived or not perceived medical negligence was particularly brutal in a recent incident which happened in West Bengal and it sent ripples of fear amongst the medical fraternity at large across the country.
In state after state, medical councils and associations are calling for protest strikes, morcha, demanding protection for doctors, as also stringent laws to punish anyone inflicting injuries on any medical professional in public or private hospitals or clinic. Reportedly, laws do exist in some states but they’re not being implemented. In capital city Panaji over a 150 doctors assembled at Azad Maidan on Monday morning at 10 am on June 17, 2019, to have a peaceful rally walk up to the old GMC complex, carrying placards and banners highlight their grievances. They were expressing solidarity with the incident of medical interns and doctors being thrashed by goons after an old patient died because of cardiac failure.

The question arises: Are today’s doctors justified in their anger in seeking protection from patients’ vengeance when things go wrong? Or are they just spooked scaredy-cats? In their white coats and black bands on arm about 150 doctors from across Goa walked from the Azad Maidan to the old GMC down the Campal promenade to express their distress about what has happened in West Bengal and such violence against doctors who traditionally are perceived as “saviours”, but perhaps no longer for reasons which need to be studied and rectified (or so some members of the public who’ve suffered at the hands of doctors’ insensitivity and negligence say).
After a short public presentation a team of doctors led by Dr Shekar Salkar, Dr Anil Mehndiratta and others proceeded to hand over a memorandum to Chief Minister Pramod Sawant in his office. Violence against doctors doesn’t happen commonly in Goa but after the West Bengal incident doctors don’t want to take any more chances. The fear that it may start happening in a hitherto peaceful Goa was palpable although during the walk a scene of bonhomie and camaraderie ruled.
As some members of the public and doctors’ well-wishers joined in the walk some serious concerns were expressed. Apart from the IMA doctors there were Goa Ayurvedic doctors led by Dr Sneha Bhagat, Goa Homeopathic Association doctors led by Dr Domnic Dias, Nursing Association representatives, Nilesh Bagkar of the Chemist and Druggist Association and Goa Dental Association’s Dr Chandarsekhar, Physiotherapist Association’s Dr Bhatikar, NGO representatives of Lions and Rotary clubs and others.
With the large contingent of young doctors were senior veterans like oncologist Dr Shekar Salkar, Dr Armando d’Silva, Dr Alka Sardessai, Dr Anupam Kudchadkar, Dr Kedar Padte and others. Manipal Hospital and GMC doctors as also private practitioners wearing their white coats and black bands on their arms reinforced the view that the time has come when doctors need protection as also the law punish those who target doctors for revenge for whatever reasons. There are no two views about this: All forms of violence are abhorrent in a civilized society and in no way can thrashing doctors for perceived misdeeds be justified. Both public and government need to take cognizance of this.

Says Dr Deepak Lotlikar, “We need a strong law to deter people from taking the law in their hands…the current law is not strong enough. One deterrence would be to deprive the violators of government schemes which benefit them and in some cases there should be a penalty of seven years imprisonment at the minimum.” Violence against doctors cannot be justified under any circumstance. How will doctors ever be able to work in good faith and apply their minds to saving life if they are all the time under the scanner of perceived faults?
Dr Schuyler Pereira added, “There should be a law to sa8feguard doctors when medical events like what happened in West Bengal take place. Let those who engage in violence be punished. It is a sad day that doctors need protection!”
According to Dr Aditya, “I am third generation of doctors in my family, my grandfather was a doctor, so was my father and it was after seeing them and the respect they earned in society I too decided to be a doctor too….we save lives mostly but mistakes happen and for this the reward should be a beating up?” It is unfair to judge doctors when something goes wrong for in the treatment of a patient sometimes things do go wrong and a doctor is helpless in saving life.
Dr Vishnu Sheldekar from Curchorem said it was unfortunate that today “doctors have turned from lions to sheep!” In medical practice, he added, it is “not 2 x 2 equals to 5. In serious cases anything can go wrong and despite the best of treatment and effort of doctors there is destiny…”
Unfortunately, many doctors confess that over the years patients have taken to cross-questioning their doctors about treatment when a death occurs and this attitude is reprehensible, “there is definitely a change in attitude in patients today.”
Are the doctors aware that the incident in West Bengal took an ugly political turn? Dr Armando D’Silva, commented, “I don’t think we in Goa are politicizing this issue. I’m not here in this rally because of politics but I think I’m fighting for a good cause and that is safety of doctors.”
The doctors participating in the rally had come from different parts of Goa, both those working in public hospitals as well as private practitioners, about 40% from Margao alone. All of them are concerned about the fallout of what has happened in West Bengal.
In Maharashtra, said Dr Noel Britto, “a year back in a clinic in Dhule a patient died and ruffians came and ransacked and thrashed the doctor.” In Maharashtra something like 53 incidents of violence against doctors have been documented. Soon after the Dhule incident a law to safeguard doctors against violence was enacted, “but it only on paper, it is never executed by police at ground level.”
Many doctors also say health should be a Central and not State subject, then perhaps laws would be better implemented. If other countries have laws to protect medical practitioners from violent scenes of revenge when a patient’s treatment is not successful, there is no reason why India cannot have such a law. As it is there is a brain drain of doctors who prefer to go away abroad to practice, there is a very real fear that more will join this band if doctors feel insecure and fear for their life in the context of a growing Indian scenario in which doctors are targeted — when limbs are amputated or a patient dies or a treatment fails for want of oxygen or ventilator…and somebody in the patient’s family wants to punish the doctor /hospital concerned!
The general public needs to be educated, endorses Dr Amol Mahaldar, “When things go wrong in hospital, patients’ relatives don’t have to seek revenge against us! There are so many ways in which they can seek justice like reporting to the State Medical Council, file a civil or criminal case in court, approach the Indian Medical Association….because of the growing incidents of violence being unleashed on doctors, we are concerned and putting our own house in order.” For example, Dr Mahaldar said, last year they had programs to improve doctor-patient communication and they are also trying to improve doctor to doctor communication, “so that there is less room for misunderstanding when a tragedy unfolds in hospital.”
All this notwithstanding at the Goa Medical College & Hospital GMC, some steps are already in place to nip trouble in bud. The hospital’s casualty area is under CCTV surveillance and if there is any trouble or violence in Casualty or OPD they also have staff to deal with it promptly. From the sound of it doctors in mainstream medicine are now aware of how sensitive the issue of doctor-patient relationship has become and since increasingly the outcome is turning violent — they see no other recourse than to protect themselves in whatever ways they can, regardless of whether the government of the day does anything or not.