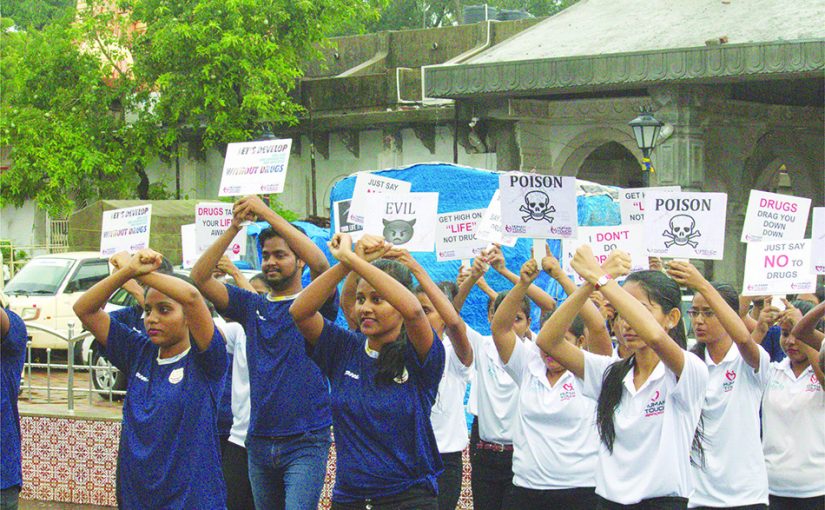 SAY NO TO DRUGS!: As part of spreading its anti-narcotic campaign on the International Day Against Drug Abuse, Human Touch Foundation and Fr Agnel College in collaboration with Goa Police and Narcotic Control Bureau organized a flash mob in Panjim, Calangute, Mapusa, Anjuna, and Vasco and Margao. The inaugural flashmob was held at Panjim and was attended by Mr Rajan Kumar, Superintendent of Police, NCB, PI Panaji, Tulshidas Naik and Peter F Borges, CEO of Human Touch Foundation, who spoke on the occasion. The flashmob was performed by NSS Unit of sociology of Fr Agnel College, Pilar under guidance of Ashwin D’Souza, NSS Officer, Basavaraj Katti, Program Associate at Human Touch Foundation and team. It was held with support from Narcotics Control Bureau, Rotary Club of Panaji Riveira, Estrela Do Mar Hotels and Resorts, Taj Resorts, Benaulim, Fairfield by Marriot, Anjuna. The flashmob was enthusiastically choregraphed by leading Zumba instructor, Priya Almeida of Brand Me!

There was a complaint pending against Administration Director of Health Raju Gawas regarding harassment of staff.
We at the Shiv Sena had demanded an inquiry against him for being responsible for the suspicious death of Mahesh Desai from Siolim. The Government Employees Association has also blamed Gawas for the death of Mahesh Desai due to harassment. The said issue was sidelined due to elections and the victim was deprived of justice. The Government encourages officers like Gawas by not having initiated any sort of enquiry against him. Recently he was transferred on June 18, 2019, which appeared in Govt. Gazzatte on June 20, but on the very next day i.e. on June 21, he transferred some employees of Health Dept (violating the transfer guidelines) just to take revenge. Further Gawas threatens and takes revenge by transfers to distant places.
According to the transfer guidelines of the department, transfer of Group ‘D’ and ‘C’ employees will be limited within the Taluka of their present posting, or to nearby talukas. A Mr Thomas has been transferred from PHC Aldona to PHC Sanguem. Sanguem is in no way neighbouring Bardez taluka where he is posted presently. He stays in Pernem and had requested mutual transfer from PHC Aldona to District Hospital Mapusa. Request letter was jointly signed by other two replacement drivers.
We demand that the government should immediately cancel these transfers to prevent any untoward incident with Thomas similar to deceased Mahesh Desai. Such type of revengeful activities should be immediately stop to improve working atmosphere within the department. Mr. Thomas has submitted a petition in the court on Monday. We demand an inquiry on Raju Gawas within 15 days failing which the Shiv Sena will decide it’s further course of action. We will not keep quiet until the Government deals with this matter seriously.
— Jitesh Kamat, President, Shiv Sena, Goa

MOHAN RANADE, RIP
WITH the death of Mohan Ranade Goa has a lost a true and sincere friend. He lived for many years in Ribandar and I was privileged as a student to have many vivid interactions with this great, knowledgeable gentleman who always lived a very modest, simple life. Very unassuming at all times, he always spoke fearlessly. He was one of the pillars of the freedom struggle that liberated Goa from colonial rule in 1961. Mohan Ranade was a brave, ferocious warrior. A fitting tribute to him would be to vow to liberate Goa once again from its currently selfish, power hungry and corrupt politicians! Through their acts of omission and commission they have brought our once beautiful and serene Goa to the brink…of disaster.
— Aires Rodrigues, Ribandar

SAY NO TO RAIN WATER HARVESTING!
Sounds crazy, what with 4 major cities in India facing water crisis? But, not so. Rain water harvesting must be banned in certain areas. The Pollution Control Board has given clearances to divert rain water directly into the water table/aquifers. In Goa garbage is strewn all over and with open defecation how can we resort to rain water harvesting?
Imagine if water flowing through the Sonsoddo garbage ends up in the water table? WHO has banned the use of any water source for drinking if it tests for positive for E-coli. It means our entire ground water may become unfit for human consumption.
What about water from highly chemically polluted Cuncolim Industrial Estate? Selaulim water is polluted with manganese beyond permissible concentration, carried by rain water flowing through iron ore dumps. To date the government has done nothing to change the treatment process for removing the same. High manganese in drinking water leads to mental deficiency.
We need to immediately earmark all such areas which have high salinity and ban the harvesting of surface water. Roof and terrace waters may be used only if proper filters with back washing facility and responsible people duly trained and certified are in place. Unscrupulous illegal mining companies harp on proper placement of dust sensors at Pilerne Industrial Estate, they need to be banned from rain water harvesting until required qualifications are met. In Pilerne four industries including Berger Paints had their sewage directly enter the PWD bore well. What a crime! All 5-star hotels extracting water through bore wells must be similarly be banned and fined for bringing in saline water to local wells.
Direct replenishment of water table with a token filter is a short cut. How does nature replenish water table? Water is allowed to seep very slowly through various strata of soil and never directly into ground water. Excess water that does not have the time to filter through, runs off to rivers. Directing water into the ground water table, bypassing various strata, will make for more ground water but risks contaminating the entire water table.
The present approved systems for ground water harvesting through bore wells makes use of pathetic sand filters in a concrete tank. Sand filters trap sediment only when it is coarse and jagged. After some sediment collects no filtration takes place. Filters have to be regularly cleaned by forcing water in reverse flow to flush out trapped dirt. Sand also has to be changed at least once in two years or less. Moreover, this sand collects pathogens and must be sanitized with high ppm chlorine! Further, the thickness of sand bed has to match the incoming flow: Too thin a bed will channel water through without filtering. This is not done by any rain water harvesting systems suppliers. Note that all these methods only filter debris, not pathogens and harmful toxic dissolved substances, not even colour.
We must map areas which can use surface water or only roof top water. The type of water harvesting must be defined as also training and certification of people operating the system. All societies must be made to use water harvested for their own use.
The GSPCB has many times proclaimed that they do not have the manpower to check ETP discharge of companies! Who will check the rainwater harvesting to ensure integrity of our ground water? Mega complexes keep concretizing Goa. Such complexes must perforce be made to have enough holding tanks and filters for rain water harvesting. They don’t even have open space for parking, generators, etc, yet they have swimming pools using huge quantities of precious water.
All corporates/companies to have their head take a public pledge that they will operate within the limits of law and resign if proved otherwise. Ensure no open defecation. All hotels/big restaurants must have their own STP. Note: TTAG’s white paper speaks nothing of their responsibility: Only what they want gratis!
— R Fernandes, Margao

TREE PLANTATION
Van Mahotsav will be observed this year from July 1 to July 7. This year schools, colleges and households should make it a point to plant saplings of coconut, cashew, jack fruit, papaya, chickoo, custard apple and plantain; typical Goan trees so that not only will green cover of increase but also the produce will be available at cheaper rates. Saplings of the best varieties can be obtained from ICAR, Old Goa so that quality products are made available. Every college, school and household should observe Van Mahotsav as a means of greening Goa in all available cultivable areas so that these produces of the land make Goa again a land of plenty in so far as fruits and produces of the land are concerned
— Elvidio Miranda, Panaji