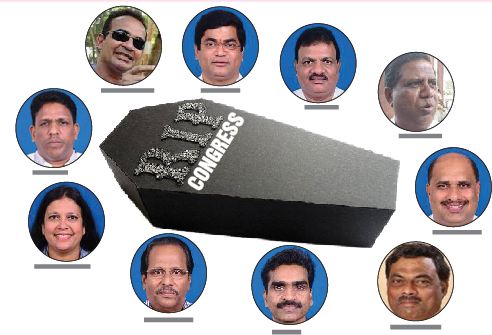 There is an old Greek legend about a ruse the Greeks used to capture Troy, a major rival kingdom. Despite a 10-year siege the invaders could not break through the fortress of the king of Troy. One of the Greeks then came up with a very bright idea. They built a huge wooden horse, hid a select force of men inside and left it outside the city, pretending to sail away. The inscription on the horse said it was an offering. The people of Troy were very curious about the horse that had been left behind by the invading army. They opened the gates of the fort and took the massive wooden horse inside. That night the men inside the horse crept out and opened the gates of the city for the rest of the invaders.
The leader of the battalion who was hidden within the Goan Trojan horse is Babush Monserrate. He rushed out of the hidden horse and opened the door wide to destroy the Congress. The majority of the Congress MLAs were desperately seeking a slice of power — a Cabinet post or at least the chairmanship of a corporation. Among the most desperate was Babush Monserrate who had agreed to contest the Panjim Assembly seat on the Congress ticket against the BJP, following the death of Manohar Parrikar. Babush has no friends or enemies. For him power is the most important thing in his life.
The defection of 10 of the 15 Congress MLAs to the BJP is not surprising. Ever since Rahul Yudishtra Gandhi abdicated his crown as president of the Congress, there has been total confusion. There is a big fight between the old guard and the young Turks on who is responsible for the miserable performance of the Congress in the Parliamentary election and who should resign.
Following in the footsteps of Rahul Gandhi, many state GPCC chiefs, including Girish Chodankar of Goa, resigned. The resignation of Girish may not have been accepted as he continues to be the president, but he has no control over the party. With the Congress party committing suicide all the rats, particularly Babush Monserrate who thought that after becoming Congress MLA, he could topple the BJP government with the help of Vijai, became frustrated. Equally frustrated was Michael Lobo who was desperate for a post in the Cabinet. Lobo felt he had been treated very badly by the BJP as he was responsible for BJP forming the government despite getting only 13 seats in the 40-member Assembly.
On Tuesday the die was cast. As many as 10 members of the Congress Legislative Party — with the exception of the four former chief ministers, Pratapsingh Rane, Ravi Naik, Digambar Kamat and Reginald Lourenço, — defected to the BJP and merged with the saffron brigade. The MLAs who defected were led by the Babush group which beside himself, included his wife, Taleigao MLA Jennifer Monserrate, St Cruz MLA Antonio (Tony) Fernandes, St Andre MLA Francisco Silveira and Canacona MLA Isidore Fernandes, who are all close friends of Babush. The other MLAs who joined the rebels were Quepem MLA Chandrakant Kavalekar, Tivim MLA Nilkant Halarnkar, Nuvem MLA Wilfred D’Sa, Velim MLA Filipe Neri Rodrigues, and Cuncolim MLA Clafasio Dias. The result is that Salcete which was always a Congress stronghold is now completely saffron.

The victims of the mass rebellion by the Congress MLAs and their merger with the BJP are the Goa Forward party and Independent MLA Rohan Khaunte. With the strength of the BJP going up from 17 to 27 it does not need the support of either Goa Forward or MGP, with whose help they formed the government. Vijai Sardesai has angered the BJP leadership by refusing to vacate one of the Cabinet seats in favour of his friend Michael Lobo. Vijai had also made it clear that his loyalty was to the late Manohar Parrikar and not the BJP as such.
Since at least the leaders of the rebel groups led by Michael and Babush have to be given kodel it was decided to drop all three Goa Forward MLAs and Independent MLA Rohan Khaunte. It is unfortunate that Rohan is being dropped; perhaps the BJP high command, which is financed by the casino lobby, does not like his attacks on Casino Pride.
The MGP, which was an alliance partner, has already been neutralised with two MGP MLAs, Babu Ajgaoncar and Vinoda Datarama Paliencar, merging with the BJP, isolating Sudin Dhavalikar who was dropped from the Cabinet.
The rebellion by 10 of the 15 Congress MLAs does not attract the disqualification laws under the People’s Representation Act. Under the act, Independent MLAs who change their parties, have to resign and re-contest as Viswajit Rane did when he quit the Congress party to join the BJP. Similarly, if any single member of a recognised party defected to the ruling party he or she would be liable to be disqualified. But for some absurd reason while motorcycle pilots and autos cannot travel on the new Mandovi bridge but cars can, if 2/3rds of the MLAs of a legislative party defect or merge with the ruling party, it does not attract the provision of disqualification. The moral being that large groups can defect or even smaller groups as in the case of the MGP where two MLAs constituted 2/3rds of the MGP Legislative party as the party had only three MLAs.
The BJP has played dirty tricks ever since the results of the 2017 elections were declared. In the 2017 election, to its surprise, the BJP got only 13 seats while the congress got 17 seats. The BJP numbers increased to 14 when Vishwajit Rane quit the Congress and joined the BJP. While the Congress leaders were still fighting among themselves, Nitin Gadkari rushed in from Delhi and bullied both the Goa Congress and the MGP to enter into an alliance with the BJP along with four Independents which result into hijacking of the government by Manohar Parrikar.
Interestingly the condition imposed by both the MGP and the Goa Forward was that they would extend support to the BJP only if Manohar Parrikar was the CM. Both Vijai Sardesai and Sudin Dhavalikar were rewarded with the post of deputy CM. This is followed by a year when there was no governance in Goa because Manohar Parrikar developed pancreatic cancer. Clearly, the BJP high command is not confident that Pramod Sawant will be able to control all the greedy MLAs and their alliance partners. So in a major coup they grabbed 10 of the 15 Congress MLAs to make themselves invincible.

For Goa this means the death of democracy. When there are elections you vote not only for a candidate but the party he represents. It is clear from the results of the 2017 election that the choice of the people of Goa to form the government was the Congress with the GF. After Parrikar died and before the by-election, Vijai Sardesai was even offered the CM’s post by Babush to topple the BJP government. When he found that the Congress high command had disintegrated following the resignation of Rahul Gandhi he decided that the BJP was the only hope of acquiring power in Goa.
But this is murder of democracy because the people voted not for the BJP to rule Goa but for the Congress. As Utpal Parrikar, eldest son of Manohar Parrikar, has rightly put it, the BJP has lost all principles since his father’s death on March 18, 2019. Even the talk of building a memorial for him next to the Bandodkar memorial on Miramar beach has been forgotten with the aluminium sheets blown off in the wind and dogs wandering on the site of the proposed memorial. Truly, Goa and the Congress in the State have gone to the dogs.

Those who betray others should be prepared to be betrayed in turn.
Vijai Sadesai, the MLA from Fatorda, double-crossed the Congress to join the BJP. The deal which had been decided before the election was that Goa Forward would support the Congress to form the government if it fell short of numbers. When the Congress unexpectedly got 17 seats, it could have easily formed the government with the three MLAs of Goa Forward and the four Independents. Indeed, Vijai had set up a negotiation committee which included Datta Naik and Cleofate Coutinho to get the best deal for the Goa Forward from Digvijai Singh, high command observer of the Congress. But even as the meeting was in progress one of the negotiators got a call from Prashant Naik, now the treasure of GF, that Vijai was already in the Raj Bhavan with Manohar Parrikar and Nitin Ghadkari.
Vijai should have anticipated his humiliation by the BJP after they got the two MGP MLAs — Babu Ajgaonkar and Deepak Pawaskar — to merge with the BJP, leaving Sudin Dhavalikar isolated. The arrogant Vijai now has got his just desserts as he, along with his two MLAs, have been sacked.
We however regret the sacking of the Porvorim MLA Rohan Kaunte who was doing his best to ensure that the private sector in Goa gives preference to locals in jobs. Maybe he was a victim of the Casino lobby for speaking up against the Casino Pride group.

BJP workers vehemently opposed what they called “Bongressiation” of the BJP. Leading the attack was Utpal Parrikar, son of the late Parrikar said party workers particularly in Panjim were insulted by the BJP high-command taking Babush into the fold. Senior BJP leaders including former BJP chief minister Laxmikant Parsekar pointed out that this would destabilise the party. Now the Congress accounts for 2/3rds of the MLAs of the BJP in the legislature. This means they can break away and defect anytime they want to. It is the fault of the Congress that they did not accept an offer from Babush to topple the BJP with the help of Vijai Sardesai and the Independents. Other senior leaders like Rajendra Arlekar also opposed the entry of the 10 Congress MLAs.
The last straw was the U-turn made by the chief minister Pramod Sawant of replacing Vinod Palienkar by Michael Lobo in the Cabinet. We understand that Vijai Sardessai had agreed to the deal and then backed out. Michael who was responsible for bringing Goa Forward and making them join the coalition has not received his expected reward. He was only given the post of Deputy Speaker when he expected the post of Tourism Minister. After the death of Manohar Parrikar Michael Lobo was offered the Speakers post. This was adding insult to injury as the Speaker has to remain silent and neutral.
Earlier, Michael who has a talent for making friends had become close to Babush Monserrate also. Babush realised that following the exit of Rahul Gandhi he had no future in the Congress. When he was approached by Michael he readily agreed that he and his group which included Jennifer, Tony Fernandes, Silveira, Pandurang Madkaikar and Filipe Neri were willing to switch sides. With half a dozen Congress MLAs switching over, Chandrakant Kavlekar the CLP leader also joined the group along with other minority community MLAs. Salcete is very angry that all the Catholic MLAs have turned saffron overnight.