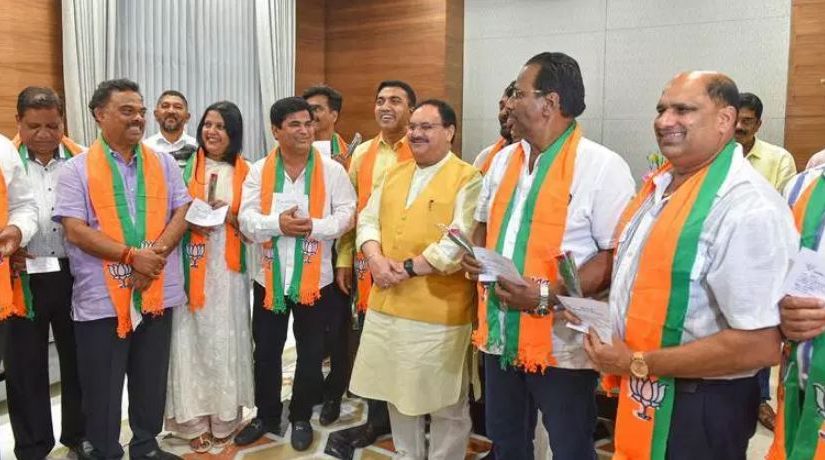 WORRYING: If J P Nadda takes a close look at the picture of himself with the defectors from Goa, he might realise that there was nothing to be smug about. And, a great deal to worry about

The political turmoil in Karnataka and Goa has been dramatic and shameless. There can be no ‘winner’ in such situations. Everyone’s a loser — the ‘losing’ parties, the common man, the economy, democracy and even the ‘winning’ BJP

It was that picture in the newspapers last week that set me thinking. In it we see the squat, smug figure of the BJP’s working president surrounded by legislators from Goa wearing scarves of saffron and green with a white lotus prominently displayed on them.
These were not the colours or the symbol that got them elected, but in this moment of shifting loyalties, they have shifted to a party that till just the other day they reviled as ‘communal’. In this picture, the BJP’s working president and Goa’s Chief Minister look pleased to welcome them into the fold. But, they should be worried. As should Narendra Modi and Amit Shah. They should be worried because the political instability in Karnataka and Goa is more dangerous for the BJP than the Congress party.
Toppling state governments may not have been at the root of our oldest political party being rejected by India’s voters, but it was the reason why this party came to be seen as dishonest and duplicitous. Indira Gandhi was the master of this political manoeuvre. When she used it to topple Farooq Abdullah’s government in 1984, she began, in my view, the current phase of our problem in Kashmir.
Farooq was removed in a deceitful, cynical way and this reminded Kashmiris that they would never be allowed to have real democracy. Just months later, when Mrs Gandhi toppled NTR’s government in Andhra Pradesh, she managed to unite every opposition party against her. NTR did not take his dismissal lightly. He turned up in Delhi with more than 160 MLAs to prove to the President that he had been wrongly dismissed. Mrs Gandhi ended up sullying her own image.
Narendra Modi has just won a stunning victory in the general election. Does he want to risk doing the same thing? More importantly, does he want a lot of untrustworthy, disloyal people to join his party? The Indian Express did a stellar service last week by introducing us to the 16 men who could bring down the wobbly government in Karnataka. In a story that appeared last Friday called ‘Karnataka’s 16: Who they are’, we discovered exactly why they were unhappy. Most of them were deserting the Congress party’s sinking ship because they were not made ministers.
Is this the kind of politician that will help Modi fulfil his dream of a new India? And in this new India, will we continue to see the sordid spectacle of unreliable defectors locked up in fancy resorts in cities far away from their own to ensure that they do not change their minds? For me personally, the ugliest aspect of the Karnataka episode was the manner in which the defectors were brought to Mumbai and confined in a 5-star hotel. Who paid the bills? Who paid for the private jet in which they were flown back to Karnataka and then flown back again? There are unverifiable but nasty rumours of big money.
If this kind of drama happens in the near future in Madhya Pradesh and Rajasthan, as some analysts predict, then are we really going to see a new India? Or are we going to see the BJP turn into the Congress party of yore?
In its glory days it routinely got rid of state governments that did not conform to its ‘idea of India’. The first time was when Indira Gandhi, as Congress general secretary, dismissed the Communist government in Kerala in 1959. E M S Namboodiripad had been chief minister for just two years when he was ousted. To this day comrades continue to believe that Mrs Gandhi was paid to do this by the CIA. To this day even those who despise communism, like your columnist, acknowledge that what happened was wrong.
This event occurred when I was still in school. But, I was witness to the whole squalid drama that the Congress played in order to justify the toppling of Farooq’s government. First, he was slandered as a secessionist. Then 13 of his MLAs were persuaded to defect to his brother-in-law’s band of malcontents. Gul Shah was unhappy because he believed he should have been Sheikh Abdullah’s heir. He became chief minister with the support of the Congress party but was so hated that he seemed able to rule only through endless spells of curfew. He came to be known as Gul-e-Curfew (curfew flower).
This was politics as usual in the old India. If the Prime Minister is sincere about creating a new India, then he will have to create a new political culture. It should be one in which defectors are not welcomed into the BJP as if they were heroes.
If J P Nadda takes a close look at that picture of himself with the defectors from Goa, he might realise that there was nothing to be smug about. And, a great deal to be ashamed about.

WHERE’S THE MONEY COMING FROM?
As the battle in Karnataka heats up, people are aghast at the money that’s being spent and wondering how the parties are planning to recoup their expenditure from people’s pockets. As more MLAs jumped ship and shuttled between Bengaluru and Mumbai on chartered flights, the rebels and political parties moved the Supreme Court and hired the services of advocates who charge a few lakh rupees per hearing to fight their cases. All three parties have splurged crores of rupees on tucking away MLAs at resorts or star hotels since the current political imbroglio began. A special flight from Bengaluru to Mumbai comes with a bill of around `4 lakh per trip, and the rebel MLAs have hired special flights at least five times since the crisis unfolded. Some sources estimating that parties paid an average of 20 crore per MLA. “Even at conservative estimates, each party spent around 50 lakh on hotels and flights over the course of just a few days” estimated an observer.