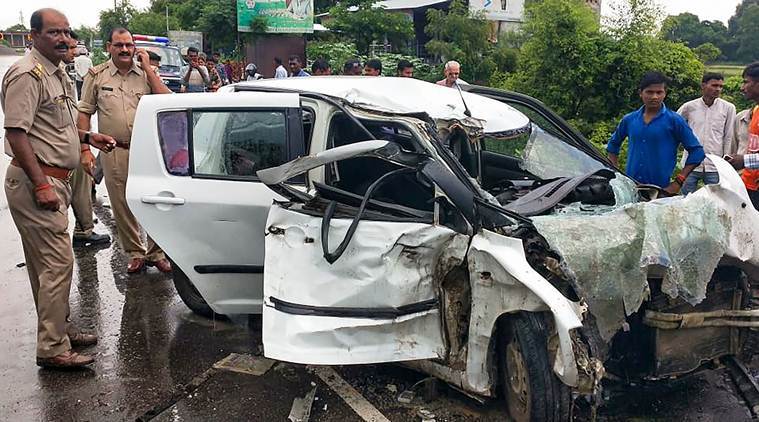 HARASSMENT: Many non-Hindu migrants who come to Goa are from BJP-ruled states where they are allegedly forced to say Jai Shri Ram under the threat of being assaulted or even burnt alive by extremists who seem immune to police action. Deteriorating law and order situations have affected all those without political clout (In pic – Police and people stand near the wreckage of the car in which the Unnao rape survivor was travelling during its collision with a truck near Raebareli, Sunday, July 28, 2019)

There are reports that trainloads of Biharis are descending on Goa every Monday. The direct train from Patna, the capital of Bihar, arrives in Goa once a week, on Monday. The presumption is that all these people have come to Goa looking for work.
Similarly there is a direct train from Delhi to Nasik. This is the entry point for all those coming from Nepal to find jobs in Maharashtra and Goa. Nasik is a flourishing industrial city, but wages are less than in Goa. The already large network of Nepalis in Goa invite them to come to Goa, where wages for unskilled contract labour are the highest in the country.
Particularly now in the monsoons, when there is a desperate shortage of labour, wages can go up to 1,000 per day, along with food and may be a shot of feni. This is because generation next of Goans have either sold their land to builders or are not interested in doing farm work. I speak from personal experience as several police constables who have been attached to me over the years from Mandrem in Pernem have given up agriculture, as there is nobody to till the fields. In the ‘80s and even the early ‘90s it was a common sight to see women in colourful plastic semi-raincoats transplanting paddy. Those who have land, now prefer to use tractors and combine harvesters. These have always been available on hire from the mechanical cultivation department. Now they are lent by the local MLA to those who want to do farming. Last year there were photographs of Congress MLA Aleixo Reginaldo Lourenco and later the then IT Minister Rohan Khunte driving tractors as part of a challenge to create awareness about farming. The pattern is very familiar. If hundreds or thousands of labourers from UP, Bihar, Orissa and Nepal are coming to Goa it is not only because the wages are much higher in Goa than in their own states. Forget about UP and Bihar there is a huge difference in daily wages between Belgaum and Hubli and Goa. In Belgaum and Hubli an unskilled worker will be lucky if he gets a daily wage of100. In a book printing press in Belgaum I found women working eight to twelve hours a day binding books for `2,000 per month.
But there are other factors which are responsible for the mass migration. It is clear from the kind of people who are coming to Goa that the majority are Dalits, Christians and other lower castes. They are coming to Goa because nobody gets lynched in Goa on the suspicion of storing beef or selling beef as is happening in UP and Rajasthan. Nobody in Goa forces you to chant Jai Shri Ram unlike in Yogi Aditiyanath’s UP. Even if you are a Muslim you have to chant “Jai Shri Ram” if you value your life. In Hindutva strongholds in the noth, there have been many cases of even sarpanchs and MLAs being beaten up because they refused to chant “Jai Shri Ram”.
Lower castes are migrating in large numbers from UP and Rajasthan because unlike in Goa there is religious and caste-based oppression in those states. The recent case of a Zomato user who proudly tweeted about refusing to accept food delivered by a non-Hindu delivery boy has gone viral. Zomato rightly stood by their delivery boy, tweeting, ‘Food has no religion’. But several thousands of suporters have emerged, claiming to have uninstalled the Zomato app in support of the bigot.
In Goa, of course, nobody cares whether you are a Chamar or Dalit or any of the so-called scheduled castes and tribes. It is inconceivable that doctors in medical college would taunt and humiliate a senior resident into committing suicide like it happened in Mumbai recently. People come to Goa because they know that Goa is a cosmopolitan state where all communities live together in harmony. Since Liberation there is been only a single communal riot in Goa in 2006 in Curchorem which was instigated by the RSS, which spread rumours that Muslims from Hubli were coming to attack the Hindus in Curchorem and Sanvordem. But there were no lives lost, although property belonging to Muslims, including cars and shops, was targeted.
However, this was a rare exception and the very fact that 16 of the 27 MLAs of the ruling party are from the minority Catholic community is a guarantee that there will be no communal problems in Goa. Despite changes in government, Mutalik, the Ram Sene chief who notoriously targeted BPO girls visiting night clubs in Bangalore, has been barred from entering Goa.

There is another important factor which provokes migration as dramatized by The Indian Express which you can see on the next page. The Indian Express analysis of the 2011 census data showed that over the decade from 2001 to 2011, 14.2 crore residents of India migrated from their home states to other states. In the case of women of course one of the main reasons for migration was marriage. But in the case of men it was clearly the desperate search for jobs. With farmers in every part of the country resorting to mechanization the need for labour for agriculture purposes has come down very sharply. Those rendered unemployed have to move to urban centres for jobs. It is logical that labour will move to cities where they get the best wages.
The Indian Express survey surprisingly indicates that Surat, after Mumbai and New Delhi, has become the biggest centre for migration. This survey is based on the 2011 census. If you go by what has happened since then, you will find that in proportion to their population, Kerala and Goa account for the largest number of migrants.
In the case of other states in the country the extent of migration depends on how well the economies of their home states are performing. Migration from Bihar to Mumbai and other urban centres actually declined during the earlier tenure of Nitish Kumar who created thousands of jobs in Bihar itself. Similarly, due to the ambitious industrial development carried out in West Bengal, Chennai and Gujarat, there was no outward migration, but people came from the poorer states to take advantage of the jobs available in the developed states.
What is unique about Kerala and Goa is that the locals prefer to migrate to the Gulf or any other country which will offer them a much higher salary than in Goa. Like in Goa, the people of Kerala do not like to do menial jobs like collecting garbage or even working as electricians and plumbers. Mind you they do not mind mopping the Heathrow airport in London because they get 10-15 pounds per hour (8,000-12,000 per 8-hour workday) for doing so, unlike CCP sanitation workers who get only `800 a day and have not been confirmed in spite of having worked for over 20 years.
It is the jobs that Goans are not willing to do which are filled up by people from outside. There are now more Goans outside Goa and outside the country than in Goa. My rough estimate would be that already the number of migrants in Goa have crossed the number of locals.
There is concern bordering on paranoia about outsiders coming ‘by the train load’ to Goa because not only is infrastructure insufficient for the rapidly expanding population, but Goans who have remained behind are afraid that the outsiders will settle down in Goa permanently and soon capture the few government jobs that are available. There have been many instances of bhaile changing their names officially in the gazettes so that they will be seen as Goans and particularly Goans from the OBC who have preferences in both education and employment. There is the case of Rayappa who changed his name to Shirodkar. Or Lamanis who changed their surnames to Gauda or Velip. Goans don’t mind migrants taking up the jobs they don’t want. But they do object to them trying to grab the few jobs available to Goans.

Ultimately, the problem is skilling. There are enough industries in Goa. The hospitality industry is huge and there are hundreds of big and small hotels. Admittedly there are more than a dozen hotel management institutes. But as far as we know only one of them is recognised by the Central government. Others claim to be affiliated to the Kamraj university. This lack of recognized skilling comes in the way of Goans getting jobs even as interns in 5-star hotels. The 5-star hotels know that very few Goans will continue to work in Goa at the rates paid here. Most of them are only interested into certificates so that they can catch a ship.
We have to train our people. Then more industries will come up and they will start paying better too. Just to give an example the Mopa airport is coming up in three years. We know of a senior aeronautical engineer who is willing to set up training facilities which are internationally recognised for servicing and maintaining aircraft. These can generate thousands of jobs as every time a flight lands or takes off it has to be checked out. Similarly, we have to train people in the data sciences and in 3d printing and artificial intelligence which are the skills that will be needed in future.
There is another category of migrants who are equally harmful to the interest of Goa. For the last decade or more, literally thousands of the bold and the beautiful and the rich and the powerful have bought second homes in Goa. This is partly because hotel rates are so high that it is cheaper to have your own residence. But in most cases parents and grandparents have chosen to retire and settle down in Goa which they find much more peaceful and cosmopolitan than their homes cities like Mumbai or Kolkata. For the Delhite, a lavish flat in a gated colony by the sea is a substitute for a farm house. These rich migrants have sent prices of property and land soaring sky high. Flats which were available for 20 to30 lakhs in 2000 now cost over 1 crore. The flats in the Tarcar estate in Odxel can cost as much as5 crore. There are many foreigners who have bought old Goan houses which the broker advertises as Portuguese houses. This has made it impossible for the average Goan to buy even a one BHK in Goa. Every one of the rich migrants has at least one, if not more, huge SUVs, which contribute to the traffic congestion in Goa.
Although highly skilled, very few of them contribute their talents to improve the conditions of the locals. It is these upper class migrants and their visitors who are the main customers of the taxi mafia as only they can afford them. We have to be as careful about the rich migrants as the poor migrants. Admittedly the poor migrants lead to the sprawl of slums and open defecation. But builders who make crores should be forced to provide decent accommodation and toilets to the workers.
The problem is once a migrant comes to Goa nobody wants to go back. They prefer living in tiny rented huts to going back to their villages where they have homes and family, but no security or funds to look after them.