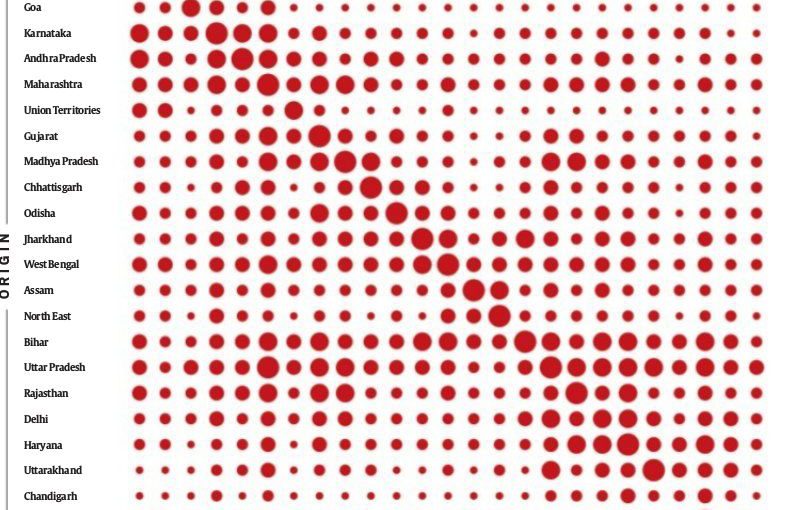 INDIAN STATES: Intra-state migration continued to form the largest share of migration. Almost 11.87 crore of the 14.2 crore migrants (over 83%) between 2001 and 2011 moved within their states. As you can see, Goa received the highest number of migrants from Karnataka, Maharashtra and UP

According to the 2011 census 14.2 crore Indian citizens migrated from poorly governed backward states like UP and Bihar to fast developing cities like Surat and Goa. In the 2021 census you will see the migration gathering momentum with more people from northern states shifting to the more prosperous southern states. Migrants come to Goa for exactly the same reasons that Goans go to London…

In a country with a long and often violent history of sons-of-the-soil politics, migration is a politically fraught issue. From the attacks on south Indians in Mumbai in the 1960s and 70s to the Northeast’s identity debates, and the anxiety over “Bangladeshi influx” in West Bengal to the unsettled row over the National Register of Citizens (NRC), the changing numbers of its people are more than just a figure for a population on the move due to India’s robust economy, while competing for its limited resources.
Amidst a global rise of anti-immigration sentiments, riding on populism, this politics is also up close and central back home now. In West Bengal, the BJP’s allegation against other parties of treating illegal Bangladeshi migrants as a vote bank will gather pitch as it makes a bid for power in the state come 2021, while wielding the NRC as a sledgehammer. In Maharashtra, the BJP’s clever distancing from the Shiv Sena and its anti-migrant rhetoric before the 2014 Assembly elections was directed as much at its vote banks in Uttar Pradesh and Bihar, as the migrant settlements in the Pune-Nashik-Mumbai-Thane urban conglomeration.
The gamble paid off, when the BJP, contesting all 60 seats in Mumbai-Thane for the first time, won more seats than the Sena here. Even in national capital Delhi, the tussle between the Aam Aadmi Party and BJP over the Poorvanchali base is no-holds-barred and transparent, partly the reason why the BJP has stuck to Bhojpuri actor-turned-politician Manoj Tiwari as its state chief through thick and thin. The BJP has also used its state satraps strategically, whether it is Uttar Pradesh Chief Minister Yogi Adityanath across the country or Petroleum Minister Dharmendra Pradhan, an Odia, in cities like Surat, with its high number of migrants from the state, in the run-up to the 2017 Assembly elections in Gujarat.
Occasional attacks on migrants — be it north-Indians in Maharashtra or Gujarat, or those from the Northeast in Bengaluru — add fuel to the churn.
But, how much of this is supported by the latest data on migration released by the Census of India?

UP, Bihar lead the way